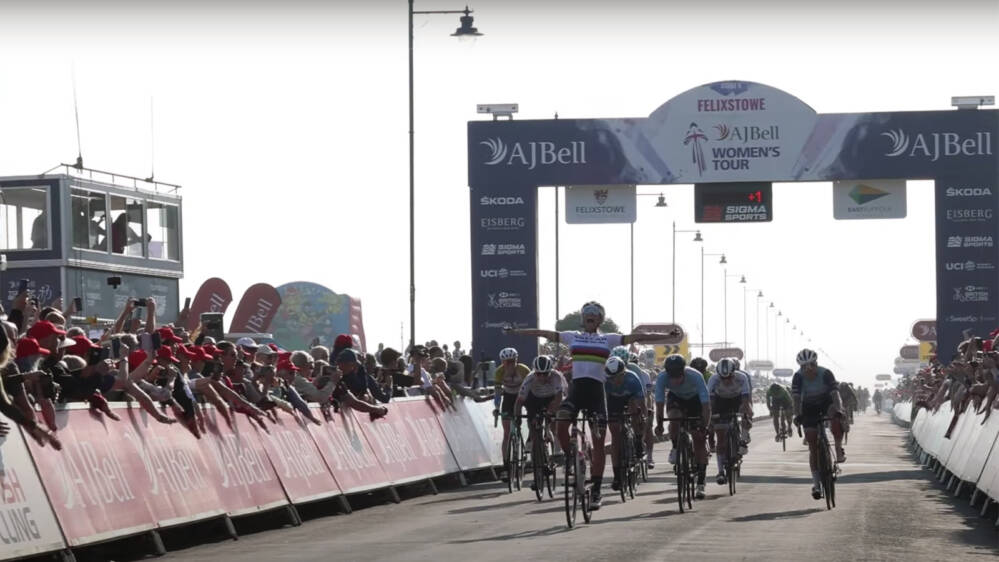 The final two days of last year’s Women’s Tour across the East of England generated an economic boost of £1.5m for the local area.

The final two days of last year’s Women’s Tour across the East of England generated an economic boost of £1.5m for the local area.

A total of 138,000 racegoers attended the Colchester to Clacton (Friday 8 October) and Haverhill to Felixstowe (Saturday 9 October) stages, nearly 50,000 of whom travelled from outside the host regions specifically to see the event.

The stages were won by two of the biggest stars in cycling today: Dutch sprinter Lorena Wiebes (Team DSM) triumphed along the coast in Clacton, before Elisa Balsamo (Valcar – Travel & Service) claimed her first victory in the world champion’s rainbow jersey in Felixstowe.

Jonathan Durling, Women’s Tour partnership director, said: “The results of the economic impact report for the Suffolk and Essex stages speak for themselves in the huge success that the 2021 race was. With the 2021 race featuring two stages in Essex before our final leg in Suffolk, the region will have benefited from the number of nights that not just spectators, but also teams and organisers spent in the area – during both the planning of the race and the event itself.

“We know that the past two years have been particularly challenging for the tourism and hospitality sectors, but these are both groups that will benefit from events like the Women’s Tour. Whether the Women’s Tour or the Tour of Britain, the races have always enjoyed a tremendous reception in Suffolk and Essex. The races are a fantastic platform not only for local businesses to engage their workforce and the wider community, but also to be associated with a world-class sporting event coming to the region. Quite simply, it’s the support of local stage partners that make the race possible.”

Lynn Warner, engagement manager for the East of England Co-op, added: “It was clear to us that the Women’s Tour would have a really positive impact on the local economy. By collaborating with stage five organisers Colchester Borough Council, the sponsorship presented us with significant opportunities, including the promotion of our new store at Chesterwell in Colchester, the recruitment of members in a new trading area for us, and highlighting our work in the local community.”

Alex Porter, cabinet member for leisure and tourism at Tendring District Council, said: “Hosting large and prestigious events such as the Women’s Tour is an important aspect of our local tourism economy, not only in visitors they attract directly but also in promoting the Essex Sunshine Coast to those who catch associated media coverage. This in turn supports local businesses and is good for our town centres and high streets. That is why we continue to bring back established events, such as the Clacton Airshow, as well as look to attract new ones too. Hopefully as the COVID-19 situation settles we can look forward to more large-scale events once more.”

Sam Good, business improvement district manager at Our Colchester, added: “It was a real coup for Colchester to host the Women’s Tour in 2021, a year that saw its fair share of challenges for the business community,” he said. “The buzz that was created both locally and nationally had a really positive impact on Colchester as a whole. “Events like this, which bring people and businesses together, help instil a feeling of pride in the town and showcase to residents, visitors and workers the many exciting things happening in Colchester.”

Julie Clark, Haverhill town centre manager, said: “Heart of Haverhill was delighted with the success of the Women’s Tour and the positive impact it had on our town and local businesses. We organised a very successful bike trail which linked 25 local businesses and our local community together and helped promote the race. We also hosted a breakfast event for businesses to learn more about the event and a static bike ride for two local charities. The Women’s Tour helped showcase everything that is good about Haverhill.”

Business leaders are also hopeful that the success of the event will help to encourage more major sporting events to our region, which will help our economic recovery from the pandemic.

Richard Hunt, strategic lead of visitor economy at Suffolk Growth Partnership, said:“The success of the Women’s Tour 2021 is excellent news for Suffolk and demonstrates the impact that can be achieved through partnership. The Tour has made a significant contribution to our local economic recovery and consolidates Suffolk’s position as a centre for major outdoor sporting events.

“As our recovery from Covid continues, we will work with our partners to ensure Suffolk remains a leading visitor destination for both local, national and international visitors, and that we can secure sporting events such as this in the future, that add so much value to the visitor economy.”

Attractions to widen the appeal of the Tour, such as FelixFest, which was organised by East Suffolk Council and took place on Felixstowe’s seafront over the weekend of the race, provided additional opportunities for businesses to maximise on the event.

“The Women’s Tour was a fantastic event,” said Tom Evans from The Boardwalk Café Bar in Felixstowe. “Not only did we see an increase in footfall during the daytime, our evening event was very well attended with people staying to enjoy the views and late evening sunshine on the pier.”

And while the hope is to attract other sporting events, plans for this year’s Women’s Tour are already underway, with partners in Suffolk and Essex working together to host a stage, which will tie in nicely with celebrations for the Queen’s Platinum Jubilee.

Ian Surtees, group chief executive officer at Vertas, said: “Vertas was proud to be a stage six partner of the Women’s Tour, not just because it was the culmination of such a prestigious sporting event but also because of the impact the event itself had on the local economy. We are delighted to announce that we will once again be a supporting partner of the Suffolk stage of the tour in 2022 and look forward to seeing the benefits to Suffolk businesses in the Queen’s Platinum Jubilee year.”

For more information about getting your business involved in the Women’s Tour 2022, email womenstour@colchesteramphora.com for Essex businesses, or colin.grogan@suffolk.gov.uk for Suffolk businesses.