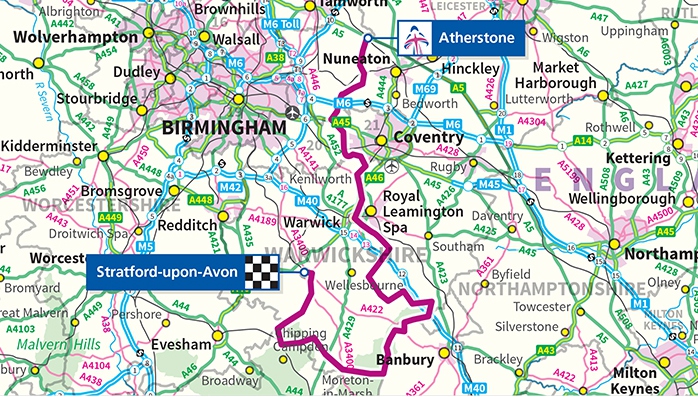 Warwickshire will welcome the world’s top women cyclists this June as the county hosts the Aviva Women’s Tour for the first time ever on Thursday 16 June 2016.

Warwickshire will welcome the world’s top women cyclists this June as the county hosts the Aviva Women’s Tour for the first time ever on Thursday 16 June 2016.

The world’s top racers, including the likes of World Champion Lizzie Armitstead and reigning Aviva Women’s Tour Champion Lisa Brennauer, will race the full length of the County from Atherstone to Stratford-upon-Avon in the second stage of the world leading race.

96 of the world’s top cyclists will make up the field, which will tackle the 140-kilometre stage through the heart of the county, passing through the likes of Atherstone, Kenilworth, Warwick, Shipston-on-Stour and Stratford-upon-Avon.

Leader of Warwickshire County Council, Cllr Isobel Seccombe, said: “Warwickshire is giving its full support to the Aviva Women’s Tour and we are truly excited to welcome this significant event to our beautiful County. We intend to embrace the opportunities the Tour will bring, by showcasing the County as the best place to invest, live, work and visit as well as helping to encourage more women and girls into cycling and sport in general.

“A sporting event of this scale brings with it a number of key benefits, ranging from public health and education to economic growth and tourism, all of which are key priorities for the County.  More importantly, the Aviva Women's Tour puts Warwickshire on the international sporting stage and as a place that has the skills, infrastructure and environment to make it a great success.  We will be working closely with business, communities and schools to maximise support and engagement before, during and after the Tour.”

“Stage Two will be a first for SweetSpot as an organisation as it takes place entirely within Warwickshire, a county we have never visited before.  The stage takes place through some beautiful Warwickshire scenery with several testing climbs in the south of the county in the final third of the stage, before what we hope will be a very popular finish in the centre of Stratford-upon-Avon.

“Many of the roads used are familiar to me from my training rides when a professional, so we know how good the area is for cycling, while we hope the proximity to the cities of Birmingham and Coventry will bring fans out to the roadside in large numbers.” The Warwickshire stage comes on day two of the race, which will begin at Southwold on the Suffolk coast with the opening stage finishing in Norwich on Wednesday 15 June.

Subsequent stages will take the race to Derbyshire, Nottinghamshire and Staffordshire, before the final day of racing in Northamptonshire, between Northampton and Kettering, on Sunday 19 June.

Further news about the detailed stage routes, including the locations of Strava Queen of the Mountains climbs and the Chain Reaction Cycles Sprints, along with timings will be announced in the coming weeks along with the teams for the 2016 Aviva Women’s Tour.