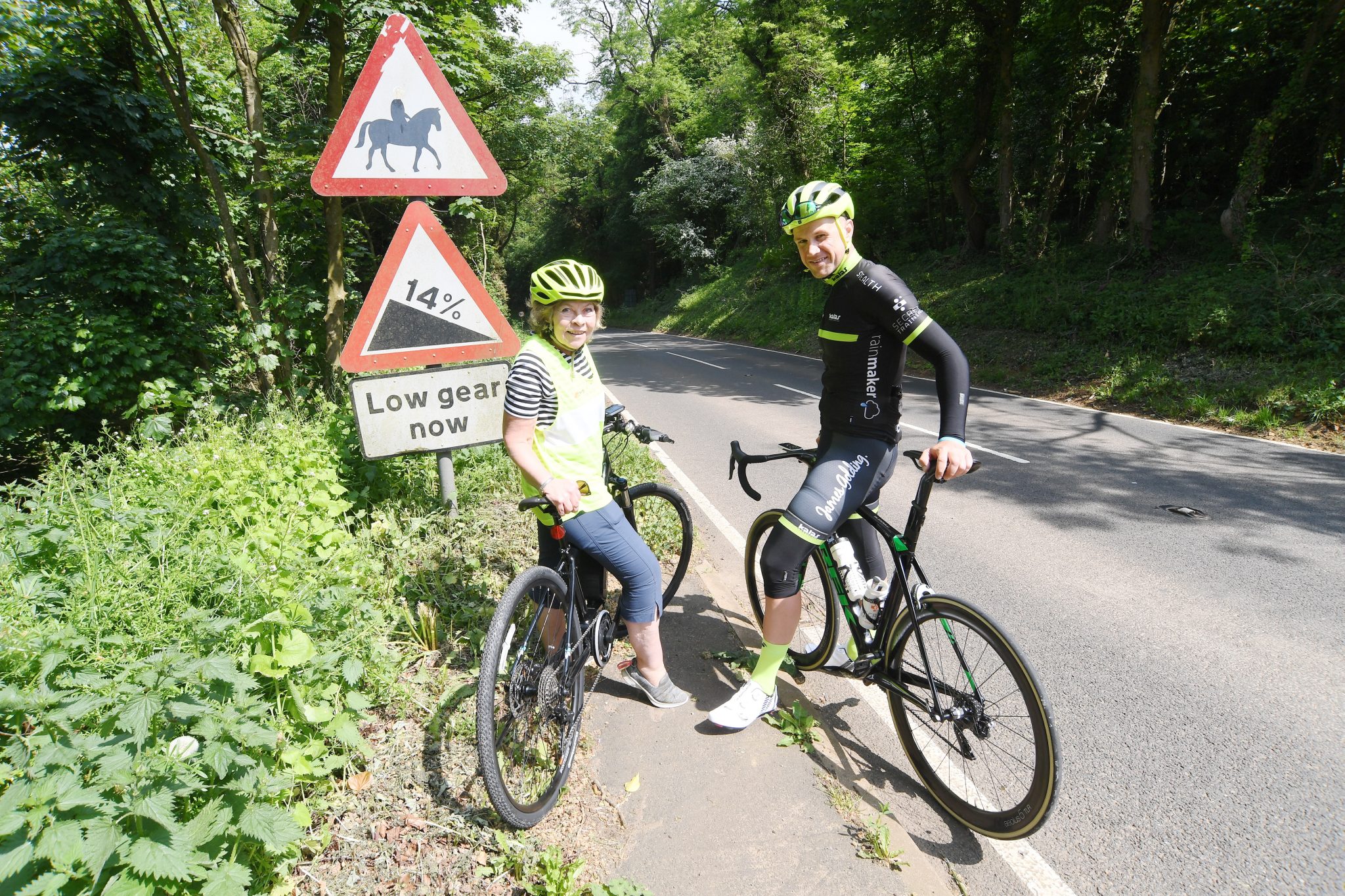 Cllr Izzi Seccombe, the leader of Warwickshire County Council, has experienced some of the steepest sections of the international cycle event which is coming to the county this month – with the help of two friends.

Cllr Izzi Seccombe, the leader of Warwickshire County Council, has experienced some of the steepest sections of the international cycle event which is coming to the county this month – with the help of two friends.

On its way, on Friday 15 June, it will pass up Edge Hill and scale the Burton Dassett Hills before heading to Leamington town centre. All the details of Stage Three can be found here.

Warwickshire County Council has worked with tour organisers SweetSpot to bring the event back to the area so Cllr Seccombe thought she should experience some of the bumpier sections of the ride for herself.

She enlisted the help of Rugby-based world endurance cycle record holder James Golding, who has raised more than £3 million for charity after twice overcoming cancer, to help her pedal up the 14 per cent Edge Hill.

James, who is planning to become the first Brit to win the 3,000 miles Race Across America, also lent her a state-of-the-art electric-assist bike for the trip and accompanied her on the road bike.

After making it to the top, Cllr Seccombe, who admitted to not having ridden a bike for “some time”, said she could understand what the 102 competitors will go through.

“I had a great deal of help from James and my bike but cycling up Edge Hill certainly made me realise just how fit the women athletes have to be to complete five stages in successive days without the assistance I had,” she said.

“It also underlined a couple of other important factors. Firstly, just how magnificent the countryside in Warwickshire is, and why the organisers were keen to return here, because the views were stunning.”

Cllr Seccombe also noted the impact that hosting a stage of the tour had on the local economy as she urged local people to come out and support the event next month.

She said: “When we first held a stage two years ago it made a £2 million impact to the local economy and we hope that will be higher this year. The stage will be viewed in more than 100 countries across the world and will be a great showcase for the assets we have.”

James, who is a finalist in the Pride Of Britain Awards as Fundraiser of the Year and who covered 1,766 miles in seven days for take his record, said that Cllr Seccombe appeared to have been bitten by the cycling bug.

“You still have to put in the effort on an electric-assist bike, and Izzi flew up the hill – it really was quite impressive,” he said

“The electric-assist bikes mean cycling has become even more accessible for all ages and abilities and, like Izzi, even if you haven’t ridden for decades you can now jump on a bike and enjoy riding with friends, groups and some of the toughest hills around.

“It is really good to see the OVO Energy Women’s Tour returning, and that Warwickshire County Council has put so much into staging it because it can have a real impact on inspiring people to be active.

“Cycling is still very much a growing sport and I know from my miles on roads around Warwickshire that we have some fantastic terrain and can offer cyclists a bit of everything.

“I hope that I see Izzi out on the road well after the event has been and gone!”

STOP PRESS! Last night (Tuesday 5 June) it was announced that Warwickshire would also welcome the men’s OVO Energy Tour of Britain on Wednesday 5 September with a route that will also feature the climb of Edge Hill. You can check out details of September’s event here.