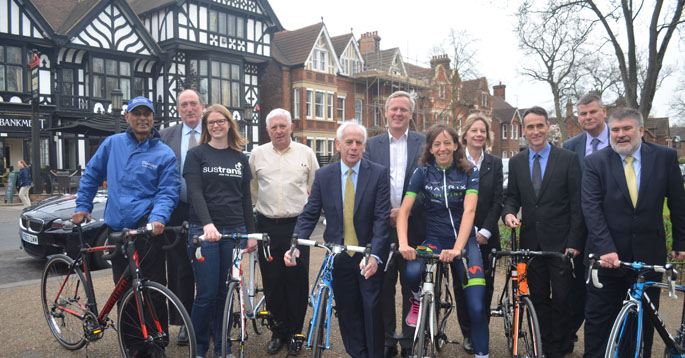 On Wednesday Bedford Borough Council launched the Stage 2 finish for The Women’s Tour on the embankment. Matrix Vulpine rider Helen Wyman, local to the area, joined in proceedings.

On Wednesday Bedford Borough Council launched the Stage 2 finish for The Women’s Tour on the embankment. Matrix Vulpine rider Helen Wyman, local to the area, joined in proceedings.

The world’s best cyclists will race through the streets of Bedford on Thursday 8th May when The Women’s Tour comes to the borough.

The Women’s Tour is the country’s first ever international stage race for women and will see the world’s very best cyclists, including four reigning Olympic Champions, racing wheel to wheel through the streets of Bedford.Eleven of the world’s top fourteen teams have confirmed their entry, including the Wiggle Honda team of British Olympians Laura Trott, Joanna Rowsell and Dani King and the Olympic road race champion, Marianne Vos.

The Mayor of Bedford Borough, Dave Hodgson; Bedfordshire resident and leading female cyclist Helen Wyman, Women’s Tour organiser, Guy Elliott and sponsors University of Bedfordshire, the Harpur Trust and BedfordBID, officially unveiled the race route through Bedford yesterday – just yards away from the site of the finish line on the 8th May.

Thursday 8th May is the second and longest stage of the 5 day stage race and starts in Hinckley, before travelling south and entering Bedford Borough along Hinwick Road. The cyclists then race past Harrold, Carlton, Turvey and Bromham and into Bedford. The peloton will then pass some of the best parts of Bedford, offering superb vantage points for spectators including Kimbolton Road, Bedford Park, De Parys Avenue and High Street before a sprint finish along The Embankment.

“The sight of elite cyclists racing through the streets of Bedford Borough will provide a tremendous spectacle for people of all ages to enjoy.  With a range of activities and events taking place on the day, this is set to be an extremely exciting sporting occasion for the Borough.”

Helen Wyman is from Bedfordshire and has won multiple national and European championships and has represented Great Britain on numerous occasions and has also won a World Championship bronze medal in cyclo-cross.

Helen will also be leading the Matrix Vulpine team in The Women’s Tour and added: “It is extremely exciting to be taking part in the country’s first ever international stage race for women. It is also an added bonus that the race is coming through my home county and I cannot wait to get racing in May.”

Guy Elliott, Director of the event organiser, SweetSpot, also commented: “We are delighted to formally unveil the route for the second stage of The Women’s Tour. Bedford is already known to many as the home of women’s racing as the borough has hosted the Bedford 3 Day stage race for many years and it is right that we are able to bring the inaugural race here.

“I am sure many spectators will line the route on the 8th May and cheer on the world’s best cyclists when they race through the borough this Spring!”

Eleven of the world’s top fourteen teams have confirmed their entry, including the Olympic road race champion, Marianne Vos and her Rabo Liv team as well as the Wiggle Honda team of British Olympians Laura Trott, Joanna Rowsell and Dani King.

On the day the world’s best visit Bedford, there will also be an opportunity for budding young cyclists, amateur enthusiasts or just curious spectators to find out more about cycling.

Between 11am and 4pm Sustrans are organising a market for organisations that represent cycling in Bedford on St Paul’s Square.During the day you will be able to have a go at a wide range of activities to encourage you to get on your bike and live a fit and healthy life.

Inspiring the next generation

Selected school students will be given the opportunity to have a go at cycling on the streets of Bedford on the morning of the race. Students will be invited to try out elite level road bikes and find new fun ways of keeping fit and active.

Sixth form and college students can also win the chance to meet and interview the stars of the race in the post stage media conference. This prize is open to one lucky Bedford Borough based sixth form or College student. Finally, school students can be inspired by the world’s best cyclists and line the route on race day.

Supporting the professional women riders there will also be a town centre lap race featuring the country’s top riders. Further details on this will be announced in due course.

For more information on The Women’s Tour, visit www.womenstour.co.uk