After five days of racing, Brendan Gallagher looks back on the inaugural edition of the Friends Life Women’s Tour to assess its success.

After five days of racing, Brendan Gallagher looks back on the inaugural edition of the Friends Life Women’s Tour to assess its success.

SPORTING success is not always about times and distances or points and goals. My way of quantifying the staggering triumph that was the 2014 Friends Life Women’s Tour is simply to say that by about Friday morning it felt as if the race had been around for ever. On an extraordinarily busy week for cycling – the Giro, Four Days of Dunkirk and the Tour of California  it instantly felt as if the race belonged.  A high quality bike race that demanded your attention from start to finish.

The racing was very good indeed, the media coverage extensive, the crowds were massive and extremely supportive and even the British weather was comfortingly unpredictable and sporting. Everything slotted in perfectly, that moment you place the last couple of pieces into a huge jigsaw that has been frustrating the hell out of you for way too long.

Right from the off, ie arriving at Oundle soon after 8am on Wednesday and wandering into a coffee shop full of peda lheads, the Friend Life Women’s Tour felt reassuringly familiar which was the strangest thing as we hadn’t yet seen a pedal pushed in anger.

It ticked all the boxes, which is exactly the point really. It was finally filling a hole in the calendar that anybody with any feeling for cycling will have recognised had been left gaping for way too long.

The fact is a well-run international stage race for the world's top women should never be an ‘exceptional’ once in a blue moon event. It should be a regular date on the British calendar, considered purely on its merits, taking it place alongside various male races.

As Baronness Tanni Grey-Thompson was saying in Oundle, where she dropped the flag and declared the race open, that to the true sports fan it matters not whether women or men are competing. A good bike race is a good bike race; a superb forehand winner is a superb forehand winner. Within a matter of hours after the novelty of the Depart, the Friends Life Women’s Tour moved into that territory. A cracking bike race and spectacle. End of story. 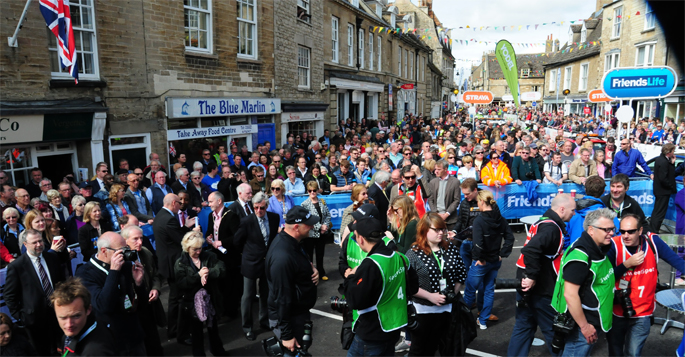 Baronnes Tanni incidentally was close to tears for much of that first morning in sunny Oundle, describing it as one of the most emotional days of her very considerable sporting career which after she retired from Paralympic sport has included helping to organise the 2012 Olympics and campaigning in the House of Commons for a fairer deal and more opportunities for British sports women.

The Friends Life Women’s Tour is here to stay, in fact the borough councils are clamouring to be involved and Friends Life can reflect on a genuine sponsorship coup because this event will only get bigger. The number of stages will increase and possibly the distance the rider can cover each day.  Like the men's event it will never be able to cover all of Britain in a seven or eight days but its geographical scope will grow.  No start up event will ever be without teething problems and the sheer size of its popularity provided one or two crowd control issues this time around but show me a major bike race that doesn't continually address that challenge.

Race Director Mick Bennett, who always likes to shake things up a little, boldly state at the eve of Tour press conference at Kettering that the Friends Life Women’s Tour would become the biggest womens road race in the world inside three years. The gathered media guffawed a little but Bennett was on the money.  Just as Sir Dave Brailsford's predication of a British Tour de France winner inside five years came true, so will Bennett's pledge prove to be correct.  The momentum and template are there. 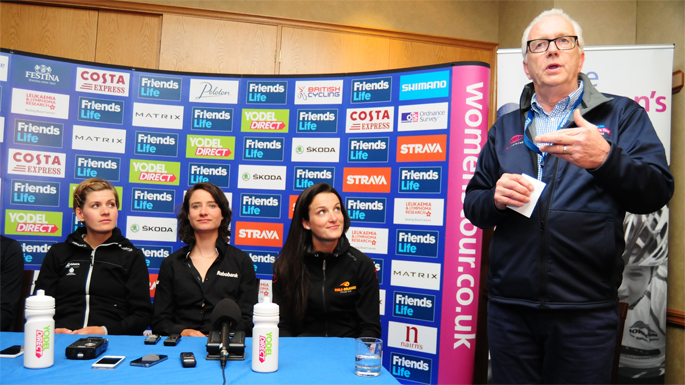 Certainly race winner Marianne Vos – whose presence and world class racing was illuminated the week – has no doubts: “This is already one of the biggest women’s races in the world,” said the incredible Dutch rider after clinching the GC at Bury St Edmunds with her third stage win of the week. “It's certainly the biggest one for attention already. The crowds were amazing every day, even in the weather. The British fans have embraced cycling and it is close to their hearts now. They come out in every weather and that is great when you are racing hard and going to the limit.

“We saw it at the 2012 Olympics which were amazing and events like that have made a huge difference for our sport. Here we are back in 2014 at this great race which has provided such a good platform for us to showcase the women’s sport and show the beauty of women’s cycling to the world.”

The highlights? Well for me, the sheer buzz at Oundle on Wednesday morning and the look on the faces of athletes who finally felt they were being appreciated was something to behold;  Vos in full cry  is incredible while Lizzie Armitstead trying to nick a second off her at the YodelDirect intermediate sprint every day was always good value; the sight of young Brits Lucy Garner and Hannah Barnes mixing it on a daily basis with the world's best; a defiant Laura Trott making it to the start line on Saturday morning after he crash the day before; an emotional Emma Trott announcing her retirement and everywhere appreciative crowds voting with their feet. The best moment of all though was a triumphant fist pump from Guy Elliott shortly after the finish of Stage Two in Bedford after a horrible rainy day's run from Hinckley that would have tested the loyalty of even diehard cycling fans. “Did you see the crowds, did you see the crowds” shouted the man whose idea and passion this race was and the man who didn't rest until, along with SweetSpot, he made it happen.

The British sporting public had voted with their feet, More women's road racing please. Elliott’s cry of delight was more than justified.