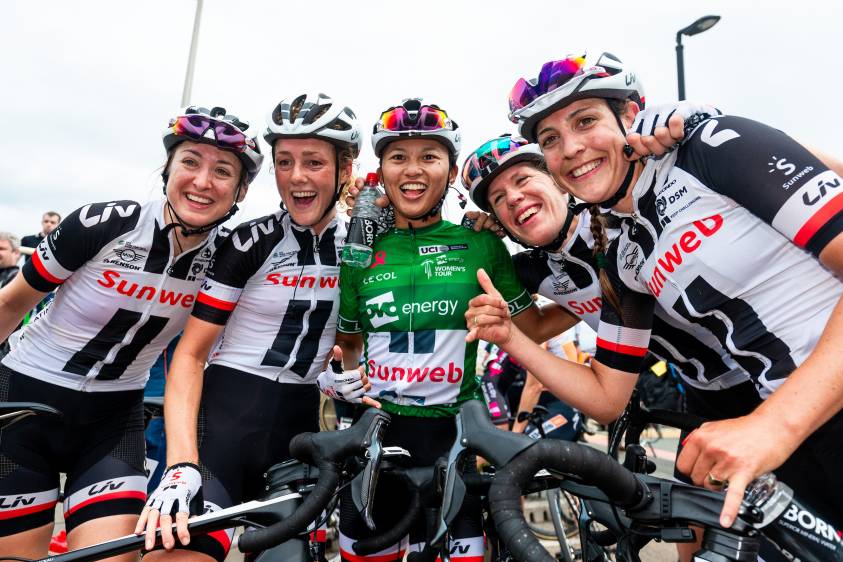 Defending OVO Energy Women’s Tour champion Coryn Rivera will lead Team Sunweb at next week’s race, it has been confirmed.

Defending OVO Energy Women’s Tour champion Coryn Rivera will lead Team Sunweb at next week’s race, it has been confirmed.

The current USA road race national champion – the race’s sole non-European victory to date – will lead a six strong line up that also includes former Best Young Rider in the Tour, Floortje Mackaij, when the event begins in Suffolk on Monday 10 June.

Rivera, a former winner of the Prudential RideLondon Classique, won stage two of the 2018 OVO Energy Women’s Tour in Daventry to take the race lead, which she kept to the overall finish on the North Wales coast at Colwyn Bay.

Riding alongside her will be Mackaij, who was Best Young Rider in the event in 2016 and earlier this season took an impressive second place in the Liege Bastogne Liege classic.

German national champion Lianne Lippert will make her OVO Energy Women’s Tour debut while Leah Kirchmann is in line to start her sixth Tour, having finished all previous five editions.

Kirchmann is one of just six riders to have ridden every stage of every OVO Energy Women’s Tour to date since SweetSpot launched the event in 2014.

The final two places are completed by Norway’s Susanne Andersen and Dutch rider Julia Soek, the latter of whom was part of Rivera’s winning team in 2018.

Reaction to the news

“We arrive at the Women’s Tour with a lot of confidence after a good team performance in Thüringen.

“Unlike last year where the race was decided by bonus seconds between Coryn and Vos, this year there are two really tough GC days which should see bigger gaps. We expect the first three stages to end in sprints and the team will work to set up Coryn for those.

“While the following two days are the big GC stages and we should see some exciting racing.

“We’ll go into those days with a more open approach, with Liane and Leah as leaders. Coryn and Floortje will also look to get in the breakaways for the team, riding aggressively at the head of the race.”

Breast Cancer Care are the official charity partner of the race for a third year, and we’re asking Team Sunweb fans to show their support by donating to this incredible cause.

Donate now to help Breast Cancer Care and Breast Cancer Now to continue to carry out world-class research, as well as giving the team the extra boost they need to push harder at every stage of the race!

Stay tuned to the OVO Energy Women’s Tour website and social media this weekend to hear from Coryn Rivera who will be among the riders at the pre-race media opportunity on Sunday 9 June.