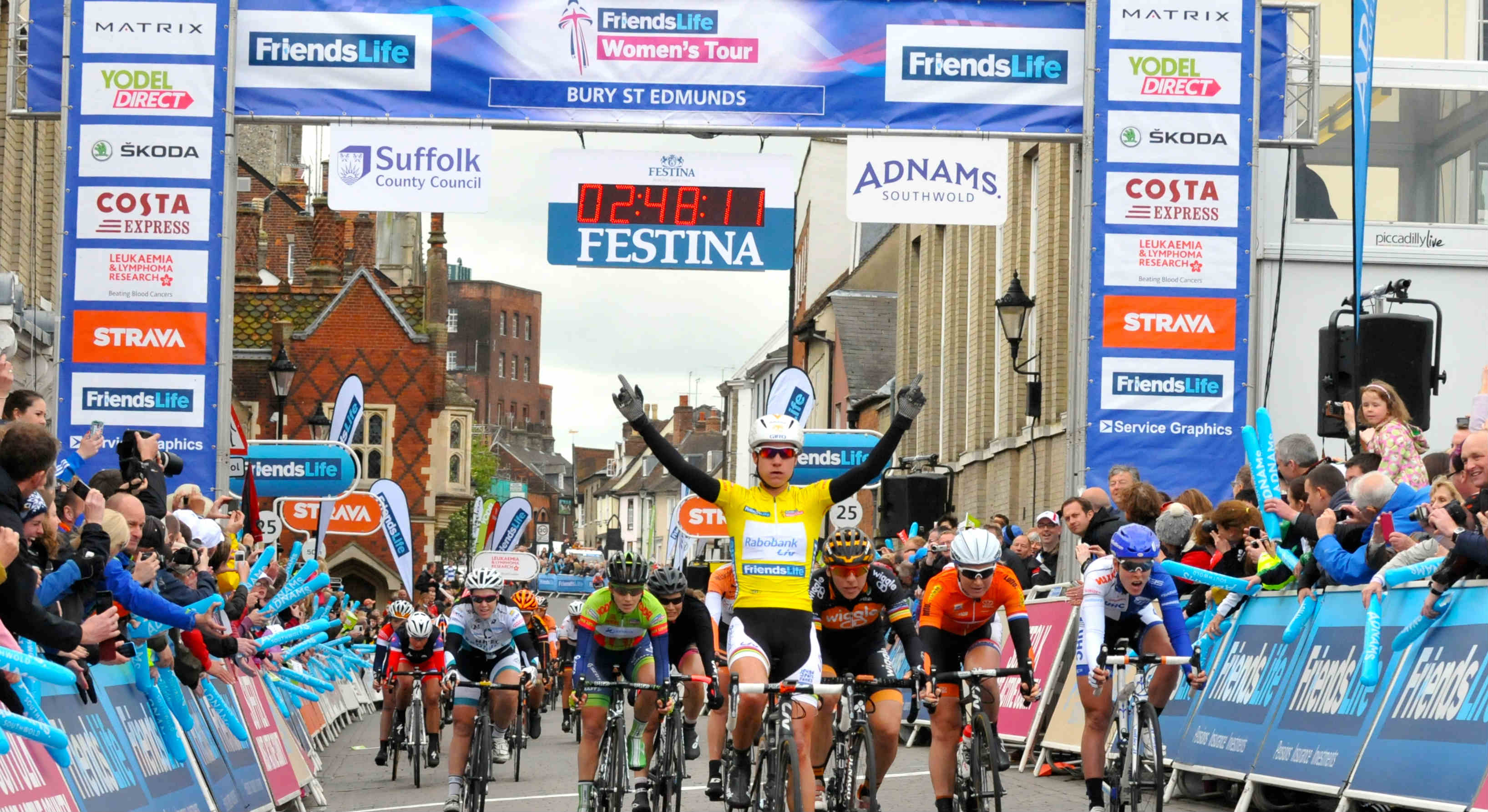 The opening stage will take 100 of the world’s top female cyclists across the county, in a stage entirely within Suffolk, finishing in the coastal town of Aldeburgh, on Wednesday 17 June.

The stage will start from Angel Hill in the heart of Bury St Edmunds, where Marianne Vos won the final stage and the overall Friends Life Yellow Jersey in May 2014, with further details of the Stage One route to be announced in the coming weeks.

Also taking place in Bury St Edmunds will be a free-to-attend team presentation event, the evening before the opening stage, on Tuesday 16 June, giving fans the chance to see the world’s top teams and riders who will be taking part in the Friends Life Women’s Tour.

“The 2014 Friends Life Women’s Tour was one of last year’s highlights, and I am delighted that this world class event will be returning to Bury St Edmunds. Watching athletes at the top of their sport is exhilarating and the event has a terrific atmosphere. I hope it is also inspirational and many more women will be persuaded of the benefits of getting on their bikes and enjoying our very special part of Suffolk.”

“It is extremely exciting that the Friends Life Women’s Tour is returning to Suffolk and starting where last year’s climaxed. Last year Bury St Edmunds was filled with thousands of spectators eagerly awaiting the race finish and we expect this year’s event to be just as spectacular.

“The announcement comes at an exciting time, as Sport England launch ‘This Girl Can’, a campaign celebrating active women. The campaign encourages women whatever their ability, size or previous experience that sport can be a fun and enjoyable part of their lives. We hope the return of the Friends Life Women’s Tour will help inspire more women across the county to take up cycling or some form of sport and physical activity, assisting us in our bid to become the most active county in England.”

“Suffolk Coastal is delighted to be able to continue to support the Friends Life Women’s Tour. This allows us to give a boost to the beautiful seaside town of Aldeburgh, bringing in extra tourism and raising the profile of the town and the entire District, while also encouraging people to have healthier lifestyles.  I am sure the people of Aldeburgh, and those along the entire route, will turn out to support this exceptional event.”

The opening stage will be supported by Adnams, who are now a well-established local partner for both the Friends Life Women’s Tour when it visits Suffolk.

“Adnams is delighted to be involved in the Friends Life Women’s Tour once again. Last year’s inaugural event was a terrific success and proved the popularity of cycling, for women and men, elite and recreational, continues to grow. To see so many of the world’s top female cyclists whizzing along our county’s roads was a real inspiration to us all. The Friends Life Women’s Tour is an event which Adnams is proud to support and excited to see return.”

In 2014 in addition to the final stage finish in Bury St Edmunds, Suffolk Coastal also hosted the Start of Stage Three, also won by Marianne Vos, which started in Felixstowe.

“After the great success of last year’s race it is fitting that we will be starting off the second edition of the Friends Life Women’s Tour from where the 2014 Tour finished.  Last year’s race surpassed all of our expectations and thanks to the support of Suffolk County Council, Bury St Edmunds and Suffolk Coastal, we know this year’s will start off on a similarly high-level.”