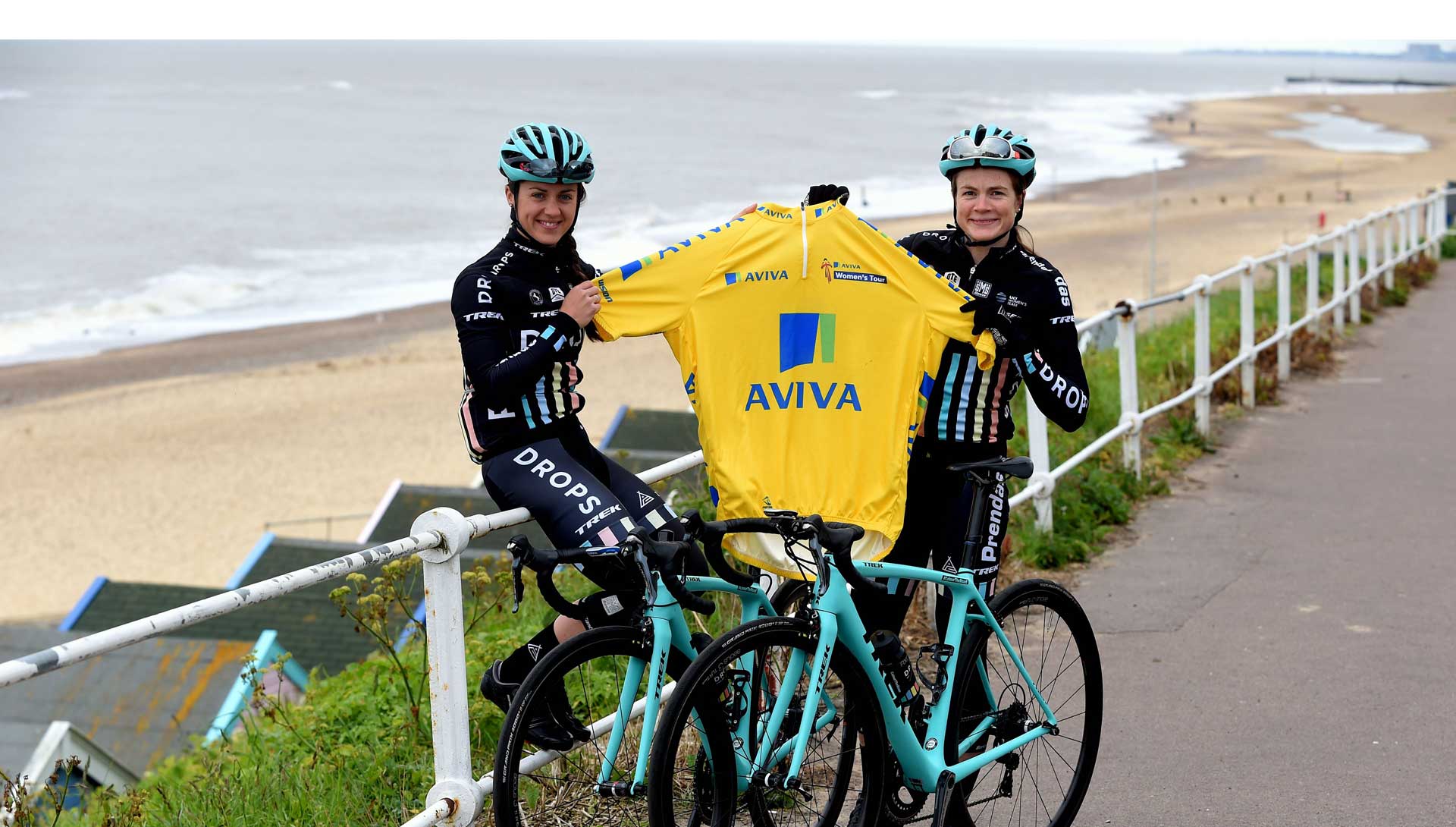 Suffolk County Council and Active Norfolk welcomed members of the media today to experience part of the route planned for Stage One of the forthcoming Aviva Women’s Tour that returns to Suffolk for the third time this summer. The media ride covered a 10-mile section from the Swan Hotel in Southwold to the Angel Hotel in Halesworth, including the opening Strava Queen of the Mountains climb.

Suffolk County Council and Active Norfolk welcomed members of the media today to experience part of the route planned for Stage One of the forthcoming Aviva Women’s Tour that returns to Suffolk for the third time this summer. The media ride covered a 10-mile section from the Swan Hotel in Southwold to the Angel Hotel in Halesworth, including the opening Strava Queen of the Mountains climb.

The ride-along featured professional riders including Laura Massey and Rebecca Durrell from the Drops Cycling Team  as they return to the UK from competing in the UCI Women’s World Tour race in California. The pair recently finished second and third behind teammate Alice Barnes in the Lincoln Grand Prix. In 2016, Drops announced the launch of their own UCI registered  Women’s Cycling Team, with the aspiration to be the most professional women’s amateur team in the world, providing a viable alternative to British Cycling’s Academy system.

Looking forward towards the summer’s stage, Councillor Tony Goldson, Suffolk County Council’s Cabinet Member for Health, said: “It’s great to be able to welcome the Women’s Tour back to Suffolk for a third time. We are growing quite an association with the Tour and we are proud to host the opening stage in the beautiful Suffolk countryside. Building on the success of Suffolk’s Year of Cycling in 2015 I know that this event will be well supported by the communities along the stage route and the event provides our communities with a welcome boost for the county’s tourism and business sector.

“Seeing the professional cyclists at such close quarters is always an inspiring sight and I would encourage everyone to embrace the joy of cycling as part of our drive towards becoming England’s most active county.”

Suffolk is proud to host the official start of the Tour when it begins in Southwold on Wednesday 15 June. The route takes in the picturesque Suffolk coast and countryside as it winds its way to Norwich via Halesworth and Lowestoft. The stage is 132km. Commenting on the stage, Aviva Women’s Tour Race Director Mick Bennett said; “We would like to thank Suffolk County Council and Adnams for their support of the Aviva Women’s Tour as we prepare for what will undoubtedly be the best edition of the race yet.  We have a fantastic line-up of teams and a challenging route through some of the most picturesque locations in England.  That we start from the beautiful location of Southwold on the Suffolk Coast is entirely fitting.”

14 of the world’s top 17 teams will be on the start line in Southwold as the stage in the Aviva Women's Tour, is also the first European stage race of the 2016 UCI Women's World Tour.

Marketing Director for Adnams, Emma Hilbert said: “We are delighted to welcome the Women’s Tour to our home in Southwold, Adnams has supported the Women’s Tour and Tour of Britain for a number of years and is proud to work with Suffolk County Council and Active Norfolk to bring this prestigious event to our region.  I’m sure that there will be a terrific turn out from Southwold residents and visitors as the world’s top female cyclists set out from Southwold Pier, through the Adnams Brewery yard onto Southwold High Street. Cycling continues to gain in popularity, as a sport and as a leisure pastime and plays an important part in the tourism strategy for our region.”

Ben Jones, Director of Active Norfolk said: “We are really excited to be welcoming the Aviva Women’s Tour to Norfolk for the first time this year.

“Increasing participation of women and girls in sport and physical activity is something that is central to our new strategy, as well as being a national priority identified in Sport England’s strategy launched last week. High profile events like the Women’s Tour are a fantastic way to raise the profile of sport and inspire more women and girls to get on their bikes and get active.”

Further information on the Tour and details of Stage One between Southwold and Norwich, including an ETA and interactive map, can be found here.