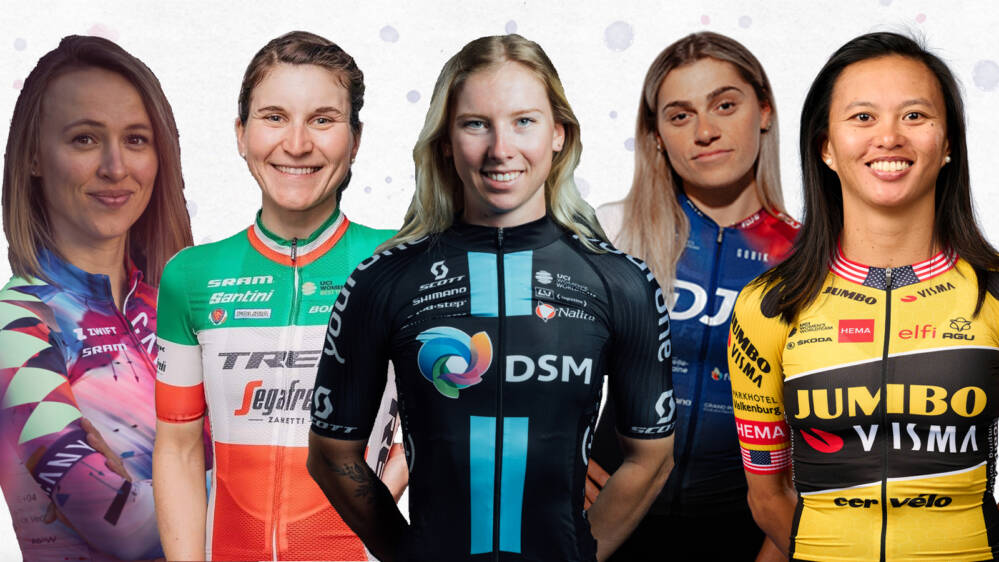 Former champions Kasia Niewiadoma and Coryn Labecki will be joined by past stage winners Lorena Wiebes, Christine Majerus and Chloe Hosking on the start line of this year’s Women’s Tour.

Former champions Kasia Niewiadoma and Coryn Labecki will be joined by past stage winners Lorena Wiebes, Christine Majerus and Chloe Hosking on the start line of this year’s Women’s Tour.

Britain’s leading women’s stage race has once again attracted a world-class field for its eighth edition, which begins in Colchester next Monday (6 June).

Niewiadoma, who triumphed in 2017 and finished second two years later, will start off among the favourites for this year’s title. The Polish rider, who competes for the Canyon//SRAM Racing team, is also two-time Women’s Tour stage winner. One of the best climbers in the peloton, Niewiadoma will be one to watch on stage five, which finishes atop the Black Mountain in Carmarthenshire.

Labecki succeeded Niewiadoma as overall champion and will lead a Team Jumbo – Visma squad that also features British star Anna Henderson. A former American national champion, the 29-year-old has previously won the Trofeo Alfredo Binda and Tour of Flanders, as well as stage in the Giro d’Italia Internazionale Femminile.

Returning to compete in her second Women’s Tour is Team DSM’s Lorena Wiebes. The Dutch sprinter claimed back-to-back victories in last year’s race and will be among the favourites for the opening day victory in Bury St Edmunds. Wiebes has already won four races in 2022, including the prestigious Ronde van Drenthe one-day race in her native country in March, and a clean sweep at last weekend’s RideLondon.

Hosking was one of the most consistent riders in last year’s race, finishing second in Banbury, third in both Southend and Felixstowe, and fourth in Clacton. A stage winner in the race five years ago in Royal Leamington Spa, Hosking (Trek – Segafredo) is also the reigning Commonwealth Games road race champion.

Thirteen of the 14 UCI Women’s WorldTour squads will compete in this year’s race as the Women’s Tour gets set for its joint largest field ever: 102 riders across 17 teams.

The race will conclude in Oxfordshire on Saturday 11 June with a stage between picturesque Chipping Norton in the Cotswolds and the heart of historic Oxford.