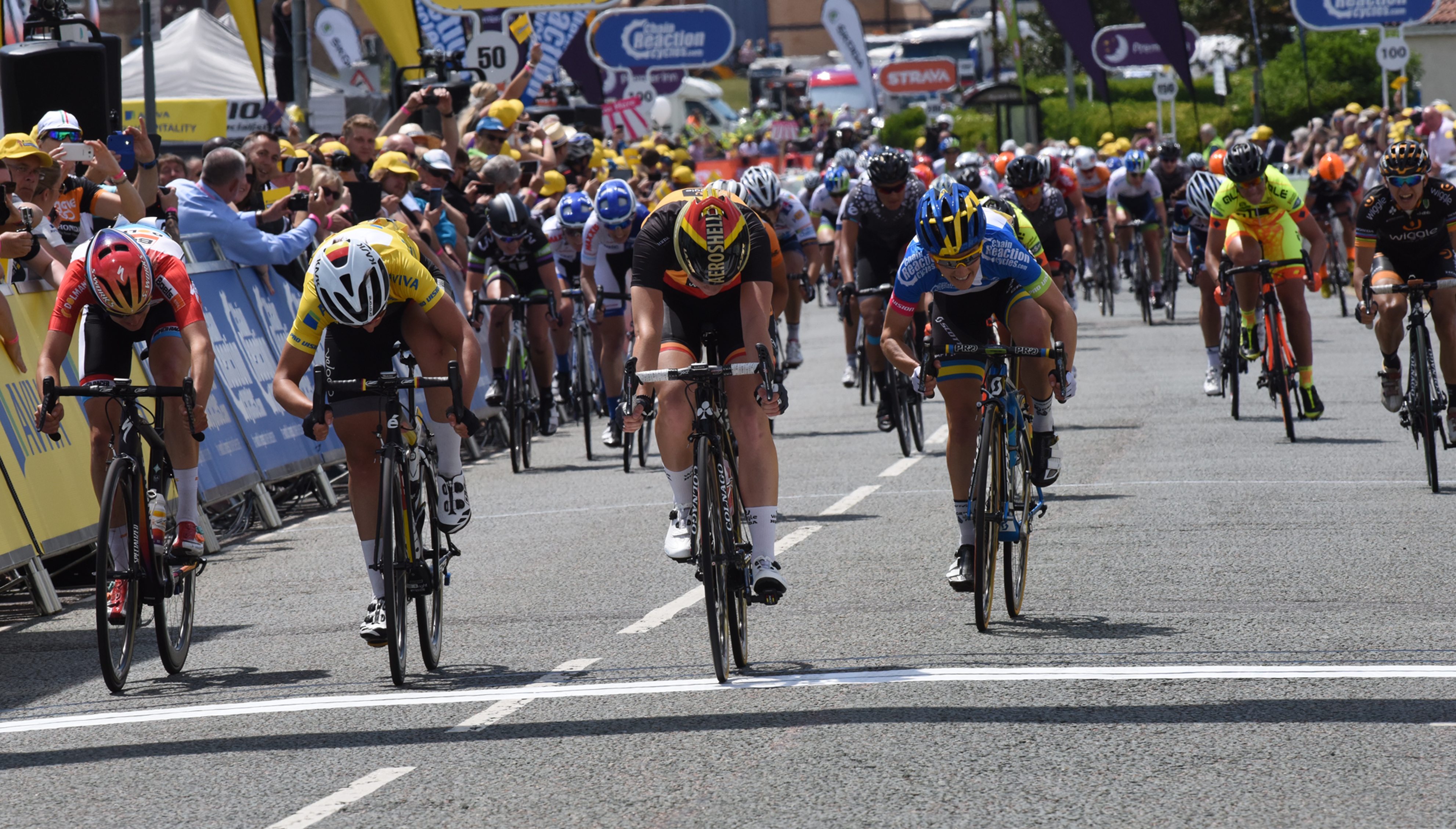 Jolien d’Hoore sprinted to victory in Clacton to move within one second of the race leader, Lisa Brennauer, as the fancied general classification riders began to flex their muscles.

Jolien d’Hoore sprinted to victory in Clacton to move within one second of the race leader, Lisa Brennauer, as the fancied general classification riders began to flex their muscles.

The reigning Belgian national road race champion of Wiggle Honda showing her liking for tough uphill sprints with a fine win on Marine Parade in Clacton.

With the peloton catching the break four kilometres from the finish in Clacton, the multi-talented d'Hoore, a former World Junior Champion on the road, positioned herself perfectly coming up the long drag into the Essex seaside resort to win by a wheel to record her latest win in an increasingly impressive season. “It was pretty close in the end,” admitted d'Hoore.“I went form the last corner but it was uphill and into the wind so I didn't know if I could make it. I was hoping GIorgia Bronzini was in my wheel, in fact the original plan was for me to lead her out but she wasn't there. She told me to go from the corner and she would try and stay in the wheel so I just gave everything until the finish.

“I feel good, I’m getting stronger but I also have a good team around me and that makes a difference. You can never win a race alone. I don’t know about GC but I did want to win a stage. I have that now and I can stay relaxed. Let’s see how I go.

“I had two weeks complete off the bike and then I had a five week training period which was pretty tough. It's a little bit of a risk when you rest like that but I was confident that my form was good. I am happy.”

D'Hoore has all sort of options ahead of her and objectively she must be a contender for the World Road Race Championship in Richmond, Virginia which she has seen and describes as a very up and down “Belgian style” course with a few comforting  cobbles for good measure.

But Rio 2016 is possibly and even bigger focus and in particular the Omnium on the track where she could yet prove the strongest rival to the triumvirate of Laura Trott,  Annette Edmondson and Sarah Hammer who have dominated the event in recent years. D'Hoore finished fifth at London 2012 but was an outstanding winner at the World Cup at the Lee Valley Velodrome last year.

“For Rio I am going 100% for the track and my road season next year will be short to plan for that,” insists d'Hoore. My goal is the Omnium for sure”

Meanwhile Brennauer, the World Time Trial champion, is revealing an unexpected talent for sprint finishes with her second runners up spot in two days confirming her in the Aviva Yellow Jersey that she wore today in place of the absent Armitstead, who, as she had announced the previous night, decided not to continue after her nasty crash after her stage win in Aldeburgh.

“It felt quite weird for me to be wearing the yellow jersey today. I feel really sorry for what happened to Lizzie yesterday, it’s never nice when somebody gets hurt in a crash

“I'm not really concentrating on my sprinting despite the two second places. I think perhaps I am just getting a better athlete. I'm not a pure sprinter and probably never will be but I can be fast especially when I get a nice lead out and the finishes on the last two days have suited me.

“It was pretty hectic today with a lot of teams trying to set their sprinters up, my team did a really great job setting me up around the last left hand corner when we hit the coast. The sprint opened up and I just did my best. I want to fight or this yellow jersey but the GC is close, so much can happen.”

Brennauer also retains her lead in the Chain Reactions Cycles Points competition, with second overall d’Hoore wearing that jersey for Friday’s stage in Nothamptonshire, while Melissa Hoskins of Orica AIS leads the Strava Queen of the Mountains competition having picked up points on both classified climbs.

You can find full results and standings after Stage Two of the Aviva Women's Tour here.

Highlights of Stage Two are on ITV4 at 8pm on Thursday 18 June, with a repeat at 11.05am on Friday morning.

Stage Three sees the race return to Oundle, the Grand Depart town for last year's inaugural Women’s Tour, which this year acts as the start for a demanding 139.2km run to Kettering through the Northamptonshire countryside. With the most demanding terrain so far and a stage length just 800m short of the maximum allowed by the UCI, this should be where the Aviva General Classification race kicks off in earnest, especially off the back of a long and hard ridden Stage Two in Suffolk and Essex.