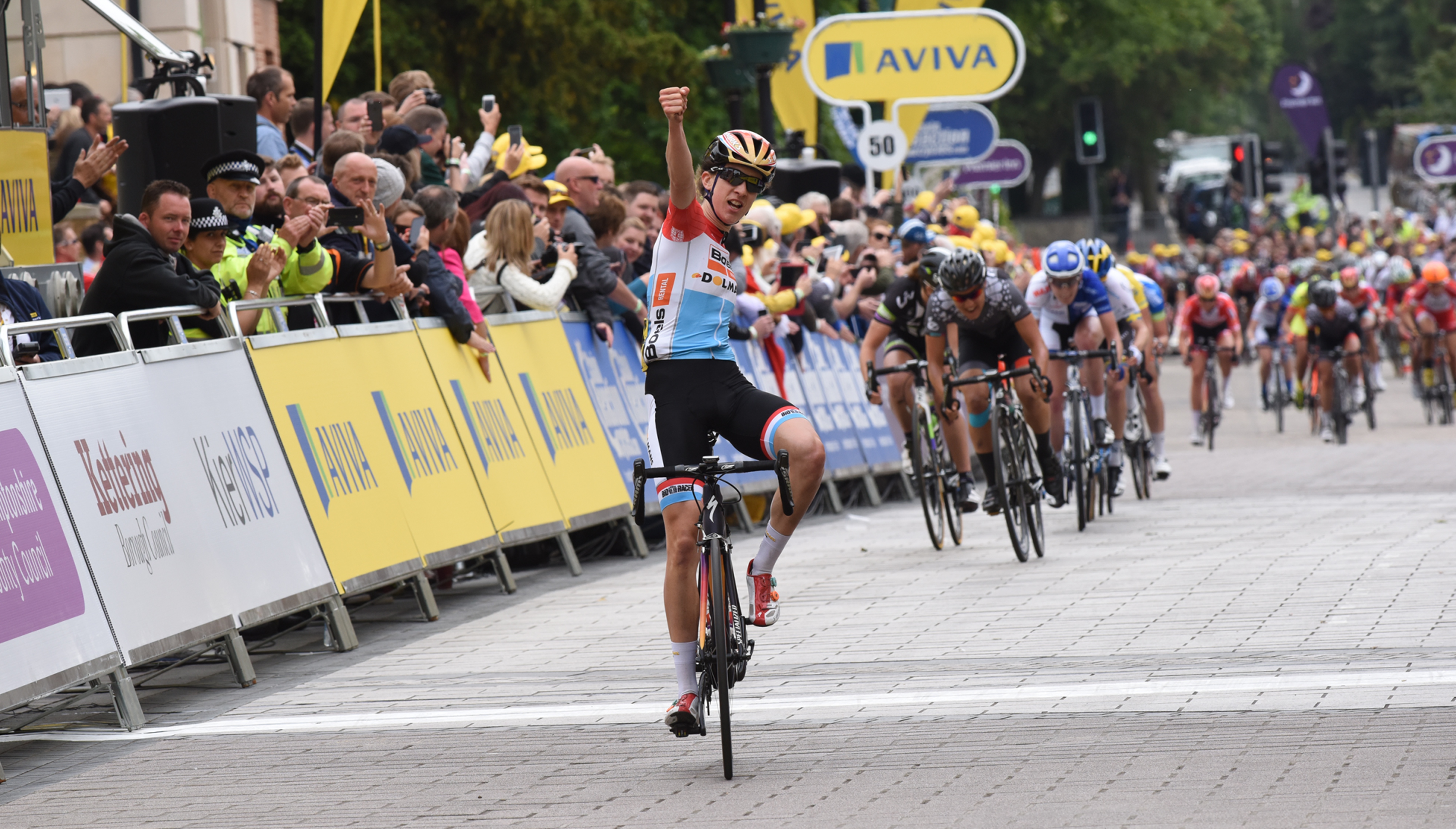 Luxembourg national champion Christine Majerus sprinted to victory in Kettering on Friday afternoon to take the lead of the Aviva Women’s Tour heading into the weekend’s final two stages.

Luxembourg national champion Christine Majerus sprinted to victory in Kettering on Friday afternoon to take the lead of the Aviva Women’s Tour heading into the weekend’s final two stages.

The Boels Dolmans rider rounded the final corner atop a stiff drag up to the finish line at the head of a peloton, heading home Barbara Guarischi and young British duo Lucy Garner and Hannah Barnes.
Majerus’ two second advantage on the Northamptonshire finish line moved her into the Aviva Yellow Jersey, four seconds ahead of overnight leader Lisa Brennauer. Garner’s strong ride also saw her head up the SweetSpot Best Young Riders competition and take the Premier Inn jersey for the top placed British rider thanks to her sixth place overall.

Lisa Brennauer held on to the Chain Reaction Cycles Points Jersey, having finished in the top six on every stage, while Melissa Hoskins keeps the lead, by four points over Elise Delzenne, in the Strava Queen of the Mountains classification.

Bigla Pro Cycling’s Sharon Laws won the YodelDirect Combativity Award for an attacking display that saw her only caught by the peloton on the outskirts of Kettering. Last year’s Strava Queen of the Mountains had bridged across to a two-rider break of Heather Fischer and Chloe McConville, but the trio’s lead was finally snuffed out with three kilometres to go.

Highlights of Stage Three are on ITV4 at 8pm on Friday 19 June, with a repeat at 11.10am on Saturday morning and also available via the the ITV Player for 30 days.

On Wednesday Majerus, normally a super-domestique in a star studded team, worked on behalf of stage winner Lizzie Armitstead before looking on in horror as her colleague crashed to ground after the finish. Armitstead was on the way to hospital by air ambulance as Majerus and the rest of the worried Boel Dolmans team accepted the yellow jersey on her behalf at a muted winners’ ceremony.

Later that night however Armitstead walked back into the team hotel after escaping serious injury and yesterday Majerus, enjoying the opportunity to ride as a protected rider, again showed her class with a brilliantly executed ride. The Luxembourg rider kept her nose out of the wind in the peloton all day and with her team moving her effortlessly through to the sharp end of the race when the break was caught four kilometres out from the finish and she really went to work. Racing into the final kilometre the key was a sharp ramp and sharp left hand corner at 200m out and she negotiated both in fine style

“It was a good day, exactly as we planned it and it’s always nice when that happens,” said a delighted Majerus afterwards. “I was so well protected by my team-mated that I couldn't not win! We had a close look at the finish in advance and that last chicane suited me because I am pretty good at cornering. When I got through the corner and saw the gap I realised this might be my day so I just went for it.

“The yellow jersey was a nice bonus. I definitely wanted to try and win the stage but it was only when I was sitting at the podium waiting for the presentation that I got told I was the yellow jersey as well.

Now 28 Majerus is a perennial winner of the Luxembourg National Time Trial championship eight times and the national road race for the last five years on the bounce.  She has also a six time national cyclo-cross champion and, unsurprisingly, was voted Luxembourg's Sports Woman of the Year in 2013 when she also recorded perhaps the best win of her career before today, taking the prestigious Sparkassen Giro.

“Normally I ride a lot for the other girls at Boels Dolmans and I know how cool and satisfying it is to see your teammate winning. We have a great mentality in the team with everyone racing for everyone.  That's why we have had such nice results this year. Today I was the leader and they did a lot of work for me I could not let that work go to waste. It was a huge motivation to really go for it and I took my chance.

“It is always difficult when you see a teammate crash so hard. I saw Lizzie crash in front of me and I was really scared for her. For four hours or so after the race we were all pretty depressed but then she came back to the hotel, the was great news. The atmosphere got better, she wanted us to keep racing and to keep fighting for the wins. Since then we have been trying to win for her. Today I could finally smile.”

In second place behind Majerus was Italy's Barbara Guarischi riding for Velocio SRAM while in third place, with one of the ride of the day, was Great Britain’s Lucy Garner with a battling display which took her to sixth place in GC. Garner, who rides for Liv Plantur, has been struggling a little with a knee injury this season and although she is now happy with her fitness and recovery she was disappointed not to feature in Thursday's stage into Clacton which she felt was an obvious sprint finish.

Conversely she was dubious at the start of today's tough 139.2km stage whether she had the legs but, in that relaxed mood and with little expectation, Garner suddenly rediscovered the confidence and form needed to make an impression at this level.

“I've had a tough couple of months but I've trained well and thought I had good form. Thursday was quite a disappointing result for me. I wanted it so badly but it didn’t work out for me. I didn’t think it was particularly a day for me. It was a very tough circuit constantly up and down but I was hoping I could make it to the finish as fresh as possible but I'm really pleased with the third.

“The team got me into the best possible position and the sprint started very early at the bottom of the drag all the way up to the finish. It was a very long and painful sprint. I was trying to catch second but also trying to hold off some other riders I could see in the corner of my eye. Hannah Barnes came fourth and it seems I’ve been battling with Hannah ever since I started cycling. It's great she went so well in her home county.

“La Course at the end of July will be the next big target for the team and myself after the Women’s Tour. After the Nationals next week I’ve got a big training block to prepare for it.”

Another prominent British rider on the day was Sharon Laws whose hard riding in the break earned her the YodelDirect Combativity award: “It was a long day but we had seen on Thursday that the break stood a chance and we wanted to get in one today so I took my chance,” says Laws.

“So I decided to try and bridge the gap when Chloe McConville and Heather Fischer went up the road. Once I got over to them it was good and we worked well together. It was a shame we could stay all the way.

“Out front though it is really possible to appreciate the crowds. When you are in the peloton you don’t notice them quite so much but today some people seemed to recognise me in the break and were shouting my name which never happens when I am racing in Europe.”

Saturday’s Stage Four, a 103.4km run between Waltham Cross and Stevenage has the look of another sprint but with the overall general classification race for the Aviva Yellow Jersey so close and bonus second up for grabs every second counts. Majerus is just three second ahead of Jolien D’hoore with Lisa Brennauer just one second further back in third place. Indeed the 20th place rider on GC, Majerus’ Boels Dolmans teammate Amelie Dideriksen, is still only 20 seconds behind the leader.