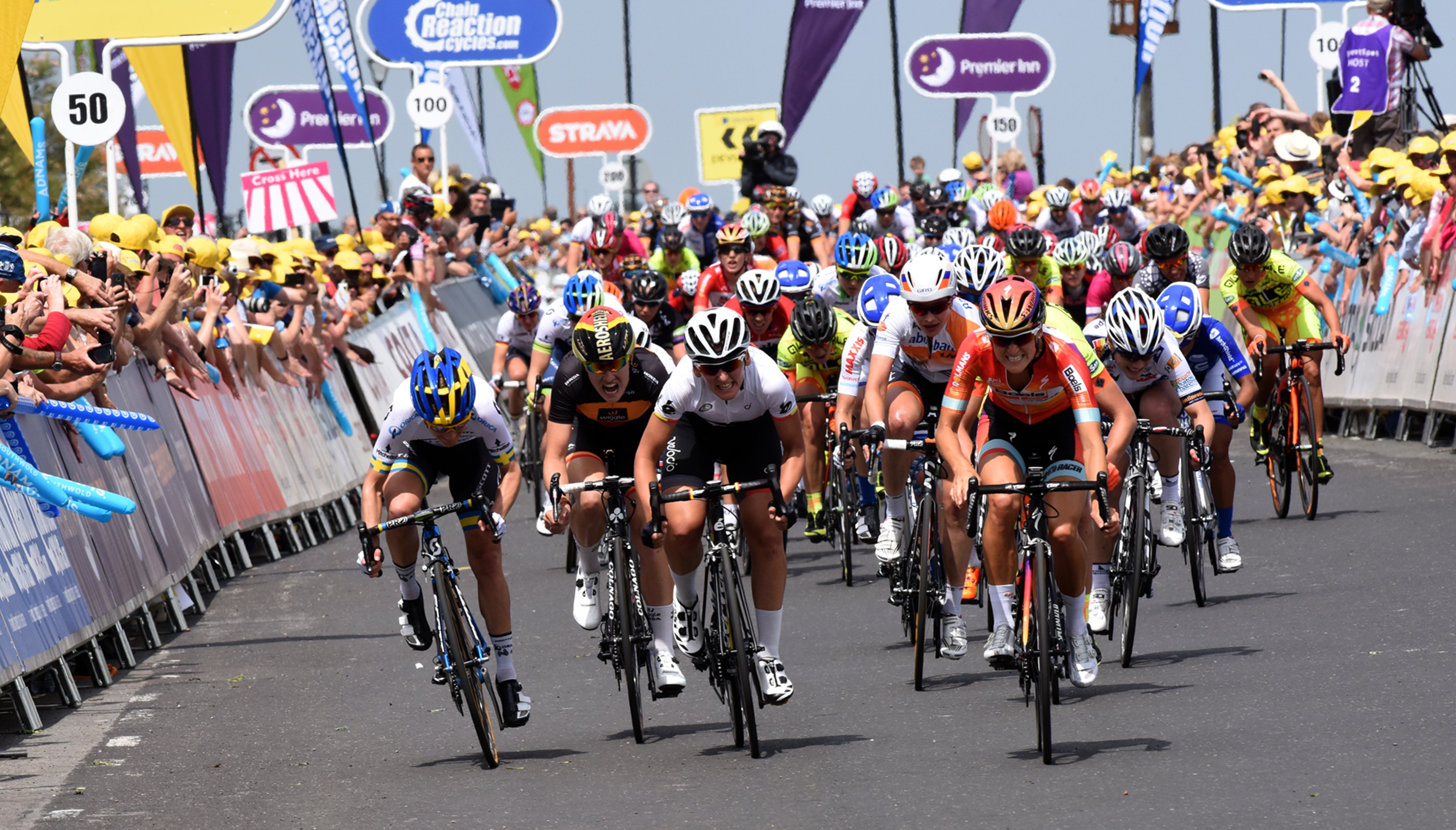 Lizzie Armitstead took the opening stage victory in the Aviva Women’s Tour, for a shortlived race lead as a post finish line crash sent her tumbling out of the race.

Lizzie Armitstead took the opening stage victory in the Aviva Women’s Tour, for a shortlived race lead as a post finish line crash sent her tumbling out of the race.

OLYMPIC Silver medallist Lizzie Armistead was discharged from a Norwich Hospital last night after recovering from a horrific looking crash at the end of Stage One of the Aviva Women’s Tour in Aldeburgh,  which resulted in an air ambulance being used to ferry her to hospital.

After a full examination and scan Armitstead walked out of the hospital unaided before re-joining her Boels Dolmans team at their hotel. Incredibly there was even talk night that the tough Yorkshirewoman might yet try and continue the race, however with one eye on the upcoming National Championships opted to withdraw from the race and will not start Stage Two.

Having just produced a withering burst of speed to win the stage Armitstead was celebrating one of her most impressive victories of recent seasons in a closely fought bunch finish when she veered left clipping the edge of a group of official photographers gathered at the side of the road beyond the finish line to take the traditional front on winners' shot.

Going through the line at something like 50kph Armitstead shouted with delight and raised her arms in triumph and kept them raised in celebration before bringing them down just before the moment of collision with the group monitored by Race Director Mick Bennett.

Armitstead, 26, fell heavily but with medics immediately on the scene was treated before being stretchered away to await the arrival of an air ambulance, with initial fears of broken bones fortunately proving to be unfounded.

The apparent serious of her had naturally take the gloss off a win and a good opening day's racing at the second Aviva Women’s Tour but the sigh of relief that greeted the news of her discharge could be heard around most of East Anglia and all the sixteen teams participating. Until its hotly contested sprint finish the 113km stage between Bury St Edmunds and Aldeburgh had been fairly uneventful although the race had been ridden at a fair pace as riders strained at the leash at the start of the five day stage race. With the weather set fair there were big crowds along the route and a large gathering at the finish on  Aldeburgh seafront.

Proceedings were animated midway through when a quality six rider break finally got away. Great Britain Team Pursuiter Kaite Archibald, who had suffered a tumble earlier in the race, and Elinor Barker, who rode strongly while in the group with Marta Tagliaferro, Heather Fischer of the USA teamand two riders from the UnitedHealthcare team – Katie Hall and Coryn Rivera.

Hall and Rivera had the luxury of knowing that if the break didn't stick their team sprinter Hannah Barnes in the peloton was back in the peloton.

Fischer crashed out but the break, 50-seconds to the good, then profited from a railway barrier coming down just outside Melton. They made it through safely but the peloton was delayed and in no time the lead had gone out to two minutes before the bunch started to ride hard again to close down the danger

With the race heading into a headwind the days of the break were numbered turned south into Aldeburgh along the coast and in the end Armistead outkicked all the specialist sprinters to take the stage before her nasty crash.

In Armitstead's absence the Boel Dolmans cycling team were invited onto the podium to accept the stage award and jerseys Lizzie had garnered. In second place was Germany's World Time Trial champion Lisa Brennauer who rides for the Velocio SRAM team with Italy's Tagliaferro in third place.  Emma Johansson of Orica AIS, another major GC contender, was in fourth place and will now where the Chain Reaction Cycles Points jersey with the absence of Armitstead giving Brennauer the race lead.

Earlier in the day Katie Hall had accumulated enough points to take the lead in the Strava Queen of the Mountains competition. Coryn Rivera, who finished in 11th place, is the first leader of the SweetSpot Young Rider's jersey, Archibald the YodelDirect Combativity Award and Barker took the Premier Inn jersey for leading British rider following Armitsteads withdrawal.

To view the Stage One results of Aviva Women's Tour, please click here.

The action continues on Thursday with Stage Two, a 138km run from Braintree to Clacton-Sea, which could finish in another bunch sprint although strong side winds might have to be factored into the equations.