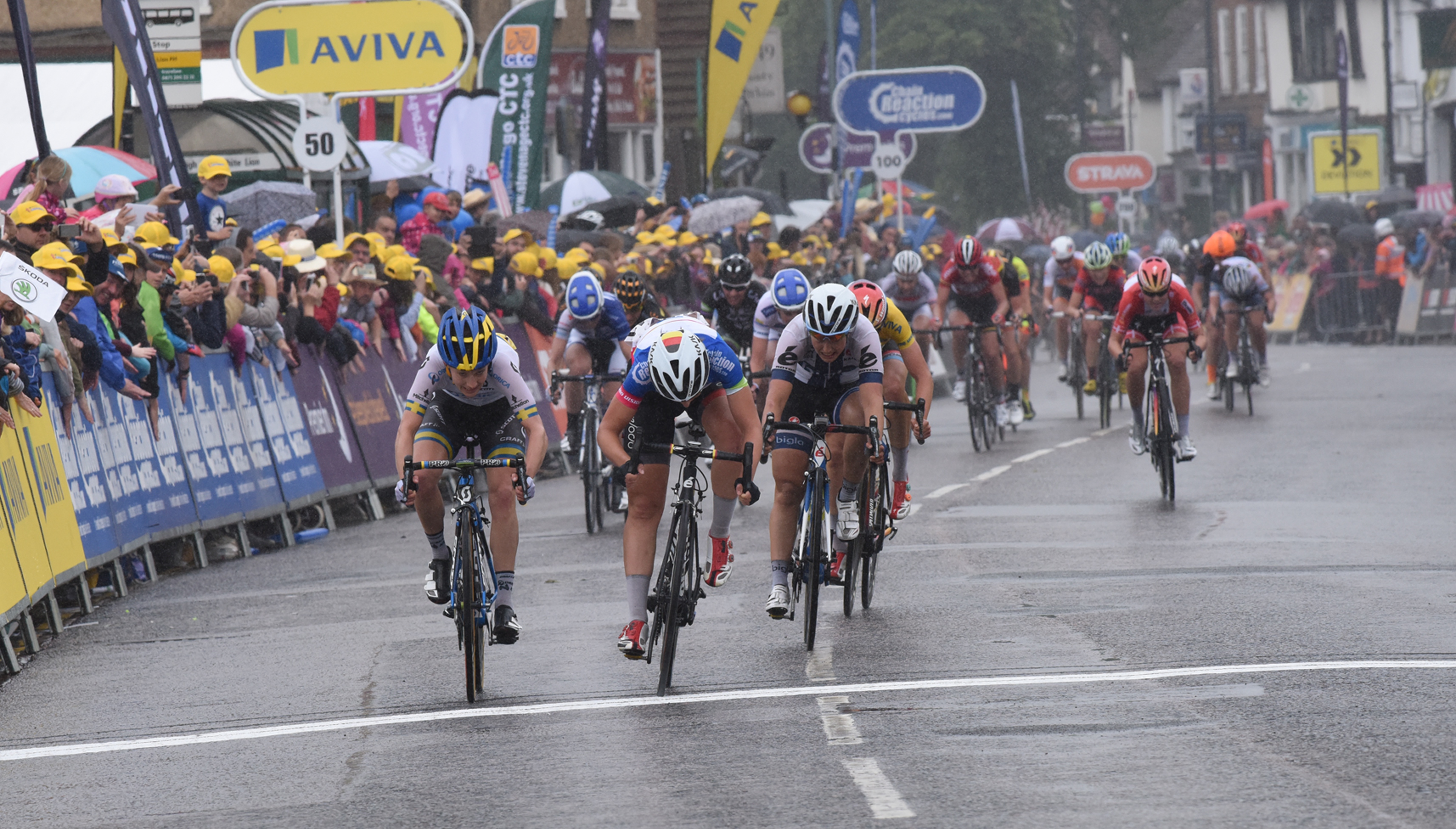 Lisa Brennauer sprinted back into the Aviva Yellow Jersey at the end of Stage Four of the Aviva Women’s Tour in Stevenage, as the peloton swept up a two-rider breakaway inside the final kilometre.

Lisa Brennauer sprinted back into the Aviva Yellow Jersey at the end of Stage Four of the Aviva Women’s Tour in Stevenage, as the peloton swept up a two-rider breakaway inside the final kilometre.

The World Time Trial Champion now holds a nine second lead in the race into tomorrow' decisive stage between Marlow and Hemel Hempstead, which offers up probably the most demanding terrain of the week and possibility for breakaway success in what has been a furiously ridden race.

The German rider from the Velocio SRAM team had led the chase into Stevenage of a very high quality break in the last quarter of the race featuring European Under-23 Road Race champion Sabrina Stultiens and the dangerous Italian Elisa Longo Borghini, who won the Ronde Van Vlaanderen World Cup round earlier this year with a spectacular 33km break.

That duo were much too dangerous to allow any significant leeway when they went hard with 25km to go and Brennauer and her team, as well as Boels Dolmans riding for overnight race leader Christine Majerus immediately moved to the front to control matters.

The break’s advantage reached almost one minute with just under 20-kilometres to go, but were steadily pegged back as the peloton rode with controlled pace in wet and slippery conditions.  As they turned to take the flame route at one kilometre to go the game was up and the sprint teams started to organise themselves but Brennauer has shown a rare turn of speed this week and powered through in trademark fashion ahead of Emma Johansson and Finnish National Champion Lotta Lepistö, with the Aviva Yellow Jersey of Majerus in fourth. “When the rain came I knew it would be tricky but I went around the final corners safely and chose a good wheel in Emma Johansson and came off from there,” said Brennauer. “The chase was difficult because of the undulating course and the quality of the riders up the road and I wasn't quite sure we would see them again before the finish.

“It’s going to be an exciting day and it is so close that there are seconds on the road that everybody will fight for before the final finish but me and my team are going to do our best to bring this jersey home now that we have it back. We raced very well today as a team and that will give us confidence for the final day. Our morale is very good. We have had a rider on the podium of every stage. The spirit is good and that is a very good way to start the final stage.”

Britain's Hannah Barnes, finishing the Aviva Women’s Tour strongly, rode well for her second consecutive top five place on the day to move up to fifth place overall, taking over from Lucy Garner as both the Premier Inn Best British Rider and SweetSpot Best Young Rider (Under-23). “It was a crazy finish, very technical in the last 10km and then it started raining on top of that,” said Barnes. “We drove the last 12km of the finish on the Friday night going to our hotel and you could see difficult it was going to be

“I knew there would be splits and time gaps at the finish so I tried to stay at the front. It all split on the last KOM and about 30 of us went up the road then the break went. The last 10km were very narrow and two riders were away but with the rain nobody particularly wanted to take up the chase and then it was far from a straight finish.

“I wasn't really happy with my form when I arrived back from the USA last week, it didn't feel there, but I do usually go better towards the end of a stage race and that is what has happened this week. For me it’s more about confidence more than anything. If I go into a race confident I will perform and the last three days that confidence has returned and I’ve been pretty consistent.”

Barnes has been largely based in the USA for the first half of the season but after this Aviva Women’s Tour she is planning a big training block in Girona before returning to the States where she is targeting the Tour of Utah and the Tour of Colorado, races in which she hopes to make a strong case for Great Britain selection at the World Championships at Richmond, Virginia in September.

Despite the efforts of Brennauer’s Velocio SRAM teammate Elise Delzenne, Orica AIS rider Melissa Hoskins continues to lead the Strava Queen of the Mountains jersey, but by just two points, and with the GC ambitions of her teammate Johansson the priority.

“I would probably be the last name you would expect to see leading the Queen of the Mountains. It just sort of happened. The first day as a team if you are near the mark when you come to the first QoM you go for it, take the points. You can get in a jersey and that is always great o this kind of tour.

“I ended up taking some points on the first QoM and then on the second day I thought I'd have a crack and see if I can get the jersey which I did. And what started as a bit of a joke and a bit of a play out on the road turned into something a little bit more serious and I started becoming attached to the polka dot! “Tomorrow's stage sounds a bit horrific, I’ve got my work cut out, but at the end of the day we are here to help Emma in the GC so my 100% commitment will be towards here. And all this week in between the QoMs my priority has been getting her in to the sprint. We are here for a bigger picture and that is Emma and the yellow jersey.

“The stage is going to blow apart, there is no question about that. There is going to be some big time gaps. Emma's got the form and there are a few girls behind her looking to get away on a break. It’s going to be a very aggressive race and it will be interesting to see how some of the sprinters handle the hills. Emma is climbing well, she’s always on the mark and there’s no question she can win it.”

Brennauer, who also holds the Chain Reaction Cycles Points Jersey, enjoys a nine-second leader over Majerus, with Stage Two winner Jolien D’hoore just a further second back.  In total all of the top fourteen remain within 30-seconds of the Aviva Yellow Jersey going into the final stage from Marlow to Hemel Hempstead, a 102.6km leg from the banks of the River Thames through the Chiltern Hills.

Highlights of Stage Four are on ITV4 at 8pm on Saturday 20 June with a repeat at 11.10am on Sunday 21 June and will be available on the ITV Player for 30-days after broadcast.