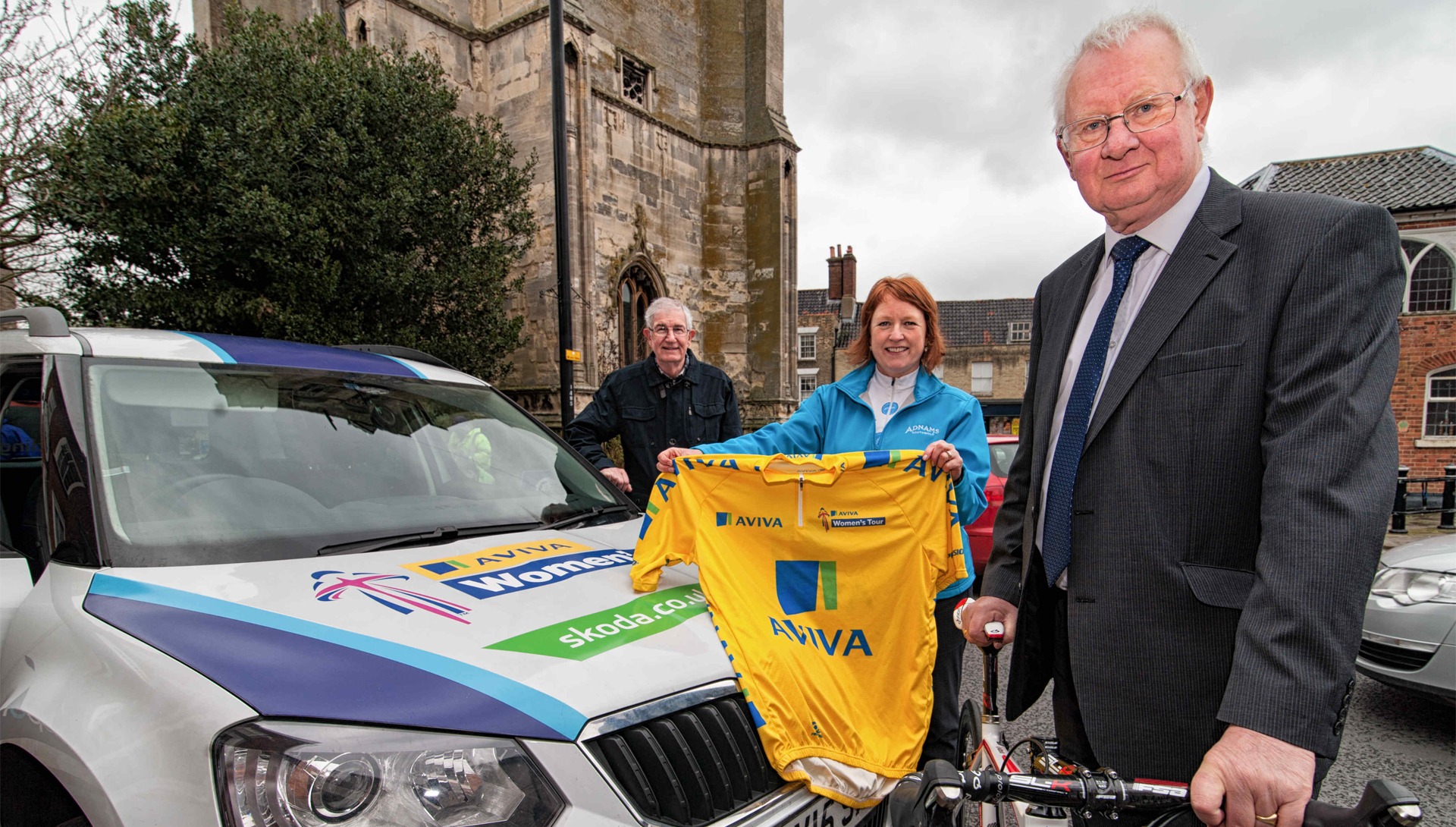 Further details of Stage One of the Aviva Women’s Tour from Southwold to Norwich have yesterday (Wednesday 6 April) been announced, along with the locations for the opening Chain Reaction Cycles Sprints and Strava Queen of the Mountains sections.

Further details of Stage One of the Aviva Women’s Tour from Southwold to Norwich have yesterday (Wednesday 6 April) been announced, along with the locations for the opening Chain Reaction Cycles Sprints and Strava Queen of the Mountains sections.

Businesses from Suffolk joined local dignitaries in Beccles, location of the opening Chain Reaction Cycles Sprint of the 2016 Aviva Women’s Tour to mark the occasion, with the race, now a part of the UCI Women’s WorldTour, passing through the town on Wednesday 15 June.

The opening stage of the third edition of the Aviva Women’s Tour will begin from the North Parade in Southwold, home of principal stage partners Adnams, passing through Blythburgh before the first Strava Queen of the Mountains climb of 2016, into the Suffolk village of Halesworth.

“The 2016 Aviva Women’s Tour route looks fantastic and we are delighted that the opening stage is from Adnams’ home town of Southwold. We are busy working with other businesses in the town to ensure that these elite cyclists receive a warm welcome and enthusiastic send off,” said Emma Hibbert, Marketing Director for Adnams. Beccles will be the first Chain Reaction Cycles Sprint of the race, with points and time bonus’ available to the first three riders across the line on Lowestoft Road in the town.

A second Strava Queen of the Mountains climb will come midway through the stage between Flixton and Homersfield, while the final Chain Reaction Cycles Sprint will be in the Norfolk village of Pulham Market.

Cllr Goldson, cabinet member for health at Suffolk County Council said: “The Aviva Women’s Tour provides a wonderful opportunity for communities, towns and villages across the Waveney District to engage with this sporting spectacle as it passes through this part of our fantastic county for the very first time. Evidence from past events has shown us that people are inspired to get active and think about cycling as a direct result of watching the race, which all helps to achieve our ambition to become the most active county in England.

“The Aviva Women’s Tour also provides a fantastic platform for us to showcase the county to an international audience through the extensive TV coverage and distribution of the race highlights which all helps to generate additional visitors to Suffolk and boost the local economy.

“I’m sure that Suffolk and Waveney District residents will once again be out in force to show their support for the race and riders and make the Grand Depart from Southwold a memorable stage of the 2016 race.”

Stage One will finish in the centre of Norwich outside the city’s Guildhall, the first time that the Aviva Women’s Tour has visited either Norfolk or Norwich, after several visits by the men’s equivalent event, the Tour of Britain since 2010.

Ben Jones, Director of Active Norfolk said; “We are really excited to be welcoming the Aviva Women’s Tour to Norfolk for the first time this year. With increasing participation of women and girls high on our agenda this will be an inspirational day and will encourage the people of Norfolk to get out on their bikes this summer. We expect thousands of people to be out on the day with a festival atmosphere at the finish line in the city centre.”

Cllr Ladd, Waveney’s Cabinet member for Economic Development commented, “You really get a sense now that the race is coming and a lot of work is going in to making it a day to remember in Waveney. This is a global sporting event taking place right here on our doorstep and I am really looking forward to it. We will continue to work with our partners and local businesses to ensure we get Waveney on the map and secure the maximum benefit from the event for our communities.”

An interactive Ordnance Survey map of Stage One will be published later this month, along with the full ETA for the stage and a downloadable map of the route.

Highlights of each stage of the Aviva Women’s Tour will be shown every evening during the race on ITV4 and available on demand via the ITV Player.

There will be further announcements about the Chain Reaction Cycles Sprints and Strava Queen of the Mountains climbs for the other stages of the 2016 Aviva Women’s Tour in the coming weeks.