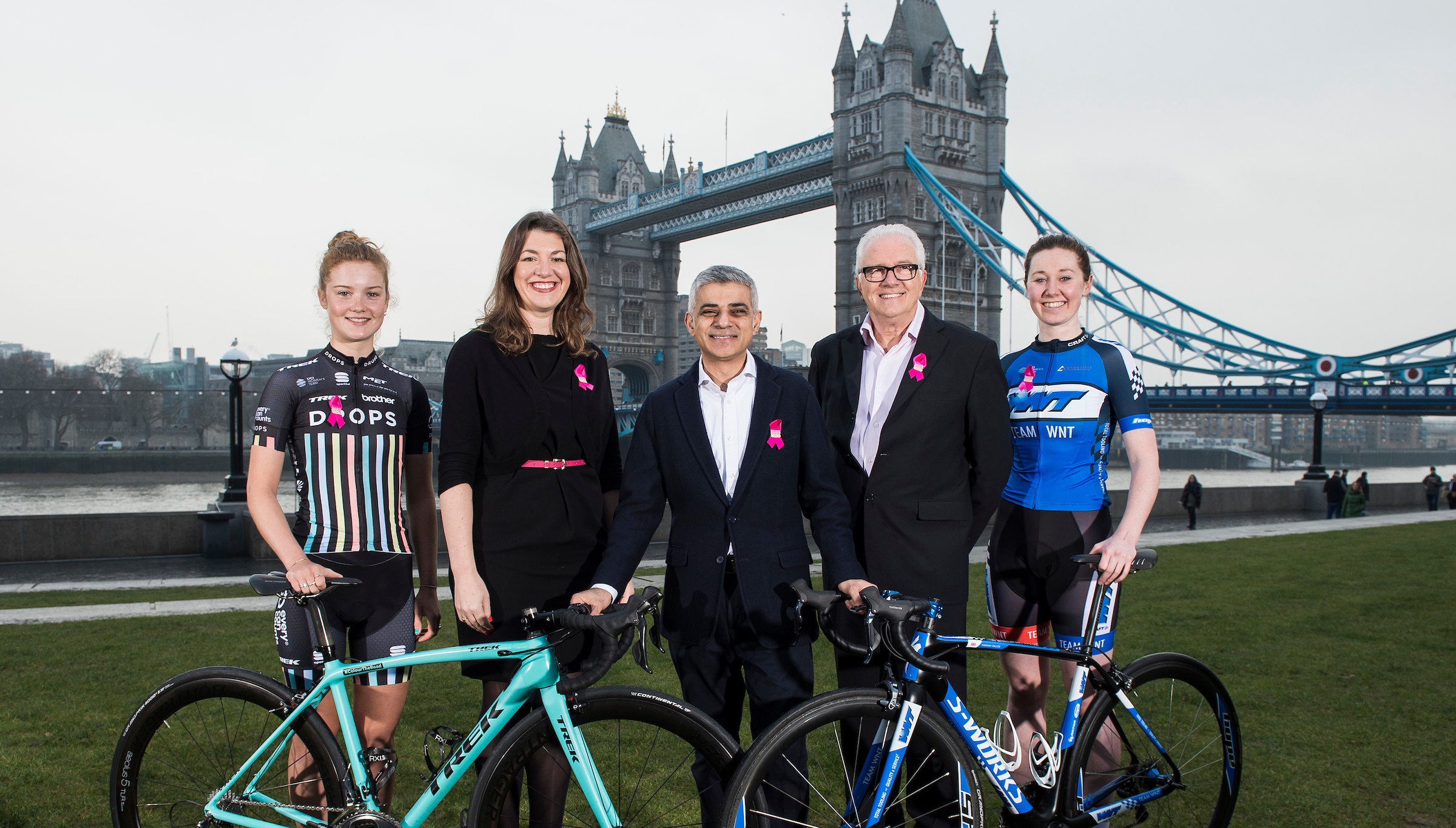 London will host the final stage of The Women’s Tour on Sunday 11 June, as the Mayor of London Sadiq Khan helped Olympic Champion Katie Archibald unveil the route for the 2017 race, which takes place from 7 to 11 June.

London will host the final stage of The Women’s Tour on Sunday 11 June, as the Mayor of London Sadiq Khan helped Olympic Champion Katie Archibald unveil the route for the 2017 race, which takes place from 7 to 11 June.

The fourth edition of the world leading race will also include stages in Northamptonshire, Warwickshire, Stoke-on-Trent & Staffordshire and Derbyshire, plus a major new charity partnership with Breast Cancer Care to celebrate 25 years of the pink ribbon.

All of the world’s top 15 teams will take part in the race, which is a part of the UCI Women’s WorldTour, including the world’s number one team Boels Dolmans, of defending race champion Lizzie Deignan, and Wiggle HIGH5, ensuring British fans can again look forward to cheering on the world’s best riders.  In addition the British-based Drops and WNT teams will complete the 17 team field.

The final stage of The Women’s Tour will take place over 14-laps of the same iconic 6-kilometre circuit as used by the men’s Tour of Britain, starting and finishing on Regent Street St James and featuring the likes of Piccadilly Circus, Trafalgar Square and Whitehall on every lap.

Sadiq Khan, Mayor of London, said: “I’m really excited that the most prestigious women’s cycling race in the world is coming to the streets of central London for the first time.

“Londoners will be able to see their Olympic heroes and the world’s top riders competing up close, reviving the excitement we all felt during the Olympics. The race shows our continuing commitment to London hosting the very best sporting events in world.

“One of my key priorities is making cycling safer and easier for Londoners of all backgrounds, and I hope that having the Women’s Tour here will inspire thousands more Londoners to take up cycling as part of their everyday lives.”

Breast Cancer Care is the Official Charity Partner of The Women’s Tour. This specialist support charity has 1,000 places for women to cycle their Pink Ribbon Tour, completing 25km on the circuit whilst raising money for women facing breast cancer. Everyone will come together in support of the most common cancer affecting women in the UK and to celebrate the 25th anniversary of the pink ribbon.

Samia al Qadhi, Chief Executive of Breast Cancer Care, said: “We are absolutely thrilled to be the Official Charity Partner of The Women’s Tour.

“We only have 1,000 places in the Pink Ribbon Tour. Register now to turn London pink and cycle 25km through the capital’s iconic streets to show solidarity to women affected by breast cancer.”

The Women’s Tour will begin in Northamptonshire on Wednesday 7 June, with the opening stage between Daventry and Kettering before the second stage includes Staffordshire and the city of Stoke-on-Trent.

Warwickshire will welcome a leg of the race for the second successive year, with Atherstone and Royal Leamington Spa the host venues, before the penultimate stage starts and finishes in Chesterfield, where Lizzie Deignan won Stage Three in 2016, and includes extensive climbing for the riders.

Speaking about the race, Team WNT’s Katie Archibald, who won Gold in the Team Pursuit in Rio de Janeiro said; “The race being hosted by London is a fantastic opportunity for women’s cycling and shows how far the sport has grown over the past couple of years.

“I’m excited but also nervous about the opportunity to ride The Women’s Tour since it’s one of the most competitive stage races on the women’s UCI calendar. Riding for Team WNT I hope to make an impact on the road scene after a change of focus from an enjoyable track season in 2016”

“Having the Mayor of London invite us to London for the final stage of The Women’s Tour shows the status of the event, that just three years on from its creation it can be a part of the UCI Women’s WorldTour and feature all of the world’s top 15 teams.  This year’s route will combine testing climbs and beautiful scenery in the heart of England with the London finish, which will be an undoubted highlight of the sporting calendar.

“Counties such as Northamptonshire, Warwickshire and Derbyshire have embraced The Women’s Tour, so this year’s edition will see yet more of the huge roadside crowds cheering on the world’s best.”

Commenting on the launch of the 2017 edition of The Women’s Tour, Hugh Roberts, Chief Executive of race organisers SweetSpot Group said;

“We have a fantastic field of the world’s best teams, a testing route with an iconic finale in the heart of the world’s foremost city and a very important and entirely fitting partnership with Breast Cancer Care. After three editions The Women’s Tour continues to grow and go from strength-to-strength, but to take the event on to the next level we are seeking a title partner to cement our position as the world’s leading women’s race.”

While the Yellow Jersey currently remains unsponsored, Wiggle will proudly add to their support of women’s pro cycling with riders fighting for the Wiggle Points Jersey, awarded to the race’s most consistent finisher, while Adnams will continue as sponsors of the Best British Rider Jersey.  Leading alcohol free wine brand Eisberg will be sponsor of the intermediate sprints while a new sponsor for the Queen of the Mountains classification will be announced in the coming days.

A one-hour highlights programme of every stage will be broadcast daily on ITV4 and available on demand via the ITV Hub. The Women’s Tour is a part of the UCI Women’s WorldTour, comprising 20 events around the world in 10 different countries.

Further details of the stages of The Women’s Tour will be announced over the coming weeks, including the locations of the Queen of the Mountain climbs and Eisberg Sprints for each day.

Amateur cyclists will also be able to get on their bikes in Northamptonshire one week after the final stage on Sunday 18 June in The Tour Ride Northamptonshire, using some of the roads used by the world’s best in the county.  40 and 80-mile sportive routes, plus a 10-mile Family Ride will aim to get people on their bikes to celebrate the race.