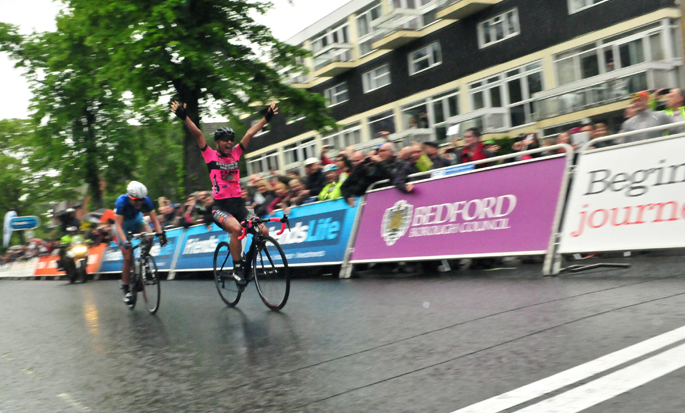 After an impressive victory in a rain swept stage, find out more about Rossella Ratto and the parallels with a win for a brother last September.

After an impressive victory in a rain swept stage, find out more about Rossella Ratto and the parallels with a win for a brother last September.

FOR some reasons Italian riders – male and female – are often labelled collectively as not being good in the rain and wet conditions but nothing could have been further from the truth yesterday in the second stage of the Friends Life Women’s Tour, a testing 118.5km run from Hinckley in Leicestershire down to Bedford.

Young Italian Rosella Ratto, a recent junior World Champion and already a Bronze medal winner in the senior World Championships, hit the green button and disappeared off into the distance with over 60km to go and rode with style and panache all the way to finish line down on the Embankment where a packed crowd roared her home. Accompanying Ratto much of the way was another Italian, Susanna Zorzi, who is an 'old' friend, rival and room-mate from various Italian teams and together they rode supremely well to hold off a charging peloton. With 20km to go the peloton suddenly seemed to be surprised to find themselves two minutes behind such a dangerous rider and finally stirred themselves.

Hailing from Bergamo, north east of Milan, Ratto is no stranger to rain and a bit of weather and indeed her brother Danielle Ratto, who rides for Cannondale, won Stage 14 of the Vuelta last year in pouring rain at Col de la Gallina in Andorra.

“This morning I was hoping the weather would improve but it didn’t but in the race I was thinking of my brother's solo win in the rain in the Vuelta and that perhaps this is something I could do as well.  The conditions were not a problem – Bergamo is in a valley and we get a lot of wind and rain – I am well used to it.

“I originally attacked to get the points for the Queen of the Mountain but I continued because I felt good – I am training for the time-trial at present – so I thought why not? I was on the point of giving up when Susanna came across to me from the peloton. Two is always better than one so we started to ride hard again. The gap started going up and we thought maybe we could do it.

“I was still afraid the peloton would get back to us in the final 4km but Susanna, who is a good friend, helped me a lot and we were able to ride all the way to the finish it was a dream. Susanna is just a year older than me so we have raced against each other for almost all of our careers but we have also been colleagues with Italy.  We know each other really well and we both knew this could be our chance. Susanna always goes full gas, she was the best rider I could hope to have join me in the breakaway.” Ratto's stage win and the time bonuses she gained during the day propelled her into the GC leader's Friends Life yellow jersey with Zorzi’s efforts moving her up to second overall, five seconds behind. Then come the big name trio of Marianne Vos, Emma Johansson and Britain's Lizzie Armistead who is now 14 second behind Ratto. In such a tight race you fancy the British national champion will probably have to conjure up a stage win during one of the final three stages if she is to challenge for the overall title.

Britain currently has two other riders in the top ten. Hannah Barnes is in sixth position overall, just a second behind Armitstead while Lucy Garner again rode strongly on a day when the race went past her home in Cosby to finish fifth in Bedford, a ride which places her tenth overall.

Yesterday was a big day for the Friends Life Women’s Tour.  After the sunshine and blaze of publicity which greeted Wednesday's Depart in Oundle it would have been very easy for a sense of anti-climax to envelop the race as a dirty blanket of rain settled over the East Midlands. After the Lord Mayor's show etc

Oundle was already a distant memory yesterday morning as the rain hammered down at the start at Hinckley. The longest, possibly hardest, day of the Tour stretched ahead while riders and fans alike needed to pack the waterproofs. Not a day for the faint hearted.

But of course this Britain where we have been conditioned to expect bad weather at our major outdoor sporting events. Sluicing rain and puddles are not the deterrent it is in most countries and the crowds were again excellent, especially during the final stages of the approaches into Bedford

And whisper it quietly but most of the top riders really don't mind rain too much as long as it is not accompanied by numbing cold, high winds or Franz Klammer style descents. Quality riders enjoy the extra emphasis that rain puts on their bike handling and general cycling savvy. It brings their skills to the fore.  And with the forecast for the next three days not the most encouraging the wet weather specialists might continue to make hay in the sun. As it were!