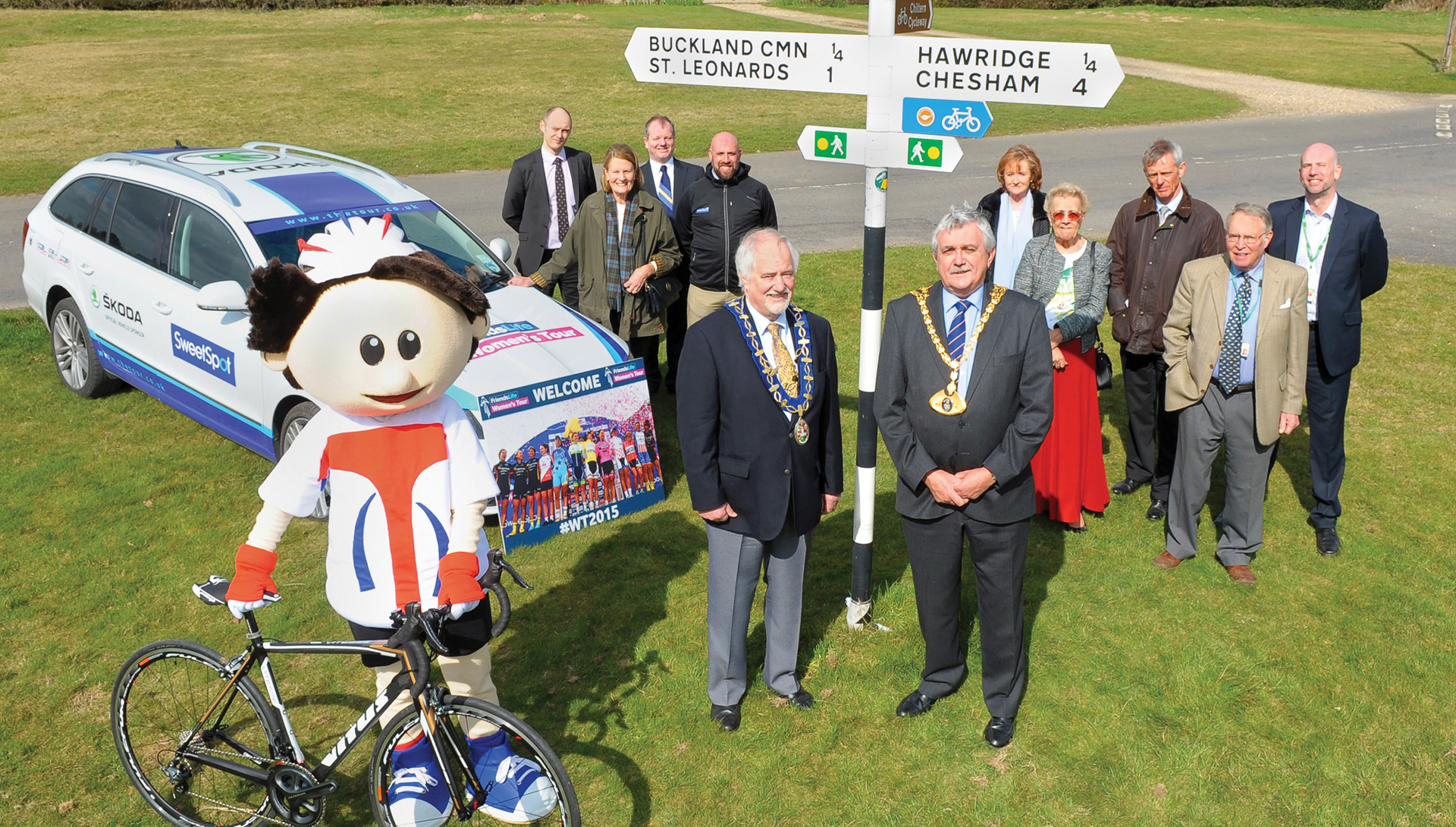 Dignitaries from the Stage Five Friends Life Women’s Tour partners have gathered on the Buckinghamshire/Dacorum border at Cholesbury to officially mark hosting the event on Sunday 21 June.

Dignitaries from the Stage Five Friends Life Women’s Tour partners have gathered on the Buckinghamshire/Dacorum border at Cholesbury to officially mark hosting the event on Sunday 21 June.

Further details have today been revealed for the route of the final stage of the 2015 Friends Life Women’s Tour, which will take the world’s top female cyclists over the testing climbs of the Chiltern Hills from Marlow in Buckinghamshire to Hemel Hempstead in Dacorum.

The 102-kilometre, 64-mile, final stage on Sunday 21st June, much of which will be held within the Chilterns Area of Outstanding Natural Beauty, passes through the likes of Stokenchurch, Great Kingshill, Great Missenden and Chesham in Buckinghamshire before crossing into Dacorum and passing through Tring and Hemel Hempstead.

Dignitaries representing the stage partners gathered on the Buckinghamshire/Dacorum border at Cholesbury, which is on the Stage Five route, along with Friends Life Women’s Tour organisers and official mascot ToBi to mark the announcement.

Buckinghamshire County Council's Cabinet Member for Health and Wellbeing Patricia Birchley commented: “Cycling is a popular pursuit in Bucks, and I'm really pleased that the Friends Life Women's Tour is visiting us to provide a further inspiration to get people out and enjoying the county's countryside by bike this summer.” Cllr Julia Adey, Wycombe District Council’s Cabinet Member for Community, (pictured left), commented: “We are really excited to be hosting the start of the final stage of the Friends Life Women’s Tour in Marlow. As the cyclists speed their way around the Wycombe district they can certainly expect a very warm welcome from local residents and businesses who I’m sure will be out in force, cheering them on. It’s going to be a great privilege to see elite athletes in action in a major national sporting event, on our very own doorsteps.”

Chiltern District Council’s Chairman, Cllr Noel Brown, said: “We’re delighted the tour is again passing through our district and hope Chiltern residents will turn out in force on June 21 to cheer the cyclists on. My real hope is that this will inspire more of us to get active and enjoy the benefits of a healthy lifestyle.”

Nigel Moore, Leap Board member, commented: “Leap are delighted that the Friends Life Women’s Tour will be returning to the county again and hope that the event will inspire residents to get on their bikes and try this fantastic way to travel for themselves; whether that be commuting or enjoying the fantastic Buckinghamshire countryside. As England’s most sporty county, Leap will ensure that there are a whole host of local opportunities on offer to support people to get cycling. You can find out more at www.leapwithus.org.uk”

Cllr Allan Lawson, Mayor of  Dacorum Borough Council, said: “Following the success of the borough hosting the penultimate stage of the men’s Tour of Britain cycling race last year, I am delighted that Dacorum has been chosen to do the same for this year’s final stage of the Friends Life Women’s Tour race.   It says much for the efforts and expertise of Dacorum Borough Council staff involved in making these arrangements that once again there will be an opportunity to showcase what our borough has to offer in terms of business opportunities and tourism around the world, and also giving our residents the ability to be part of this fantastic major international sporting event.”

The final stage of the Friends Life Women’s Tour builds on the success of last September’s memorable sixth stage of the men’s Friends Life Tour of Britain, which passed through Buckinghamshire and the Chilterns before finishing in Hemel Hempstead, where Alex Dowsett took the race leader’s Friends Life Yellow Jersey.

Starting from Marlow’s High Street at 11am, Stage Five of the Friends Life Women’s is expected to finish alongside Gadebridge Park in Hemel Hempstead at around 2pm, with highlights of the race being shown on ITV4 that evening, and repeated the following morning.

From Marlow the race will head alongside the River Thames to Medmenham turning right and climbing to Stokenchurch and on into the heart of the Chiltern Hills. Passing below the famous Hellfire Caves, the route climbs Bledlow Ridge before returning to West Wycombe and close to the famous National Trust property of Hughenden Manor, before the climb to Great Kingshill.

The stage route then passes through Great Missenden and on to Chesham via Frith Hill, before crossing into Dacorum.

From Tring the route will head to Potten End via the Ashridge Estate and the final climb of the day of Tom’s Hill Road outside Aldbury, descending into Hemel Hempstead before the finish on the Leighton Buzzard Road, used in the opposite direction to last September’s men’s finish.

The stage will also feature two intermediate Sprints and two Queen of the Mountain climbs, with the locations of these to be announced in the coming weeks.

“Stage Five will be an extremely picturesque run through the Chilterns, whether for spectators at the roadside or watching the ITV highlights” said Andy Hawes, Route Director for race organisers SweetSpot, and himself originally from Buckinghamshire.

“It is also a very challenging route with approaching 1,400-metres of total ascent, so nobody should expect this to be an easy final stage to the Friends Life Women’s Tour.”

Stage One of the Friends Life Women’s Tour takes place on Wednesday 17th June, heading from Bury St Edmunds to Aldeburgh on the Suffolk Coast in a 110-kilometre opening stage, before the second stage from Braintree to Clacton.

16 teams from nine different countries will take part in the 2015 Friends Life Women’s Tour, including 12 of the world’s top 15 ranked teams, led by the team of defending champion Marianne Vos, Rabo Liv.  In total 96-riders will take part in the race, with the identities of the riders being announced during April and May.