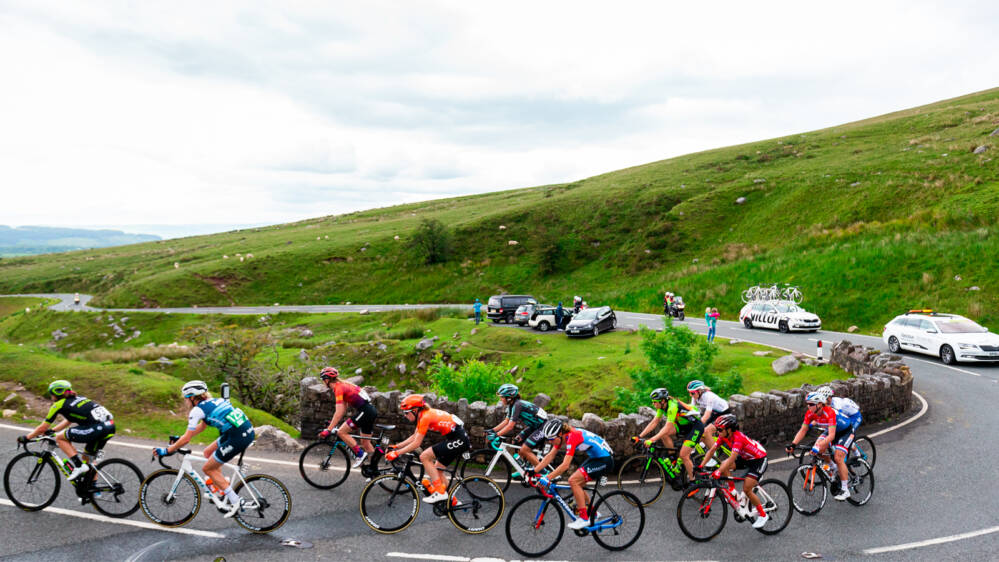 There is one week to go until the Women’s Tour races from sea-level to its highest ever summit finish at the top of the Black Mountain, at the end of stage five on Friday 10 June, in what is set to be the queen stage of the race.

There is one week to go until the Women’s Tour races from sea-level to its highest ever summit finish at the top of the Black Mountain, at the end of stage five on Friday 10 June, in what is set to be the queen stage of the race.

While riders will roll out from sea level at Pembrey Country Park, one of Wales’s top visitor attractions and host of the 2019 finale, the day’s finish line comes atop the Black Mountain near Llangadog in the Brecon Beacons National Park.

It is the second hill-top finish in Women’s Tour history and one of the toughest routes measuring 7.2 kilometres in length, with the Black Mountain averaging a gradient of 5.3% and ramping up to 21% in places. The route was previously tackled during the final stage of the 2019 race when British rider Hannah Barnes (Uno-X Pro Cycling Team) climbed it the fastest in a time of 20:50.

Riders look ahead to the stage

Former British road race champion Jess Roberts (Team COOP – Hitec Products), who is set to make her race debut, hails from nearby Carmarthen. She said: “The Women’s Tour is one of the races I’ve always really wanted to do. I was meant to do it in 2020 but obviously couldn’t because of the pandemic and then last year I wasn’t able to because of injury so I’m really excited to be on the start line this year with Team Coop – Hitec Products. I’m particularly excited for stage five, which goes from Pembrey and finishes up the Black Mountain.

“The whole route goes along my home training roads so will be really special to race on them, and my family will be able to watch too! It will definitely be a tough stage that’s for sure!”

Another rider hailing from Carmarthen is CAMS – Basso’s Ella Barnwell, who won’t be racing in the Women’s Tour but added her insight. “I’m really excited to see there are going to be a couple of stages in Wales this year, one of which comes so close to my hometown of Carmarthen,” she said.

“It’s a lovely scenic climb that is an iconic climb in Carmarthenshire, I have trained up and around the Blacks for years and it will be amazing to race up. Carmarthenshire has a massive cycling community and the Black Mountain will be packed with spectators from top to bottom!”

Likewise Le Col – Wahoo rider Eluned King, from Swansea, added: “Stage five of the Women’s Tour will prove decisive for the overall classification. The parcours is very hard, even before finishing on the Black Mountain. The roads are narrow and technical, especially around Brechfa, and if the weather is bad, the favourites will have to stay in the top 20 positions all day to be safe.

“The Black Mountain from Llangadog side is long, with several kilometres of climbing before the official start of the climb with around seven kilometres to go. The eventual winner will have to be strong, but also smart with her efforts.”

Also hailing from Carmarthenshire is former rider now GCN presenter Manon Lloyd, who rode the last Women’s Tour stage in the county in 2019. She said: “This is going to be a phenomenal stage, gruelling undulating roads and finishing on the beautiful Black Mountain.

“Crwbin Hill has been on my door step for years and it’s a climb I try to avoid as it’s so hard but throwing this into the route is going to make for some amazing racing. This is no doubt going to be a day for the climbers and GC riders, I can’t wait to be at the ride of the road watching this year.”

Upon leaving Pembrey Country Park at 11am the peloton will pass through Carway, Pontyates, Pontyberem, Nantgaredig, and Llangadog en route to the Black Mountain.

A rolling road closure will take place along the 106.6-kilometre route from 10.30am until approximately 2.30pm. Roads will be re-opened once the cyclists have passed through. A full road closure will be in place over the Black Mountain from 5am to 5pm.

Spectators are being urged to plan their journey in advance as the roads are likely to be busy.

Carmarthenshire previously hosted the Grand Départ of the Tour of Britain, as well as the overall finish of the Women’s Tour in 2019 and a Tour of Britain team trial stage in 2021. It is quickly building its reputation as one of the UK’s premier cycling destinations, for both leisure, and for hosting top events providing a major boost to the local economy.

Cabinet Member for Regeneration, Leisure, Culture and Tourism Cllr Gareth John said: “ I am delighted to welcome the Women’s Tour to Carmarthenshire once again, and I am even more delighted to hear that local cyclist Jess Roberts will be competing, alongside some of the world’s top cyclists. It promises to be an exciting day out and I hope the residents of Carmarthenshire will come out to show their support.

“Carmarthenshire County Council is committed to supporting more people to get fit and active, whilst growing the local cycling tourism economy. Hopefully, this will encourage more people to get on their bikes and, with televised coverage across the world, show what Carmarthenshire has to offer, attracting even more visitors to spend their time and money in the county.”