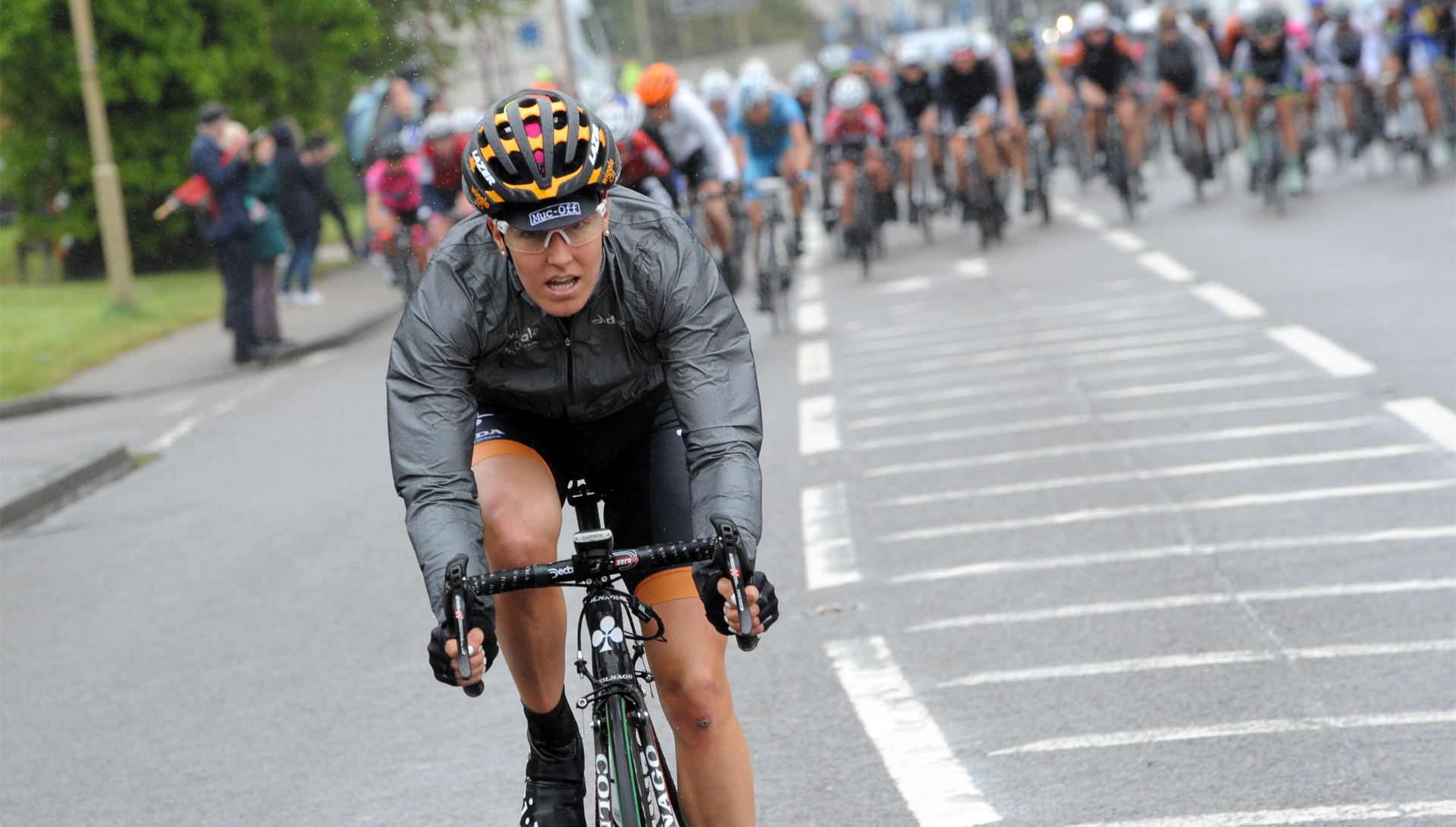 As she continues her comeback from a horrific training crash, Brendan Gallagher caught up with Dani King to talk about her aims for the 2015 season on the road and how her Open University degree provides a welcome distraction from cycling.

As she continues her comeback from a horrific training crash, Brendan Gallagher caught up with Dani King to talk about her aims for the 2015 season on the road and how her Open University degree provides a welcome distraction from cycling.

ONE of the most startling sporting image I can recall from last year was the x-ray which Dani King posted of her five snapped ribs after that training crash in Wales in November, which is impossible to view without wincing and crunching your eyes up.

The shards of splintered bone also punctured one of King's lungs but King is a tough cookie and after returning from her final training camp in Majorca this week she will return to the fray in earnest next week as a busy season on the road beckons. “Just seeing that x-ray was horrible, you know you have injured yourself but it was pretty terrifying to see it in such graphic detail,” recalls King. “It's amazing how quick the body heals though. I can't believe how well I am going right now.

“I had to recalibrate my season and basically start everything two months later than intended. Originally I had planned to go out to Australia for the Tour Down Under and the Bay Crits in January but clearly that was going to be completely out of the question.

“So now I have just finished my final training phase in Majorca and am set for my return proper. I put my toe in the water by doing a two-up 25-mile Club TT at Port Talbot with my boyfriend Matt Rowe and I also did a couple of track races at the opening of the Derby track recently when it was great to get a number on my back again. “In many ways it hasn't worked out too bad because at this moment in time I feel the best I have ever felt. There has been time to really work on things and you don’t often get that in sport. I’ve been able to put a consistent series of training blocks together and there has been no pressure other than to simple get healthy and strong. I've done one stint in Lanzarote and two in Majorca (left) and been blessed with good weather all the way.

“From January 1 I started training properly again, like a professional athlete. Just before Christmas I went out for my first ride and it was quite tough emotionally. We chose a very flat piece of road down in Wales where I am based and during the hour I had to stop or get off four times because my back was so painful. All the back muscles had gone stiff trying to protect my ribs I suppose. They didn’t want to play ball at all.

“It was incredibly painful for a short while but I really am a believer that things happen for a reason and since those first few tentative rides the luck seems to have gone my way. I have enjoyed great weather and feel very energised and happy with life.

“I'm hoping to make my debut proper at the Tour of the Reservoir on April 11, followed by the Noel Jones road race and then three races in back in Europe in Holland, Belgium and then the Tour of Luxembourg.

“That will all lead into the Friends Life Women’s Tour which is my first big target of the season, I want to ride really strongly in the event this year. I loved everything about it last year, there was such a great atmosphere surrounding the race and the crowds were so supportive. Then after the Women’s Tour I want to put up a performance in the Nationals.”

Midway through her rehab and tr

aining, back in February,   the Australian Women’s Team Pursuit squad ended Great Britain's long dominant reign in the event with a stunning world record of 4mins 13.683secs at the World Championships in Paris. That phenomenal ride has certainly stirred the event up ahead of Rio and although the Great Britain quartet recorded their fastest ever time at sea level, they were nearly three seconds back with 4.16.606.

“There were slightly mixed emotions, it was some ride from the Aussies,” admits King. “First and foremost I was just plain disappointed for GB and that it was a Silver and not a Gold and that our run in the big championships had gone. I was still very proud of how they went though.

“It was a superb ride by the Australians in Paris but in truth we always knew that they would produce something like that sooner rather later. They have such a strong squad and they have been chasing us so long and so hard. So well done to them but no panic from Great Britain. That was still the fastest ever sea level ride and now we are in the great positon of having a target to chase ourselves which will be a massive motivator and a bit different from being the pace setters. The dynamic has changed and that could be a good thing after the team everybody was aiming at for four or five years.

“A little bit of me wished I had been there riding but it wasn’t like 2014 when I got ill and then just couldn’t earn my place in the team. Even before my accident I was never going to be riding the Paris Worlds this year. I had made the big decision to take a year out of track and concentrate on the road with a view to getting back into the Team Pursuit squad for Rio 2016.

“My reasoning is pretty simple really. When the Women’s Team Pursuit went from 3km to 4km nobody was quite sure how it was going to work out and the reality is that I have really struggled with that extra kilometre.

“As a track rider I am more of a sprint athlete and I decided to go away and have a rethink and get back to basics. I clearly needed to build up my endurance and talking to riders like Brad Wiggins, Geraint Thomas and Pete Kennaugh they all said that a really long spell on the road had often helped their performance on the track with the GB Men and that as they got more experienced they could make the transition very quickly. Above – (left) with some of her 2015 Wiggle Honda teammates, including Matrix Fitness GP Series Champion Eileen Roe (third from left)

“I had already noticed that my best contributions to the track squad always came after one of the road camps we did but they were few and far between. Last season I possibly did only two 20-hour road weeks or so – I'm the kind of rider who needs much more than that to build up my endurance base. So I talked it all through with Shane Sutton and Paul Manning and decided to commit to a full season racing on the road with Wiggle Honda with that exact purpose in mind. They will have access to all my training and racing data throughout the year.

“I will do the occasional track session, mostly as power strength training, but mainly its road all the way this season until the British national track champs in September when as well as racing we will look at the numbers and see how my body is performing on the track. Needless to say I am hoping to make a strong case for inclusion back in the TP squad!”

Although King makes light of the situation it has been a tough 18-months or so. It must have been disconcerting to say the least to have your Olympic Gold medal winning event suddenly changed and to be the rider most affected by the radical upheaval. That required a brave decision to step back in order to advance and then, on top of all that, came the crash.

Sport is rarely a smooth progression and staying strong mentally is half the war and the ability to switch off is no bad thing and in King's case studying for an Open University degree has provided a welcome distraction. Still only 24 there is every chance she would have gone to university had she not become so good so young at her chosen sport and had London 2012 not basically taken over her life, but the Open University system however provides a wonderfully flexible and worthwhile alternative

“I started back in 2010 – it’s their basic BA Hons Open University degree – and the system is that you have nine years to complete your course by accumulating 360 points from studying various modules.  In that respect it's very flexible and you can take periods of time off so I did no studies whatsoever in 2012 because of the Olympics.

“But once you start a module, and they are mainly worth 60 points each, there is a set period time for the course work and all the projects and essays have to be delivered on time. So at specific times there is quite a bit of time pressure and you have to be organised.

“I am currently doing a sports psychology module which is worth 60 points and is definitely one of the most interesting I've studied. Just recently I've been getting my head around – academically – coaching behaviours, the lifespan of an athlete, injuries and dealing with the highs and lows of winning and losing which is all stuff I can relate too from first hand experiences.

“I won't deny it’s hard to sit down and study or start trying to piece an essay together sometimes when you have come in from a four hour ride or you have been on the road for a few days but equally if you can just make that start you soon lose yourself in the subject and that takes your mind away from cycling altogether which can be a very good thing.

“When I finish the sports psychology module I will be half way through with 180 points so it’s all dovetailed quite nicely so far. If you are a member of the BC Programme you also get a grant to help with outside education so that has been good as well. It was certainly an opportunity I was very keen to take. Mind you I am hoping I have to put my studies aside again next year and that Rio2016 takes over!”