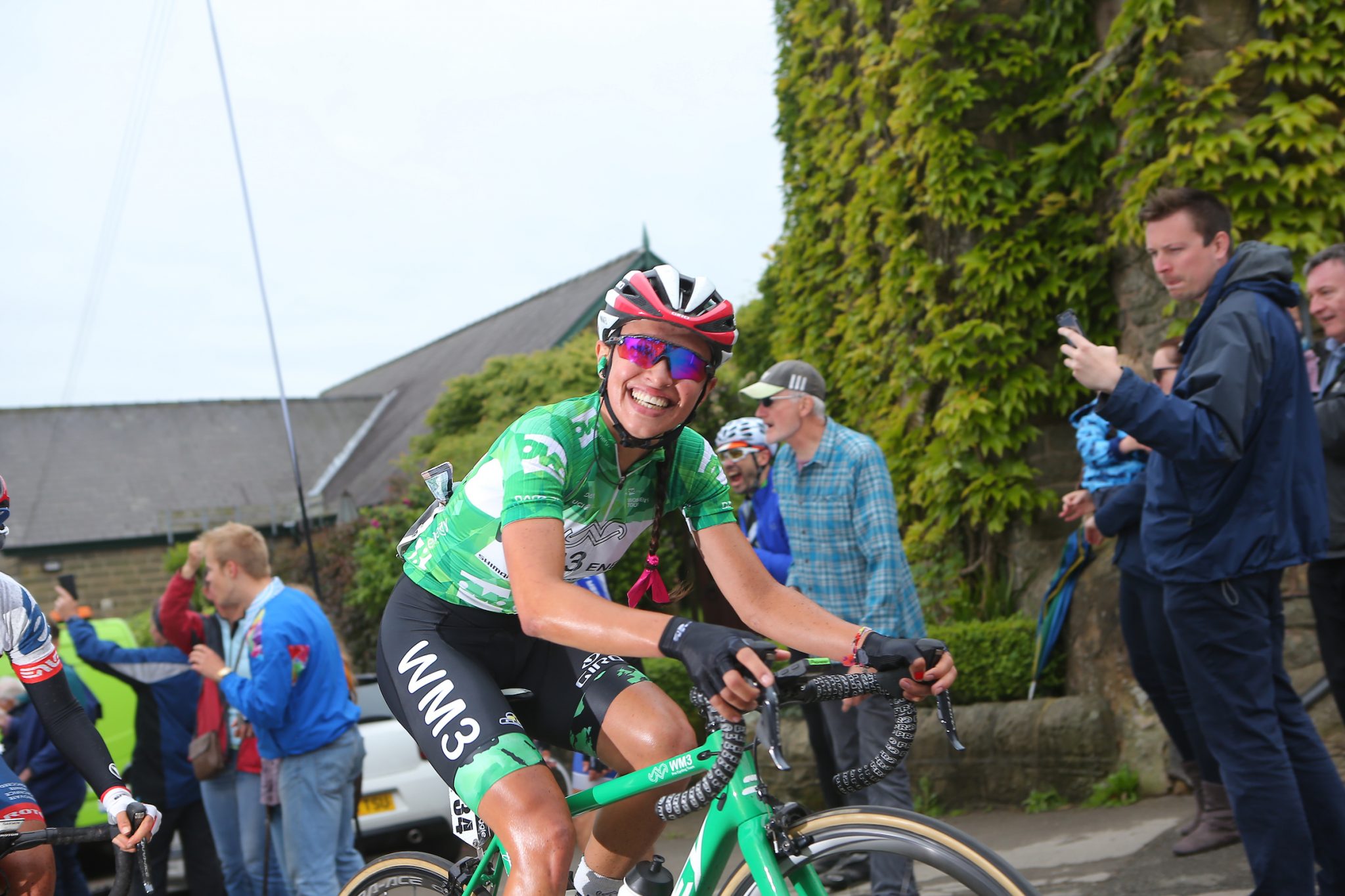 Katarzyna Niewiadoma held onto the race leader’s OVO Energy Green Jersey at the conclusion of the penultimate stage of the OVO Energy Women’s Tour in Chesterfield, but only after resisting a stern challenge from her rivals on the roads of Derbyshire.

Katarzyna Niewiadoma held onto the race leader’s OVO Energy Green Jersey at the conclusion of the penultimate stage of the OVO Energy Women’s Tour in Chesterfield, but only after resisting a stern challenge from her rivals on the roads of Derbyshire.

The Polish National Champion, who has led the OVO Energy Women’s Tour since Stage One in Northamptonshire on Wednesday faced her strongest challenge yet in the four days of racing, with Christine Majerus at one stage becoming the virtual green jersey on the road, ending the day in second overall, 1-minute and 25-seconds back from Niewiadoma, who described it as “one of the hardest races I’ve done in my life.”

“I knew it was a really dangerous move and I knew we had to start riding to bring her back. I tried to stay calm and relaxed and only think positively,” said Katarzyna Niewiadoma after the finish.

“As soon as you start thinking negatively you become nervous. What made it easier for my head is that I knew the course was hard and the climbs suit me. I also knew that some teams would be destroyed on this course; it wasn’t easy to stay in the front group.

“My DS was coaching me, giving me advice on what I had to do. Of course it’s impossible to control every attack but I tried as much as I could. I’m super happy that the OVO Energy Green Jersey is still with me. It was really cool that Cervélo Bigla and Canyon//SRAM helped us chase the breakaway down; I knew Canyon would want to keep Hannah Barnes in third on GC, so it was really cool that they were eager to ride.”

The stage win went to Orica Scott’s Sarah Roy, as an Australian came out on top in the OVO Energy Women’s Tour for the second day running following Chloe Hosking’s win in Warwickshire on Friday.

“I’m really excited, elated and thrilled to take the victory, especially given the efforts that the team have put in for the past few stages,” said Roy speaking afterwards. “Gracie [Elvin] was in the break yesterday and got caught with five kilometres to go, which was both exciting and disappointing, so for us to have another dig today and pull it off was awesome.

“I was preparing for a bunch sprint because the girls behind were lighting up. We just happened to dig really dig on an uncategorised climb towards the finish; I took a few fewer turns but [Christine] Majerus really put the hammer down. I just held her wheel and I took over on the descents.

“I felt pretty good coming into the finish. I didn’t want to be the one attacking but I was really confident following the wheels. I’m actually really surprised – it was very hilly and I’m not a climber. It was a hard race.” Team Sunweb’s Leah Kirchmann also jumped up the order, elevating herself to third overall, 11-seconds behind Majerus, as the Barnes sisters dropped to fifth and sixth, with Hannah retaking the higher position and the Adnams Best British Rider jersey.

Kirchmann was part of a day-long three rider break including Shara Gillow and eventual winner Roy that was joined by Majerus, who bridged the gap from a small chasing group with 77-kilometres of racing remaining.

Buoyed by Majerus’ presence, and with no chase initially behind, their lead swelled putting the Luxembourg champion into the virtual race lead.  With Cervelo Bigla and Canyon//SRAM aiding the isolated Niewiadoma in the chase, they were gradually reeled back in, until with Roy, Majerus and Kirchmann contesting the finish.

Having saved her legs for the finish, Roy led from the front outsprinting Majerus on the cobbled finish line, with Kirchmann coming home third for the final bonus seconds.

Audrey Cordon-Ragot sealed the SKODA Queen of the Mountains climb ahead of the final, flat, stage in London, finishing with a six-point lead over Lucinda Brand.

“It was a hard day, I think we did really good in protecting the jersey” said the Wiggle HIGH5 rider speaking following the podium ceremony. “The first goal of the day was to target the first SKODA Queen of the Mountain climb at Middleton Top, which we did. The only thing was that if Lucinda won the second SKODA Queen of the Mountains climb we would lose the jersey, so we had to stay awake. Obviously with it being a hard race, it was easiest for me to keep the jersey with a breakaway up the front.

“I knew I had really good legs from the Ardennes. I’ve found a really good shape this year and a nice way to ride my bike, so it’s a nice reward. But I wasn’t coming for that, I was coming to help Giorgia and Jolien win as many stages as I could, but it’s really nice I have a reward.” Highlights of the third stage of the OVO Energy Women’s Tour are on ITV4 at 23:00 on Saturday 10 June, with a repeat the following morning on the same channel.  The highlights will also be available on demand via the ITV Hub catch-up service.

The OVO Energy Women’s Tour concludes in central London on Sunday 11 June, with a 10-lap circuit race starting and finishing on Regent Street St James.  The 62-kilometre leg gets underway at 15:30 and is preceded by the Pink Ribbon Tour, a 25-kilometre ride for 800-women to celebrate the 25th anniversary of the pink ribbon, in aid of Breast Cancer Care, the Official Charity Partner of the OVO Energy Women’s Tour.