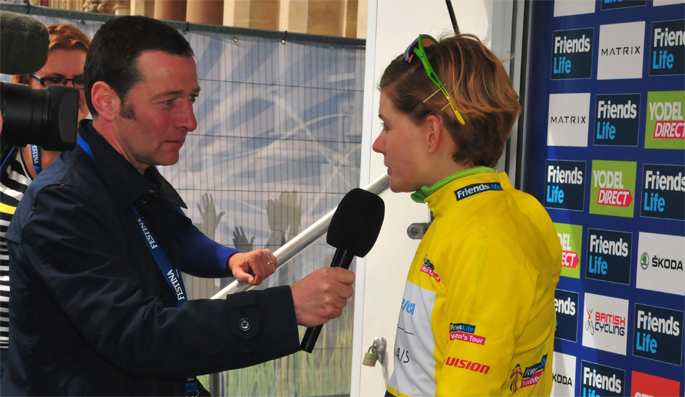 Ned Boulting, known to legions of British cycling fans for his work covering professional cycling for ITV, is the latest big name to commit to the 2016 Aviva Women’s Tour charity event, which will take place in Southwold on the eve of this year’s race, Tuesday 14 June.

Ned Boulting, known to legions of British cycling fans for his work covering professional cycling for ITV, is the latest big name to commit to the 2016 Aviva Women’s Tour charity event, which will take place in Southwold on the eve of this year’s race, Tuesday 14 June.

Taking place in the first-class setting of The Swan in Southwold on the evening of Tuesday 14 June, the event is supported by Adnams and will be in aid of SportsAid, a charity raising money to support young talented sportsmen and women from Suffolk.

Ned Boulting has confirmed that he will compere the evening whilst Mick Bennett will share his experiences of a life in professional cycling and Laura Wright will undertake an exclusive performance.

Mick Bennett won bronze medals in the Team Pursuit at both the 1972 Munich and 1976 Montreal Games. Mick is the Race Director at SweetSpot Group, organisers of the Aviva Women’s Tour, one of the biggest races for women in world cycling, the Tour of Britain, the Pearl Izumi Tour Series and Prudential RideLondon. Laura Wright is ‘the nation’s sporting soprano’. Almost a decade after winning BBC Radio 2’s Chorister of the Year Award, 25-year-old Laura has performed extensively at sporting events including at the FA Cup Final. She was the first mezzo soprano to perform at the Olympic Stadium and has enjoyed many performances at prestigious venues such as the Royal Albert Hall, Royal Festival Hall, the Royal Opera House, Wembley Stadium, Wembley Arena, The O2, Twickenham Stadium, Buckingham Palace and Westminster Abbey. Laura will join the event fresh from performing at this year’s Invictus Games.

Tickets, which cost £50 each or £450 for a table to ten, include a glass of fizz and canapes on arrival, a fabulous two course meal and all wine and beer. Doors open at 6.30pm.

SportsAid – Supporting the sports stars of tomorrow today
Before they become a household name, an elite sportsman or woman will spend 100,000 hours and thousands of pounds pursuing their dream. Many are forced out long before it comes true.

SportsAid makes it possible for young athletes to pursue their dreams, so that – like 18-year-old Steve Redgrave in 1980 and 13-year-old Kelly Holmes in 1983 – they can one day go on to inspire a nation.

At London 2012, almost two-thirds of the British team were former recipients of SportsAid’s support, winning 20 Olympic and 27 Paralympic gold medals between them. For many, SportsAid were their only means of support at a crucial, early time in their career, before other sources of funding are available. SportsAid continues to work with the governing bodies of 50 disciplines to ensure the right athletes receive support.

Suffolk SportsAid
Suffolk SportsAid was established in 2007 as a legacy from the London 2012 Olympic and Paralympic Games, to support individuals with cash awards in the defining early years of their careers.  Since it was launched the Foundation has made in excess of 190 grants to talented athletes from Suffolk distributing over £150,000.  The Foundation is proud to have supported six of Suffolk’s London 2012 participants including both medallists (boxer Anthony Ogogo and powerlifter Zoe Newson) and Glasgow 2014 Commonwealth Games double gold medallist Chris Walker-Hebborn.