The latest column from Brendan Gallagher is here, looking at the Hour record attempt of Jack Bobridge and catching-up with Lizzie Armistead ahead of a busy 2015.

The latest column from Brendan Gallagher is here, looking at the Hour record attempt of Jack Bobridge and catching-up with Lizzie Armistead ahead of a busy 2015.

At the risk of becoming an Hour bore – never I hear you cry – I was fascinated to look at the 'Manhattan' of Jack Bobridge's lap times from his failed attempt at the Australian National Track championships over the weekend. Never have I seen such agony and suffering depicted in such clinical black and white terms.

Everybody I have spoken to during the recent surge of interest in the Hour, including most recently Alex Dowsett before his postponed attempt, was agreed on one thing. The trick has to be pace management and banging out laps of 17.3 to 17.4 seconds with metronome consistency with, if the body is able, a slight acceleration right at the end to bring the record home.

Lactic acid is the killer in any Hour attempt and what you don't want is massive highs and lows in your effort and power output, as the 'Manhattan' skyline of the graphic left shows. Squeeze the toothpaste out nice and evenly and steadily as Brad Wiggins always says about best Time Trial efforts on the road.

Bobridge is a track legend, the world record holder in the Individual Pursuit when he covered 4km (16 laps) in 4mins 10.534secs which gives you and average time per lap of about 15.6 seconds. In Australia's excellent Team Pursuit squad at London 2012, which won the Olympic silver medal, Bobridge would have been well used to covering a 250m lap in 14.5 seconds or occasionally less.

These guys can usually gauge a lap to within 0.10sec, it's basically what they do for a living, but the Hour is such a crushing mental challenge as well as physical that Bobridge (pictured left in Tour of Britain action in 2012) made the most elementary mistake right from the off last Saturday.

With the home crowd shouting him on and the adrenalin pumping he put in two 16.3 laps to start, way too quick although it would have seemed effortless at the time. This is a guy who after all will occasionally dip under 14 seconds at the height of a world class Team Pursuit.

Realising his mistake – probably by watching his coach walking the line – Bobridge then over compensated and 'slowed' to 17.1 seconds which is still too quick but it was at least a move in the direction. That should have been followed by a further reduction to 17.4 seconds but instead, feeling brilliant and no doubt thinking that a truly memorable distance might be within his reach, Bobridge hit the accelerator again and reeled off sub 17 second laps all the way to the 10km mark. 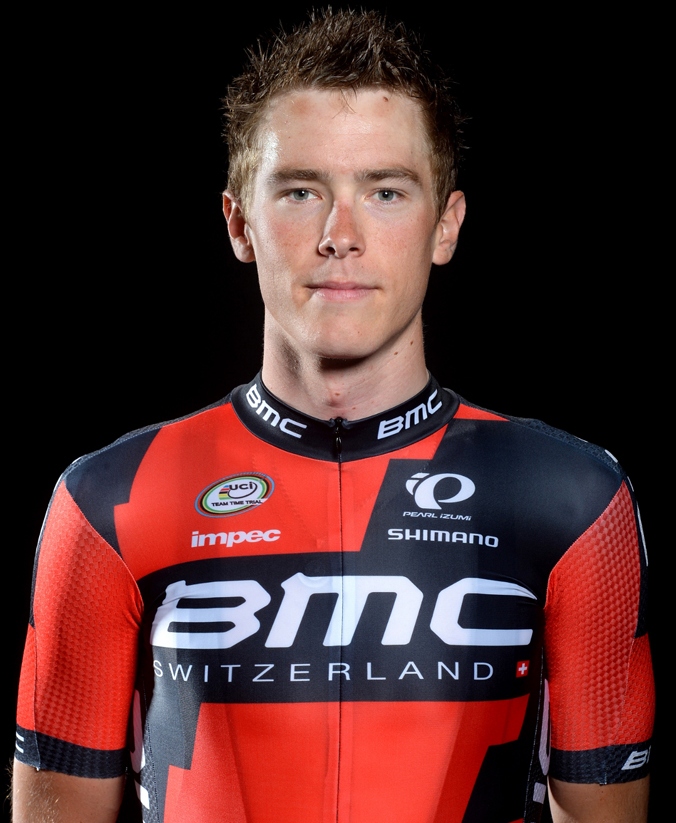 Indeed only at the 16km mark did he slow to the required to mid 17s and by then it was too late, the damage was done. Technically way up on world record schedule, Bobridge’s goose was in fact already cooked. Thereafter it was an agonising fight to the line – it’s a longtime since we have seen a rider so distressed at the end of his effort – as he fought the inevitable. Lap times started heading to 18 seconds beyond, followed by wonderfully brave attempts to recover the situation with a quicker lap which only accentuated the problem.

Ultimately it was a notable  effort to reach 51.3 kilometres, 552m short of Mathias Brandle's existing mart and fellow Aussie Rohan Dennis (pictured right), who launches his attempt at the Velodrome Suisse track this Sunday, will have taken careful note. With his extra road endurance Dennis to my mind was always the most likely of the Aussies to set an outstanding world mark but I can guarantee you one thing. He won't be knocking out 16.5 laps first thing on Sunday!

LIZZIE ARMITSTEAD used to be a considerable track rider in her day – a Gold medal winner in the Women’s Team Pursuit at the Worlds in 2009 and a medal winner in the Scratch and Points – and there was a time she might have stuck with that branch of the sport. You fancy she would still make a very competitive Omnium rider.
But road is her first love and that’s where she has subsequently concentrated her efforts and last year that paid off with a World Cup series win and a Gold medal in the Commonwealth Games road race. As she gets this season underway she is looking to get some of that top end track speed back to further her road career.

“I was delighted with how last season went generally, to win the World Cup series was an honour even if I didn’t particularly target it and the Commonwealth Games road race in Glasgow  was always a big goal,” says Armitstead.  “From week to week I was really consistent and I enjoyed a lot of podium finishes and a few nice wins like Omloop van het Hageland but if I was being hyper critical I'd say I need to convert more of those podiums into actual victories. “We had a good debrief on that and I've been putting in quite a lot of work this winter on my sprint finish. With my track background perhaps subconsciously I had started to take my speed for granted when in fact it always needs working on along with the tactics of a bunch sprint. So we've been trying one or two things in training and we will see soon if they make any difference.

“As for this season much as I enjoy the World Cup series I would give all that up for a victory in the Tour of Flanders, that's the race I really want in 2015. I came second last year and desperately want to go one better than that. The Worlds in the USA?  We will see. It seems like a criterium course but has a couple of tough drags so it might produce the smaller selection that suits me.”

Armitstead, Silver medallist at the London 2012 Olympic road race,  definitely has good reason to be enthusiastic about the Rio 2016 road race circuit, details of which have now emerged, There are a couple of proper climbs on the circuit and even some cobbled sections which will help make the one day specialists feel at home.

“I intend to have a good recce later this year although the Test event weekend in August doesn't fall at a good time so it will have to be some other time, perhaps after the Worlds in September. It doesn’t pay to look too far ahead in cycling what with form, fitness and injuries but my  first impression is pretty positive. It seems like a course I could go well on although of course it will also favour a number of other riders.

“On paper it seems a well-balanced circuit and I would certainly hope to be very competitive but there is a lot of water to flow under the bridge before then.”

Indeed, but water that is already flowing in the right direction with victory on Thursday in the third stage of the Ladies Tour of Qatar, to put Armitstead into the race lead with a stage to go.

As winter really takes a grip let's not forget Steve Abraham who is attempting to break Tommy Godwin's remarkable world record of 75,065 miles ridden in a year which dates back to 1939. That's a daily average of 205 miles to save you reaching for your calculators. Steve, who bases many of his rides from his home in Milton Keynes, has made an absolutely flying start, in fact let's hope he hasn't done a Jack Bobridge and set off too quickly!

When last I looked Steve (Thursday morning) Steve had logged 6,501 miles since January 1st which puts him over 1,000 miles up on Tommy at the same stage. This is a marathon though not a sprint as the best part of another 11 months of cycling lie in prospect for Steve with the possibilities of illness and injury always in the back of his mind.  The sheer effort of it all in this weather though is mind boggling. On Monday this week for example he knocked off 186.7 miles in just over 12 hours, a ride that included 6,476 feet of climbing and saw him burn off 5,791 categories. That came after, it should be added,  a 12 hour ride of 188 miles the previous day, which had also seen over 6,000 feet of climbing. On Wednesday, with the weather at its worst, he put in a massive effort and clocked up 200.4 miles during a marathon day of well over 13 hours on the bike. And so on. This is seriously inspiring stuff

If you want to keep track of Steve's progress and find out more, head to his website here. Good luck to Steve from everyone at SweetSpot!