Ahead of the World Track Championships, which start in Paris this week, Brendan Gallagher prepares a special Mixed Terrain focusing on the event and the Great Britain team.

Ahead of the World Track Championships, which start in Paris this week, Brendan Gallagher prepares a special Mixed Terrain focusing on the event and the Great Britain team.

Lots of attention will focus on the track World Championships this week in Paris, the halfway point in the Olympic cycle which is often considered an important staging post. Or is it? Just how much importance should we read into what happens at the French National Velodrome at Saint Quentin-en-Yvelines.

Take the 2006 World Championships in Bordeaux for example, two years out from the ‘Great haul of China’ when GB took seven of the ten track Gold medals available at the Beijing Olympics. To be perfectly honest Bordeaux wasn't cracking for the British team, in fact they finished fifth in the medal table behind the Netherlands, France, Germany and Belarus with just one Gold from Chris Hoy. And that came in the 1km Time-Trial which was just about to be cut from the Olympic programme. As a guide to Beijing 2008, Bordeaux 2006 was nigh on useless

There were excuses for Great Britain’s disappointing showing, notably that many of those riding had been down in Australia less than a month earlier at the 2006 Commonwealth Games in Melbourne and peaking twice in such quick succession is a notoriously difficult ask. And if you examine the results in detail, rummage through the Tissot timing splits – there are just a few pointers for future success.

A young Geraint Thomas went well in a GB Team Pursuit squad that took silver behind the Aussies, the Men’s Team Sprint took a solid Silver medal behind the French and Vicky Pendleton also finished runner up in the women’s Sprint.

In 2010 we all trooped off to Bellarup which is somewhere in the suburbs of Copenhagen – the bus seemed to take a different route every day! This time I thought the results much more encouraging although given Great Britain's dominance of the sport by this stage they were perceived in many quarters as being disappointing such was the weight of public expectation.

GB claimed three Golds and nine medals in total, eight of them in Olympic disciplines. After serious injury problems Chris Hoy proved beyond doubt that he had the capability of challenging again in London when he won the Keirin, Ed Clancy took Gold in the Omnium and Pendleton looked in imperious form en route to winning the Women’s sprint. A men's Team Pursuit squad now including Clancy, Steven Burke, Ben Swift and Andy Tennant finished second against a crack Aussie outfit but a time of 3.55.806 suggested good times were just around the corner, both metaphorically and in fact.

Interestingly that World's was just about the only occasion I can ever remember a GB Women’s Team Pursuit squad not winning Gold at a major meeting and although it was a shock it clearly galvanised the coaches and riders. Before long two youngsters – Laura Trott and Dani King – were introduced to the squad and the test was hysteria as they say.

So although winning Gold is a very good habit to form I would also be looking to read between the lines a little in Paris this week. Two years is still a long time in elite sport. Young guns can come from nowhere and fearlessly take the sport by storm while established stars can fall off dramatically if age catches up with them and fitness and form fails.

Having said that the GB coaches, headed up by Shane Sutton, will definitely be looking for signs of a revival from their Men who failed to garner a single medal in Cali 12 months ago. They need to get some runs on the board!

As ever the Men's sprint is a mystery for GB but experience has taught me to never give up on them. At the last two Olympics they seemingly conjured Gold form almost nowhere, waiting until the last minute to get the chemistry right. The raw materials are normally there with GB, it’s just getting the mix absolutely right, lighting the touchpaper and standing back. I love this event for precisely those reasons. It's explosive and unpredictable. Anything can happen and the form book is not a reliable guide.

With Philip Hindes starting and capable of sub 17.4 second laps and with Jason Kenny on lap two you would think GB should always be in contention and that either Callum Skinner or Kian Emadi, who is back in the groove after back surgery, should bring the team home in a lightning quick time. So far, apart from an outstanding World Cup Gold medal in Mexico a while back when Hindes, Kenny and Skinner took Gold, it hasn't happened with any regularity.

Hindes needs to work on his consistency – he can go very quickly but is sometimes sluggish by the highest standards – and there is always room for improvement at the transitions when getting that slingshot into the next lap is a priority.  The man ending his lap needs to finished strongly, not to ‘die’ in the final 30-40m

It's such a fine balance though.  If Hindes nails it and Kenny produces the fastest second lap in the world – which he regularly does – it is then a hellish job for whoever rides man three to hang onto to that extreme pace for 500m before bringing the trio home over the last 250. It requires a lot of experience as well as talent to cope with that pace and still have something left for the final effort and that is what Skinner and Emadi are grappling with at present. Even Sir Chris Hoy didn't crack it overnight

In the Individual Sprint and Keirin Kenny is still GB’s main hope and I get the impression he is simmering quite nicely. Kenny is the ultimate big competition rider and personally I wouldn't be too worried if he went all the way to Rio 2016 without nailing a big Gold medal as long as he is in the ballpark. Which he is. Kenny took silver at the Mexico World Cup meeting and seems well motivated to me and taking on the French in France will bring out his competitive juices. 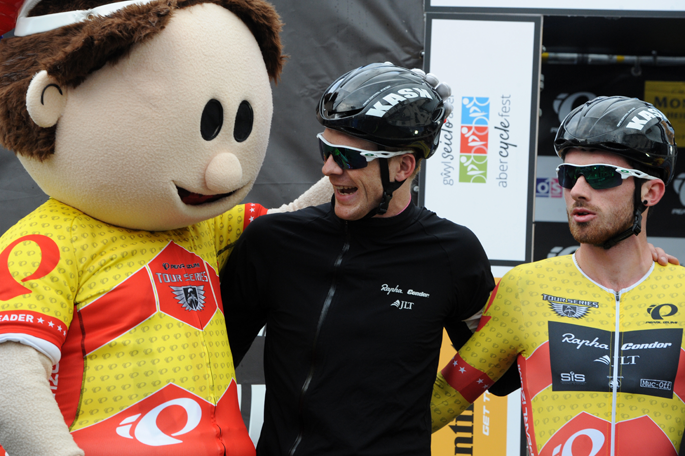 The Men’s Endurance squad is work in progress but again I have learnt to trust in their ability to peak every four years. There has to be a period of downtime and this time around Ed Clancy (pictured right, centre, with mascot ToBi during the 2014 Pearl Izumi Tour Series) for one has particularly needed that before he feels ready for the long hard road to Rio. The repetitive training required to knock out a 3.52 Team Pursuit is absolutely mind boggling.

And of course since 2012 there has been all sorts of rumours about big name road riders returning to the fray. Brad Wiggins is committed to the track programme after tidying up his road career and his Hour attempt this summer while I still wonder if Geraint Thomas or Peter Kennaugh might yet be tempted again?

Anyway  for this year Clancy, Steven Burke, who is going well despite breaking a collar bone during winter training in Majorca, and Andy Tennant are the most experienced team members with Mark Christian and Owain Doull the younger riders looking to claim one of the other starting spot and stake their claim. I wouldn't expect Gold from them this week but GB will be looking for a 3.56 or possibly quicker to confirm that they are heading in the right direction again.

In the women’s sprint the situation was always going to be pretty fluid after the retirement of Pendleton after 2012 with the situation complicated by Becky James' long absence through injury just after she had broken through to true world class with her two individual gold medals at the World Championships in Minsk two years ago.

Jess Varnish is now the mainstay of the sprint squad with Victoria Williamson and former heptathlete Katy Marchant completing the squad in Paris, Marchant just pipping Dani Khan for that final team position. Objectively I wouldn't be tipping medals in any of the events but the GB girls need to be ultra competitive they do as they look to find another level

In the women’s Team Pursuit Great Britain continue to set the benchmark and although others are working overtime to narrow the gap they are still out there on their own.

Last year saw a radical change in the event with four girls now required to ride and the distance upped from 3km to 4km and the British squad is evolving to take account of that. Joanna Rowsell and Laura Trott are still the mainstays but to that duo must be added Elinor Barker who has ridden every round of every World Cup and World Championship since 2012. 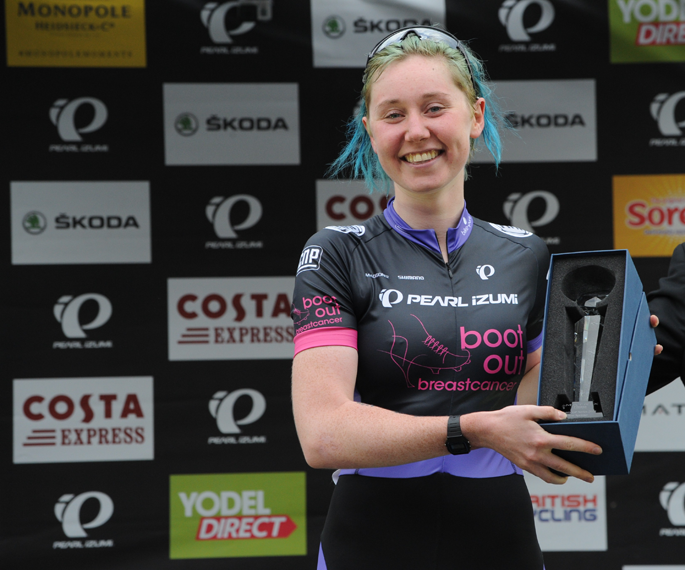 The slight Welsh girl is 'nails' – as tough as they come – and probably GB’s major track 'discovery' since 2012 although pushing her hard would be Scotland's Katie Archibald (pictured left) another outstanding young rider.  Completing the squad is Wales' Ciara Horne, a strong rider who had filled in seamlessly after Dani King opted to concentrate on the road this season.

Trott of course will also be riding in the Omnium and renewing her rivalry with the USA's  Sarah Hammer who took the Gold medal in Cali last year.  Still only 22, Trott has embraced the new Omnium format, which places greater emphasis on the Points race, which to a certain extent has always been her one weakness.

Working with former Points Race World Champion Chris Newton, Trott has turned the corner in her bunch racing, with a convincing home World Cup win in London. Watching her race and compete is always a treat, especially against such class riders as Hammer and Australia’s Annette Edmondson who also always comes into the equation.

The Great Britain team for the 2015 UCI Track Cycling World Championships is as follows:

Selected action will appear on the BBC as follows: