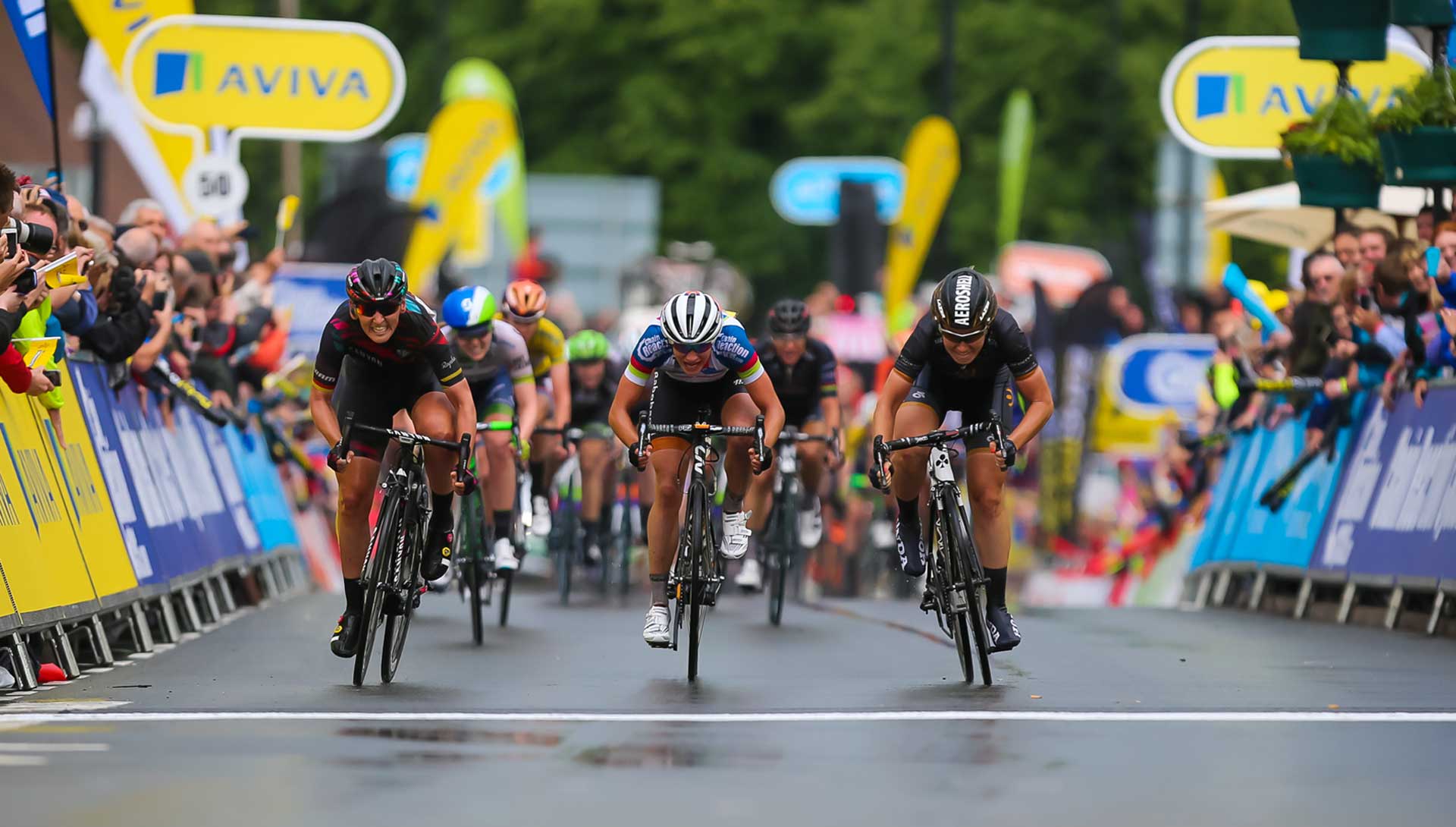 Marianne Vos returned to the Aviva Yellow Jersey, 26-months after she won the race, pulling on the leader’s jersey in Stratford-upon-Avon after her third placed finish behind Amy Pieters moved her into the overall lead.

Marianne Vos returned to the Aviva Yellow Jersey, 26-months after she won the race, pulling on the leader’s jersey in Stratford-upon-Avon after her third placed finish behind Amy Pieters moved her into the overall lead.

The Wiggle HIGH5 rider sprinted to victory in the centre of Stratford at the end of a 140-kilometre stage through Warwickshire, heading home a 27-rider group soaked by heavy rain showers throughout the stage.

“It was a hard day, a lot of rain and some quite steep hills. We did a really good job with the team, we have such a strong team here this week so we can play a lot of cards and I’m really glad that I could finish it today,” said Pieters following the stage.

“We want to win always it’s the most important thing, and we are so strong with our team …we stayed calm and raced well and we got it so I hope we can have more wins this week.” Marianne Vos now holds a three-second lead over Majerus, with Pieters a further four seconds back after commissaires overnight annulled the time gaps from the Stage One finish on review of the final three kilometres, resetting the race going into the Warwickshire stage.

Looking ahead to the next two day’s stages, Vos said; “They look pretty tough, today was not as tough as the upcoming days but already we felt it in the legs a little bit, it was a long stage.  I think tomorrow it’s going to be even more aggressive.

“From tomorrow onwards the longer climbs come in, so I definitely think it can split up the field.”

The reigning Olympic Road Race Champion won the inaugural Women’s Tour in 2014, but missed last year’s edition through injury.  Questioned as to whether she can hold the Aviva Yellow Jersey, her reply was categoric.

“I have no idea!  Of course it’s nice to be in the yellow jersey, it gives some confidence and motivation for the next days, so I’ll definitely try but there are some good competitors in contention.

“To be here in such a top class field and in the jersey is of course a good feeling, but we’re only on the second day so I will take it day by day.”

Despite often inclement weather conditions the stage was another fast paced affair, with lots of attacking riding, no rider more so than Ale Cipollini’s Emilia Fahlin, who was twice away in moves off the front of the race, the second time alone. The Swede was caught on the first Strava Queen of the Mountains climb at Burton Dassett, with Amalie Dideriksen and Malgorzata Jasinska the next duo to stay away, building a gap of 50-seconds, which was steadily whittled down by the speeding bunch.

The pair were caught by the small lead group with less than 20-kilometres of racing remaining and despite a flurry of attacks on the run in, the leaders hit the final kilometre together, with Pieters pipping Brennauer by the narrowest of margins.

Marianne Vos also moves into the lead of the Chain Reaction Cycles Points classification, with a three-point lead over Majerus, who is then ten-points clear of Pieters.

Her compatriot Floortje Mackaij retains the Best Young Rider jersey presented by Stoke-on-Trent, European City of Sport 2016, but is equal on time with Danish champion Dideriksen and Brit Molly Weaver, the trio 1-minute 03-seconds up on the fourth placed young rider.

Highlights of Stage Two will be shown on ITV4 at 21:00 on Thursday 16 June, with a repeat on Friday afternoon at 12:35.  The programme will also be available on demand via the ITV Hub catch-up service for 30-days.

Stage Three sees the Aviva Women’s Tour head to Derbyshire and into the Peak District National Park, heading from Ashbourne to Chesterfield and including the mid-stage climb of Bank Road in Matlock, which later this year will play host to the National Hill Climb Championships.