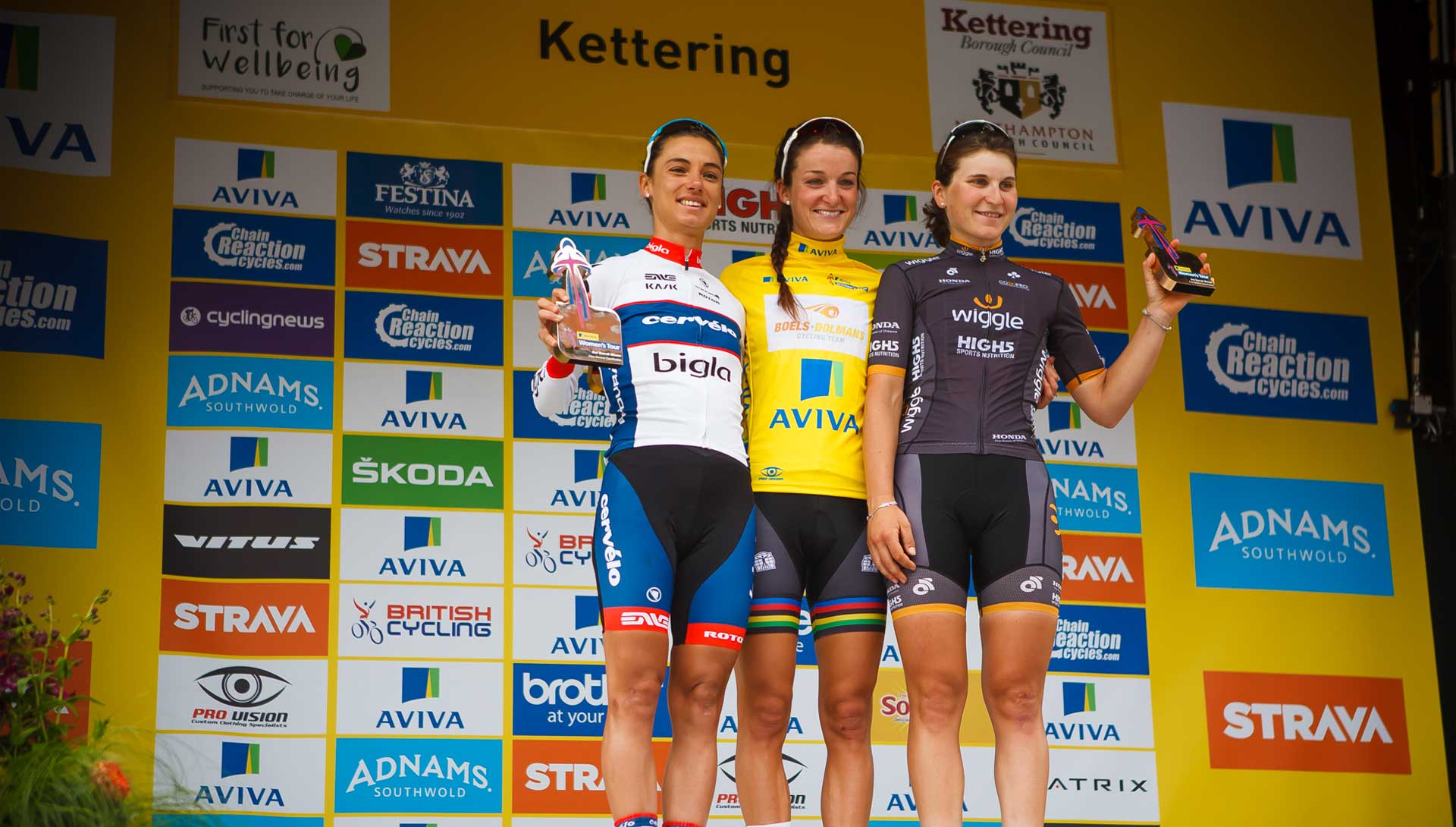 Lizzie Armitstead clinched overall victory in the 2016 Aviva Women’s Tour, finishing safely in the bunch in 14th position at the end of the 113-kilometre Northamptonshire stage as Finland’s Lotta Lepisto took the final stage win in Kettering from a group of seven riders.

Lizzie Armitstead clinched overall victory in the 2016 Aviva Women’s Tour, finishing safely in the bunch in 14th position at the end of the 113-kilometre Northamptonshire stage as Finland’s Lotta Lepisto took the final stage win in Kettering from a group of seven riders.

The victory will also move Armitstead up to second in the standings of the UCI Women’s WorldTour, behind her teammate Megan Guarnier.

“It means what a fantastic team performance it’s been” said Armitstead, “We had quite a lot of pressure on us today with the team performing so well all week I couldn’t let them down really so I’ve relieved and happy that I did it for them.

With the break of seven at one stage having in excess of four minutes, Armitstead admitted some nerves, but once again took the opportunity to praise her team.

“Probably from me, but not from the girls around me, they kept a cool head and Chantal [Blaak] said ‘We can close that if we want to’.

“It was still hard, although probably one of the easier days of the tour so far which meant we could control it and bring it to a sprint which is what we wanted.

“Being a British athlete I feel so lucky to be a part of a country that loves cycling at the moment and I hope that that bubble continues.  My teammates say ‘Lizzie, why is it so popular here?’ and I don’t really know the answer, but events like this certainly help keep the ball rolling.” A day long breakaway of seven riders contested the finish, as the Boels Dolmans led bunch just misjudged their catch, coming into Kettering 15-seconds behind the group, which Lepistö led home.

The high-class group of seven, including Italian national champion Elena CecchinI and 2007 World Road Race Champion Marta Bastianelli, built a lead in excess of 4-minutes, but it was driven down by a combination of Boels Dolmans at the front of the peloton and an eventual lack of cooperation in the front group.

“Today was pretty hard so I went with the break today because my team mate was second in the overall we had to go in the move and finally that move went and we had a pretty big gap and it stayed in the final.

“I had all the time information in my ear from the manager and he said try to stay calm and sometimes I wasn’t allowed to work and just wait for Ashley but in the last 2k it was really close for the peloton to catch us, so then I was confident that I could win the sprint if the break stays

“We worked together this tour, we are really small team but I think we have the biggest hearts the whole week. We started with five and we lost one rider during the week and now the stage win and the second on GC, I think it’s pretty amazing.”

With Moolman-Pasio failing to score on the opening Strava Queen of the Mountains climb near Daventry, Katie Hall of UnitedHealthcare Pro Cycling secured the jersey.

“I love this race” said Hall speaking afterwards, “I think it is my favourite race of the year now. I’ve done all three editions of this race now so the first one was my first ever race in Europe and I just so was so overwhelmed I couldn’t manage to do anything in the bunch, and now I can get a jersey and so I’ve been reflecting on the growth I’ve had as a rider through these three editions.

“The first year I got nothing, last year I got it [Strava Queen of the Mountains jersey] for one day and this year I’ve kept it until the end so it’s good.”

Having won Stage Four on Saturday, Marianne Vos couldn’t reduce Armitstead’s lead any further and had to settle for the Chain Reaction Cycles Points Jersey after a remarkable run of consistent finishes, ending each stage in the top five, barring the final day’s tenth place.

Vos’ compatriot Floortje Mackaij saw her lead in the Best Young Rider Jersey presented by Stoke-on-Trent, European City of Sport reduced thanks to teammate Molly Weaver’s presence in the break, but not by enough for the white jersey to change shoulders.  The win in that classification also helps Mackaij in the season-long UCI Women’s WorldTour young rider classification, with her edging closer to current leader Katarzyna Niewiadoma.

For full results and standings from the Aviva Women’s Tour please click here.