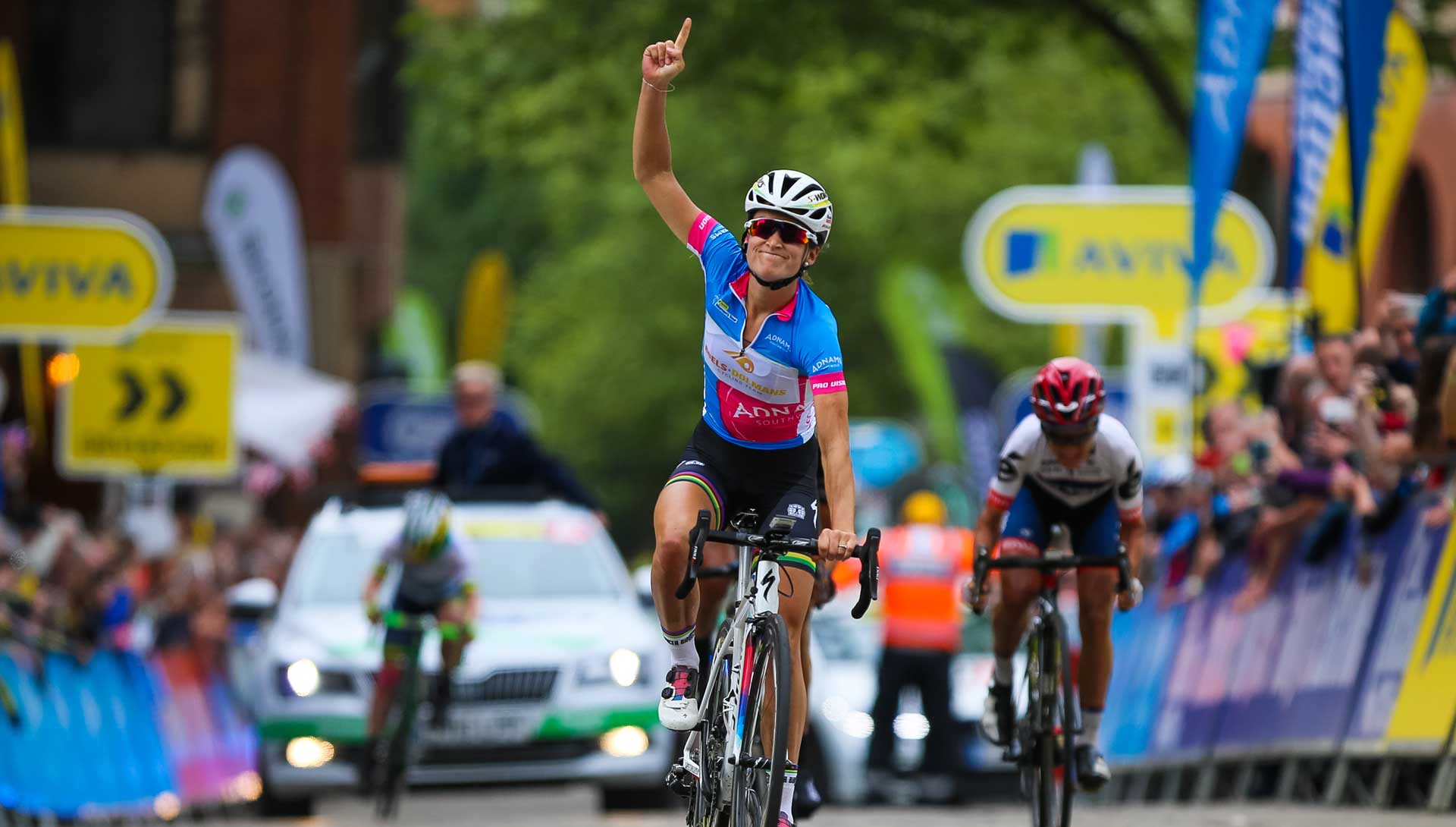 Lizzie Armitstead powered to an emotional victory in Chesterfield at the end of the third stage of the Aviva Women’s Tour, outsprinting a trio of breakaway companions to move into the Aviva Yellow Jersey of race leader with two stages remaining.

Lizzie Armitstead powered to an emotional victory in Chesterfield at the end of the third stage of the Aviva Women’s Tour, outsprinting a trio of breakaway companions to move into the Aviva Yellow Jersey of race leader with two stages remaining.

The reigning World Road Race Champion crossed the line pointing to the sky, dedicating her win in Derbyshire to the memory of Jo Cox, the Birstall MP who was murdered yesterday. Armitstead crossed the line clear of second placed Ashleigh Moolman-Pasio to now enjoy a five second lead over the Cervelo Bigla rider on the Aviva General Classification, with overnight leader Marianne Vos leading the bunch in for fifth, 36-seconds down.

The Boels Dolmans rider had led Moolman-Pasio and Wiggle HIGH5’s Elisa Longo Borghini across to the day’s breakaway group, catching the group of 11-riders shortly after the Strava Queen of the Mountains climb of Bank Road in Matlock.

Those eleven, who went clear after the feed zone and around 47-kilometres of racing, included the likes of Hannah Barnes, Chantal Blaak and Australian national champion Amanda Spratt, who went on to finish fourth.

While the break were working well together, they were powerless to stop the pursuit of Armitstead, Moolman-Pasio and Longo Borghini, with the trio making the junction after the summit of Bank Road having gone clear on the flatter valley roads following the Chain Reaction Cycles Sprint at Darley Dale.

Having missed the move, Vos and her Rabo Liv team chased hard, but with around 15-kilometres to go Armitstead attacked again, at first joined by just Moolman-Pasio before Longo Borghini and Spratt also made the junction.

The quartet worked well to hold off the chasing Rabo Liv, whose pursuit saw the remnants of the breakaway caught, allowing them to contest the finish in Chesterfield’s Market Place, with Armitstead leading out the sprint to take victory, her second ever stage win in the Aviva Women’ Tour.

In addition to the Aviva Yellow Jersey and a five second lead overall, Armitstead also retained the Adnams Best British Rider Jersey, with Dani King her nearest challenger in that competition, 47-seconds back in 15th overall. Having been in the day’s 11-rider move, Katie Hall led the race across both Strava Queen of the Mountains climbs at Winster and Matlock to take a 14-point lead over Ilona Hoeksma.

Highlights of Stage Three will be shown on ITV4 at 23:00 on Friday 17 June, with a repeat on Saturday morning at 08:55.  The programme will also be available on demand via the ITV Hub catch-up service for 30-days.

Stage Four sees the penultimate stage of the Aviva Women’s Tour head from Nottingham to Stoke-on-Trent, which is celebrating its status as European City of Sport for 2016.  The stage departs from Nottingham’s Old Market Square passing via Swadlincote, Burton-upon-Trent and Uttoxeter before a run through the hills of the Staffordshire Moorlands to finish in Stoke-on-Trent city centre.