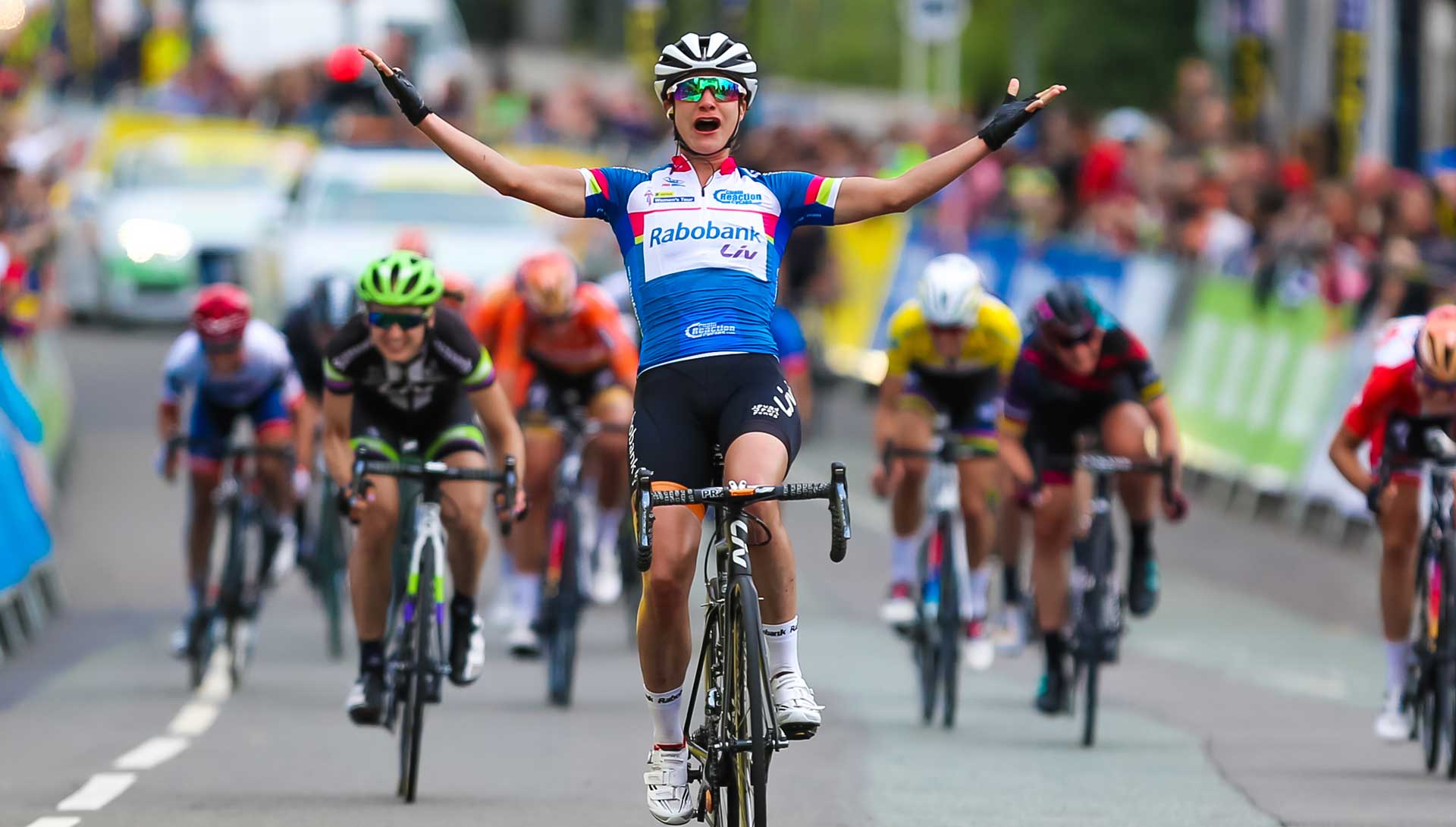 Lizzie Armitstead retained her Aviva Yellow Jersey heading into the final stage of the Aviva Women’s Tour as reigning Olympic Road Race Champion Marianne Vos took the Stage Four victory from Nottingham to Stoke-on-Trent, the European City of Sport for 2016.

Lizzie Armitstead retained her Aviva Yellow Jersey heading into the final stage of the Aviva Women’s Tour as reigning Olympic Road Race Champion Marianne Vos took the Stage Four victory from Nottingham to Stoke-on-Trent, the European City of Sport for 2016. In the process the Rabo Liv rider narrowed her gap to Armitstead on the overall classification to 15-seconds, although Armitstead’s nearest challenger, Ashleigh Moolman Pasio, slipped back to eight-seconds down in second overall, with Elisa Longo Borghini a further two seconds in arrears.

“We race as a team and we race aggressively, that’s always our tactic. From a team perspective we had a good race I had good legs again on the climb,” said Lizzie Armitstead after the stage.

“The race stayed together until the climb and then me, Ashley and Elisa went on the second Queen of the Mountains, Emma was in no-man’s land so she came back up to us and there was a bit of cooperation for maybe 5k and then Emma and Elisa started attacking

“In the final kilometres I could tell they [peloton] were coming back…coming into the final kilometre there were a couple of turns with up-hill flickers and again Emma and Elisa were attacking so it was just about covering them and as the group from behind pulled I tried to put myself in a good position but got caught out a little bit on the last corner.”

On the tough run through the Staffordshire Moorlands in the final third of the stage, Armitstead had again proved herself to be one of the toughest riders in the race, escaping in a four rider group that went clear on two back-to-back Strava Queen of the Mountains climbs at Ramshorn and Oakamoor.

In addition to the World Champion, her breakaway companions from Stage Three who lie second and third overall, Moolman Pasio and Longo Borghini, joined her along with Swedish national champion Emma Johansson.

The four struck out until just after the final kilometre marker, with Vos leading the chase to catch them on the final climb of Botteslow Street into Stoke-on-Trent city centre.  The winner of the 2014 Women’s Tour made the catch and then straight away led out the sprint through the final corner and into the short, uphill finish straight.

“We were riding full gas and we could see them but they were attacking each other so sometimes they were making really high speeds and sometimes it came closer and then the final kilometre was more up than I expected,” said Vos afterwards.

“On Google Maps it looked a wide road and nicely through some roundabouts but it went ‘boom’ uphill but they were still within 10-seconds, so I decided to just go because otherwise you don’t have a chance.

“I knew I had a chance in the sprint but if there are still four in the lead then you are sprinting for fifth and that wasn’t really in my plan today.” The stage win for Vos helped her to an unassailable 27-point lead in the Chain Reaction Cycles Points jersey, meaning she just has to finish the race to claim the jersey.

In the Best Young Rider jersey, presented by the city of Stoke-on-Trent in its year as European City of Sport, Floortje Mackaij extended her lead to 51-seconds over teammate Molly Weaver.

Stage Five of the Aviva Women’s Tour takes place in Northamptonshire, the third year that the race has visited the county, with the final day’s racing taking place over 113.2-kilometres between Northampton and Kettering.