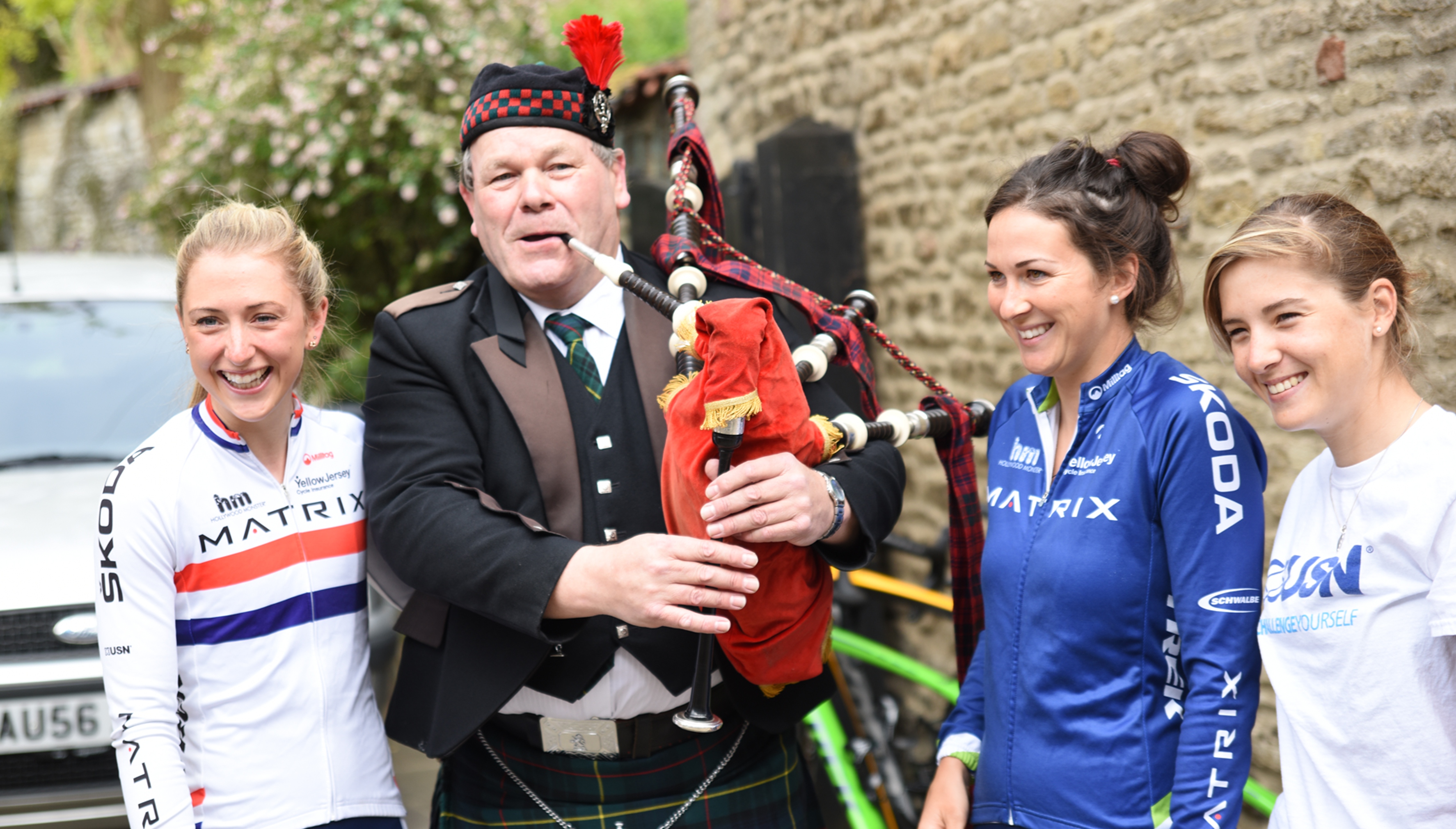 Double Olympic champion Laura Trott has had trains, gold letter boxes and leisure centres named after her but today in Oundle was a first when she was piped into action by a stirring marching song written in her honour.

Double Olympic champion Laura Trott has had trains, gold letter boxes and leisure centres named after her but today in Oundle was a first when she was piped into action by a stirring marching song written in her honour.

Pipe Major Martin Hewins, once of the Argyll and Sutherland Highlanders, now makes a living as a celebrity piper but as a huge fan of Trott decided to write a march in her honour and deliver it personally before the start of Stage Three of the Aviva Women's Tour.

As Trott headed off for the start he struck up with his juanty “Trotty on the march” which he composed earlier this week when he realised he would be able to travel to Oundle before his next engagement.

Hewins is the regular pipe on Rod Stewart gigs, has played for Lady Gaga, Paul Carrack and Status Quo and has been hired by Elkie Brooks for her tour later this summer. He is also a regular on the F1 circuit where he often appears at Dave Coulthard engagements and wrote and played the lament at the funeral of Scottish rally ace World Rally Champion Colin McRae.

“I'm a huge sports fan generally and started following the cycling a few years ago when Sir Chris Hoy started to make a name for himself,” says Hewins. “I first started watching Laura a few years ago, a couple of seasons before the 2012 Olympics, and it wouldn't be overstating the case to say Laura is my hero. “This young lady is completely down to earth, never complains no matter what has happened, doesn’t make excuses and is always smiling.  She is an incredible role model and not just for youngsters but all of us. Like the rest of the nation I thought she was one of the absolute stars of the Olympics.

“I've been lucky enough to get to meet and know well some pretty exceptional and inspirational figures and Laura is right up there at the top of the list. These special people are important in our society, you need them as role models and you need them to set the bar high for the rest of us.

“Although I'm from Wick I'm based down near Banbury for a lot of the time these days and when I saw the itinerary of the Women’s Tour there was just a chance of getting across for the Oundle start – I’ve got to get across for the Austrian Grand Prix for the weekend – so I sat down and wrote a march for her.

“I work initially on the chanter which the record part of the pipes if you like and the tune came very quickly. Hopefully she liked it. In my mind's eye I’ve got this fearless young warrior going into battle with a light heart but deadly serious intent.”

Laura should have the tune planted in her head by the end of the day. Hewins raced straight from the start to Blatherwycke Lake where he set himself up to pipe her and the rest of the peloton across the bridge mid-stage.