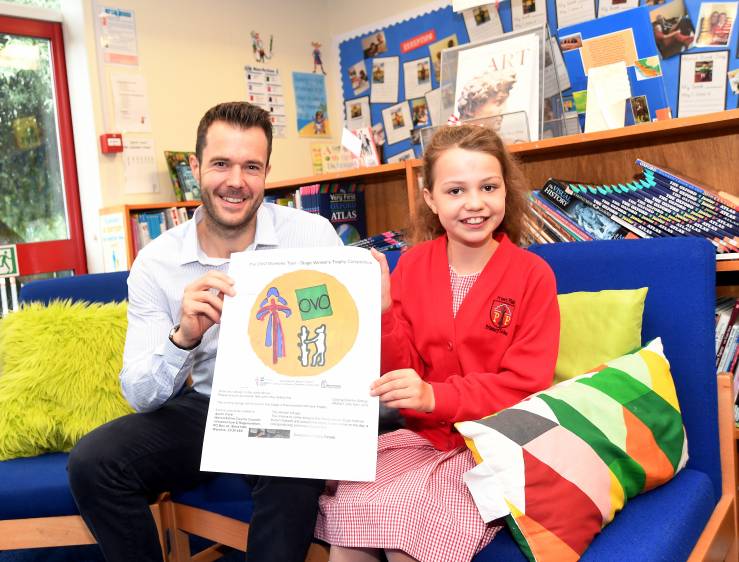 Pictured with Beatrice is her teacher John Marsh.

The winner of this year’s Warwickshire’s stage of the OVO Energy Women’s Tour will be presented with a trophy that has been designed by a creative Kenilworth youngster.

The winner of this year’s Warwickshire’s stage of the OVO Energy Women’s Tour will be presented with a trophy that has been designed by a creative Kenilworth youngster.

Beatrice Hurst has been named as the winner of Warwickshire County Council’s contest to design the winner’s trophy for the county’s stage of the OVO Energy Women’s Tour that takes place on Thursday 13 June.

The 10-year-old from Priors Field Primary School in Kenilworth took on the challenge after the competition was launched for all primary-school age children across the county to get involved.

Her gold design caught the eye of the judges and will now be created in time for the special event, which Warwickshire hosts for the fourth time in a row.  Previous stages have finished in Stratford-upon-Avon and Royal Leamington Spa, with this year the county hosting the first ever hill top finish for the race.

“I would like to say a huge congratulations to Beatrice for winning the competition.

“She has done a fantastic job with her design and I look forward to presenting the trophy, along with Beatrice, to the winner of the Warwickshire stage of the OVO Energy Women’s Tour.

“It is competitions like these that are a great way of getting youngsters involved with the event and generating excitement and enthusiasm for cycling in the younger generation.

“I look forward to seeing many young people out and about along the route for this year’s race.”

The 159km route will start in Warwick’s Market Place outside Shire Hall and will finish with a spectacular hill climb to the summit of Warwickshire at Burton Dassett Country Park.

The 159km includes a 12.5km loop of Burton Dassett which will see the cyclists go through the finishing line three times.  Fans coming to Burton Dassett are advised that there is very little parking on or near the final climb and road closures will be in place, so why not walk or cycle to the finish from nearby Gaydon, Fenny Compton or Avon Dassett.

Last year, more than 100,000 spectators lined local streets to see some of the world’s top female cyclists come together for the third stage of the Women’s Tour, topping 2017’s attendance.