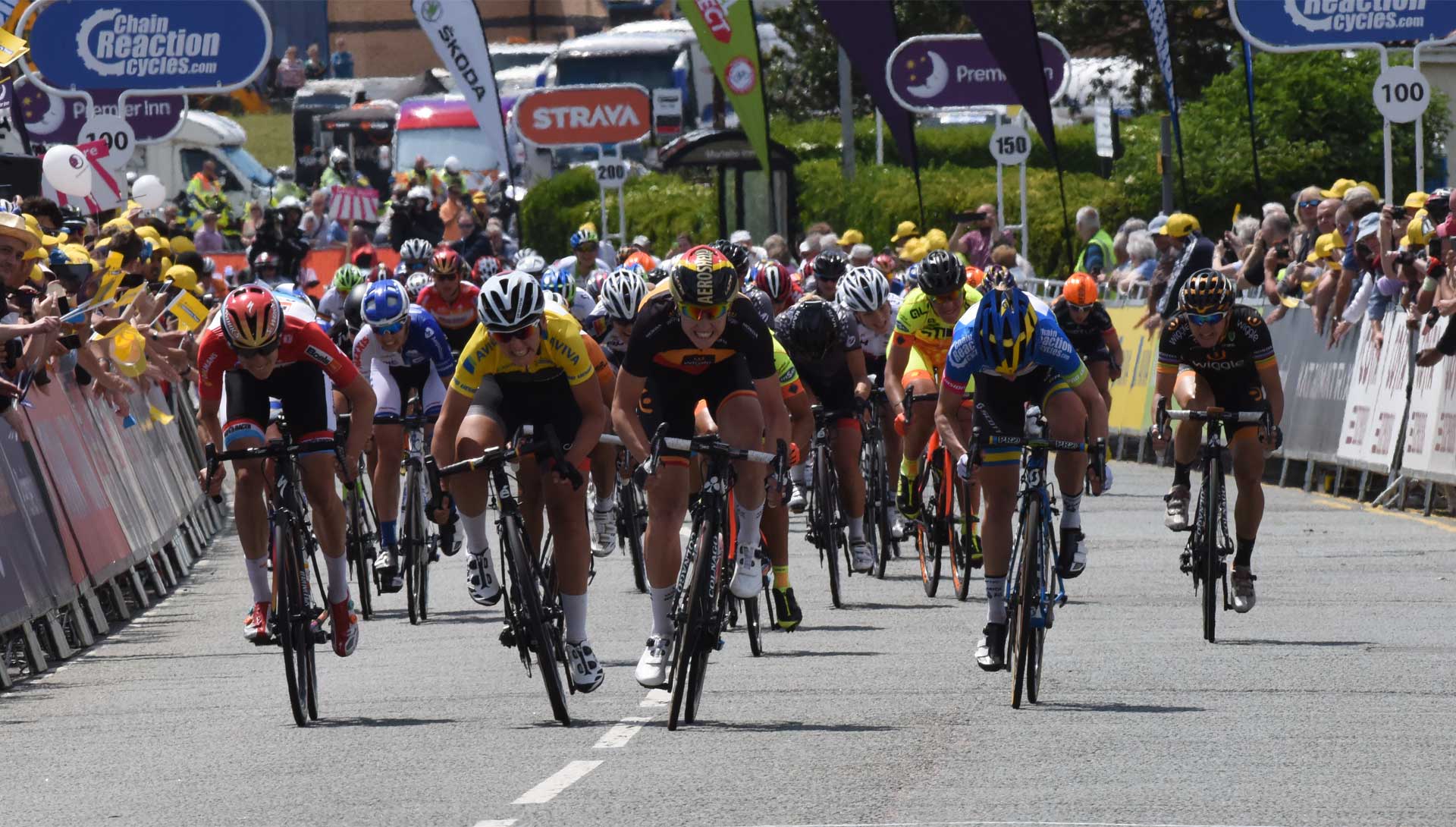 Wiggle HIGH5 Pro Cycling will start the third edition of the Aviva Women’s Tour on Wednesday with the riders that finished second overall in the first two editions. Swedish Champion Emma Johansson and Belgian Champion Jolien D’hoore also won a stage each, in 2014 and 2015 respectively and, Johansson especially, will be among the hot favourites for victory this time.

Wiggle HIGH5 Pro Cycling will start the third edition of the Aviva Women’s Tour on Wednesday with the riders that finished second overall in the first two editions. Swedish Champion Emma Johansson and Belgian Champion Jolien D’hoore also won a stage each, in 2014 and 2015 respectively and, Johansson especially, will be among the hot favourites for victory this time.

“I’m always excited about the Aviva Women’s Tour!” Johansson (pictured heading to victory in Northampton in 2014) said. “I loved it from the first moment and the crowds just makes it that little extra!” 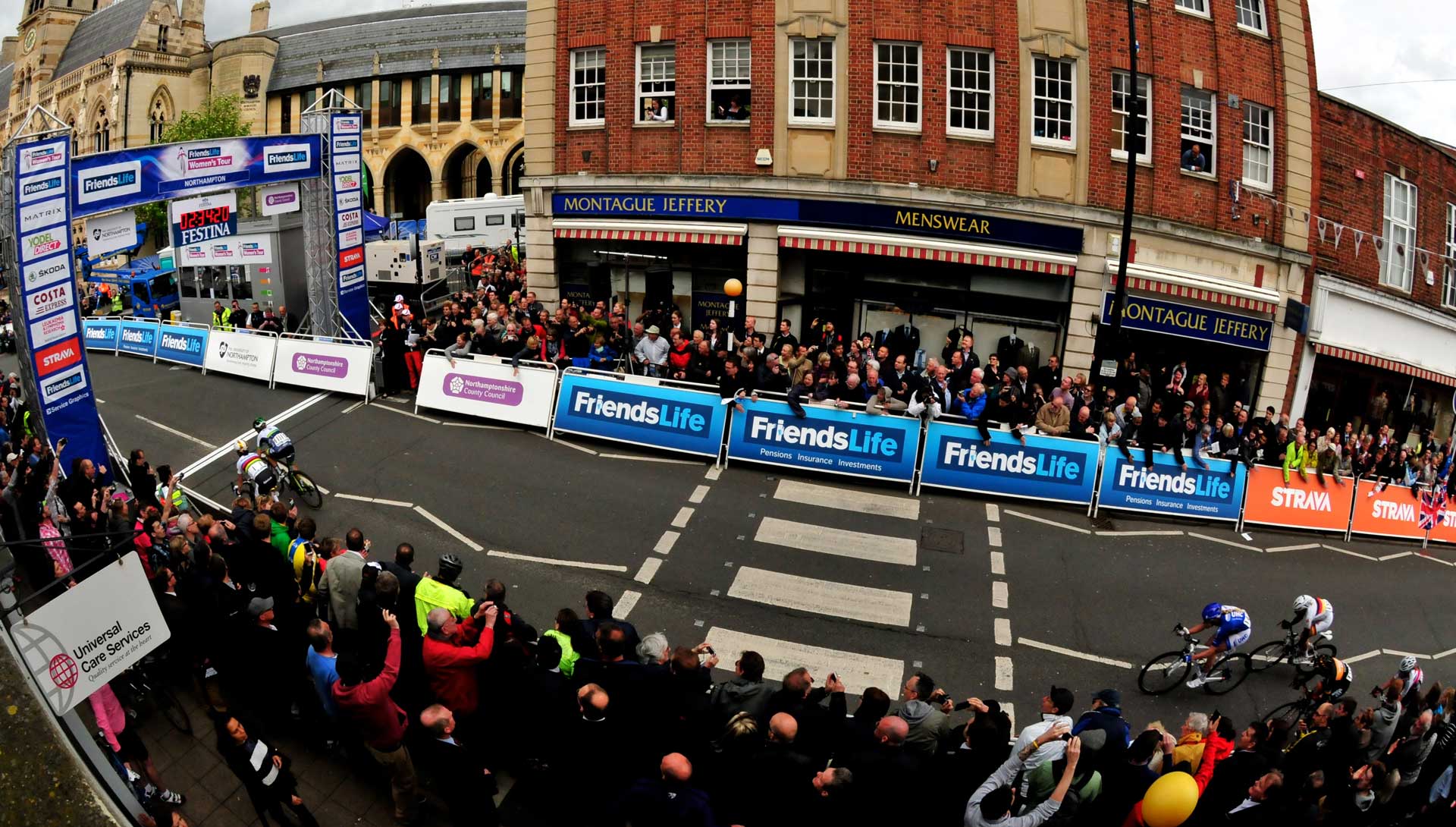 With the five-day race’s course moving westwards into some of the hillier parts of the British Midlands, the 2016 edition of the Aviva Women’s Tour will offer different challenges than the previous editions that were based around the flatter, eastern side of the country. While D’hoore is not expected to be challenging for the final general classification, as she did last year, Johansson’s prowess in hillier stage races – including her third victory in the Euskal Emakumeen Bira in April – makes the Swedish Champion well suited for this year’s edition.

“That the course is a bit changed and made harder might make it a totally different type of race than the last editions but we will have to wait and see,” Johansson explained. “Our team is very strong and we have a rider for all different types of courses and finals so I really look forward to this week of racing!”

While much of this year’s race will be over hillier terrain than before, D’hoore’s victory in Sunday’s Flanders Diamond Tour shows that the Belgian Champion will be among the favourites for any stages ending in sprints. D’hoore will be accompanied by former two-time road World Champion Giorgia Bronzini – who replaces the sadly injured Lucy Garner – and Amy Pieters, who was instrumental in D’hoore’s lead out on Sunday.

“I’m looking forward to racing there once again,” D’hoore said. “I can’t compare it to last year… I can’t compare the course, and also myself! That’s the big difference, but I hope I can help the team.

“I heard that Aviva Women’s Tour is pretty hard this year, there’s a lot of climbing. We have good riders, so hopefully I can help them.”

Also expected to be one to watch in the general classification of this year’s race will be Wiggle HIGH5 Pro Cycling’s Elisa Longo Borghini, who returns to the Women’s WorldTour after her excellent second place in the Philadelphia Classic. The Italian was awarded the Most Aggressive Rider for the overall race last year, with her attack in the rain on the penultimate day into Stevenage almost netting her a stage victory.

The more challenging terrain of this year’s course could work in Longo Borghini’s favour, and make any of her characteristic attacks much harder to close down.

Completing the black and orange team will be Wiggle HIGH5 Pro Cycling’s Olympic Champion Dani King. The British rider’s complete transition to the road this year has proved spectacularly successful so far; her latest result of seventh place in Philadelphia coming even after she had shepherded teammate Longo Borghini to the foot of the final climb.