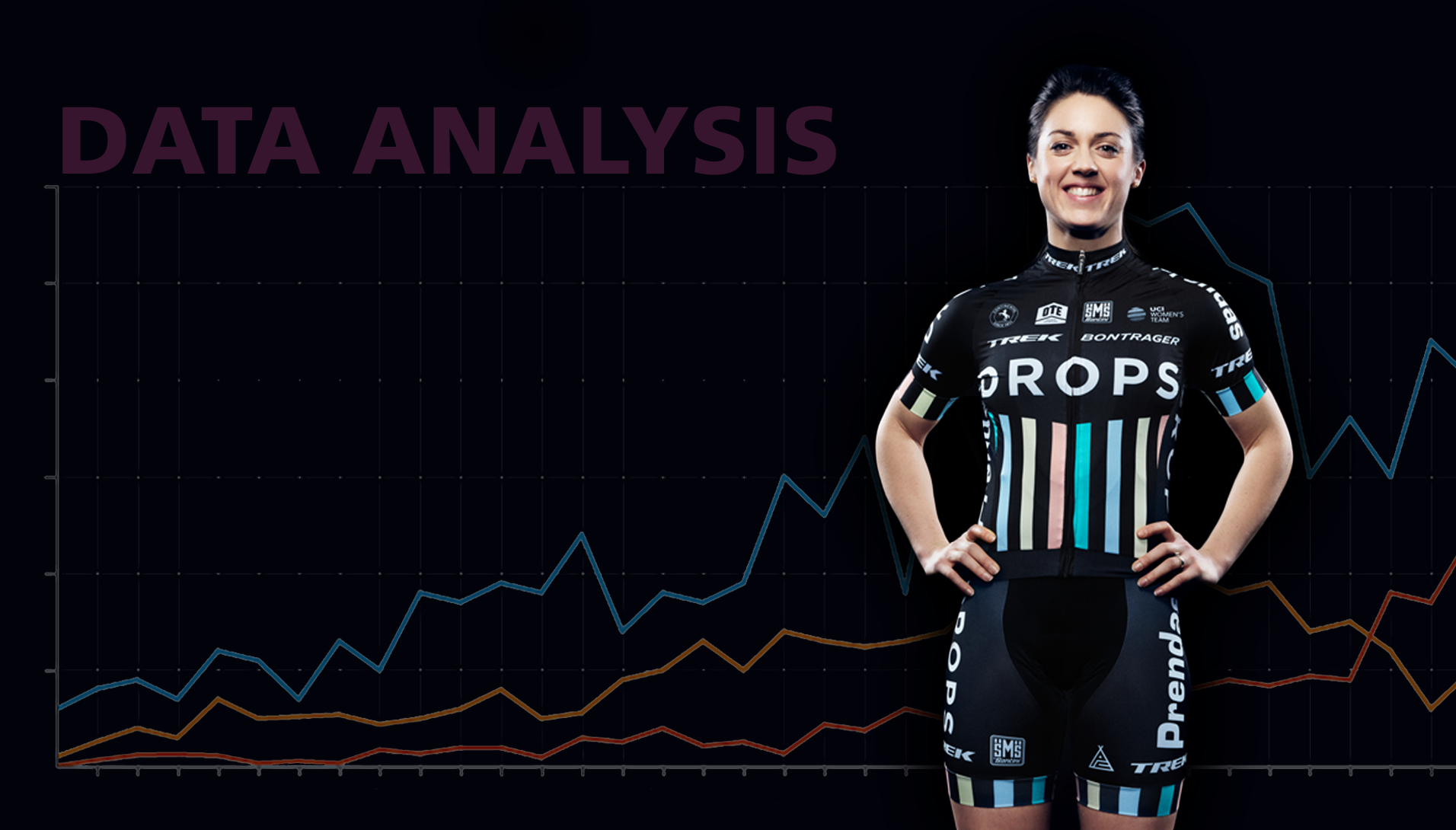 This week the Aviva Women’s Tour and Drops Cycling Team will be providing a behind the scenes insight into what it takes to ride a stage of the tour.

This week the Aviva Women’s Tour and Drops Cycling Team will be providing a behind the scenes insight into what it takes to ride a stage of the tour.

Using the data from Drops rider Rebecca Durrell, her coach Mark Young, will be pulling apart the numbers and graphs, providing us with a post-stage analysis of how Rebecca has performed on the day’s stage.

Below, Mark provides us with an introduction to data analysis, what you need to look for and most importantly a simplified view of what it all means!

Intro
My role as coach to Rebecca Durrell is to plan, track and review her activities for the purposes of producing cycling performance. In other words, I help her manage her resources to win bike races.

Key to this, is to try to understand the physical, technical and mental demands of the bike racing, so that Rebecca can prepare herself in the correct way.

We know that it takes a lot of skill to be able to ride in a very fast moving peloton and to descend at breakneck speeds on narrow roads; all on a very small bicycle with 25mm skinny tyres. Not to mention the mental energy required to be constantly paying attention to what's happening in a race, to respond to the other rider’s attacks and maneuvers.

But the biggest demand on Rebecca is from her physiology; the distance and speed that a bike race like the Aviva Women's Tour asks of her body is something, as her coach, I need to understand and somehow quantify.

There are multiple data mediums which can be recorded, including: speed, distance, metres climbed to name a few. However what's more key is to understand what is going on inside Rebecca's body and how she is using her energy systems.

Energy Systems
Propelling yourself on a bicycle, while highly efficient, still takes a lot of energy which the body must have stored and ready to be drawn upon when required.

Mother Nature has given us 3 distinct energy systems to tap into for all our daily needs.


What's important to note is that the three systems are all interlinked, like dimmers not switches. They are all being used to power our processes at some level or another; it's just when our movement requires different levels of speed a change in the volume of each one happens.

There are of course a few drawbacks to the production of all this energy, chief among them is the build up of acid or acidosis which is produced as a byproduct.

The AER system manages to removal of the acidosis very well, cleaning it up and pushing it back through. The ANL struggles to deal with the high amounts produced and so eventually the muscles grind to a halt and the ANA only has stored energy, so struggles with getting more energy back in fast enough.

So why am I going on about energy systems? Well, what Rebecca and I are trying to do in essence is make her three systems more capable of producing a bigger, longer squirt and to try to get fresh energy back in quicker, while lessening the damage from the nasty acid byproducts.

At the upcoming Aviva Women's Tour, I will be monitoring Rebecca's progress in a few key ways.

Communication with her will be vital to support her through the tough times ahead; she will be competing at the highest level and with this comes a whole host of challenges, not least the terrain, distance and weather, but also how her body is coping under the stress of the energy used to finish each stage.

To do this, I will of course have direct communication with her over the phone, but I will also be analysing some data from her Garmin, a GPS device attached to her handlebars, which will have recorded the day’s stage. Data Analysis
Number crunching can be a tedious affair and the old saying of paralysis by analysis is often used to describe how lots of coaches over play the data somewhat. It all has to be taken in context which is why I'm going to great lengths to help everyone understand that, while the data is important, it doesn't in itself win bike races!

So what will we be looking for in Rebecca’s data?

First of all, we can have a look at some graphics which like below, can help us to show the race in a picture. All the squiggly lines are data channels like speed, pedaling revs, height in metres etc. We can see patterns in the race and even spot when the attacks happened, the climbs, the descents, when Rebecca is working hard, or when she was doing as little as possible.

Remember those energy systems earlier? Well we can use some maths from the amount of power Rebecca was producing to show us how she is using her energy resources. After all, power is actually an equation from energy and time. We're going to use a sliding scale to help us score the use or efficiency of each of them.

TSS – Training Stress Score
Someone much cleverer than me has already put together a scoring system which is used by many coaches and riders. Developed by Dr Andy Coggan, the Training Stress Score in basic terms, the harder and longer you ride = the bigger your score. It's also based on your own personal ability.

A small test to determine your own level is necessary and if you were following earlier, the important starting point for the scoring is right at the top of the AER system, just where the ANL system begins to produce more acidosis than your body can remove i.e. things begin to hurt!

So if you rode for 1 hour right at AER/ANL cusp, then you would score 100 points.
The scoring is weighted such that any time you ride easy and steady, the points will be lower than if you were going absolutely flat out.

IF – Intensity Factor
Intensity Factor is a way of telling us about how hard the race was. Since the TSS can be made up of riding for a long time, then we need to find out how it was derived. So the IF tells us which system was being used for the stage.

That test from earlier also sets the IF, with 1hr at AER/ANL cusp being 1.0, meaning we also have a nice scale to help us understand the effects of each stage.


Heart Rate
The amount of times your heart beats every minute is a useful indication of how hard the blood is being pumped, since the blood is the transport fluid for the energy needed by the muscles, it is also used to tell us a little about performance.

It does have a lag between the asking and the answer in the supply chain, but it's still a great way of showing how much panting and puffing is going on! It's also worth noting in that it's similar to power, where it's totally individual to each person.

Calories
The power data gives us an idea how much energy was used during each stage, which helps Rebecca know whether she was eating enough to meet the calories consumed.

Average and Max power
These measurements are more simplistic in that they literally tell you how many light bulbs you could power up and keep running. The context being that a mobile phone takes 16w, a laptop uses about 35w and a TV about 90w. Max power of over 1000w is a pretty big number and would indicate that there was some serious sprinting effort going on.

The Aviva Women's Tour is over 5 days of racing and therefore its key for anyone wanting to do well that they use their resources at the right time. Tiredness and fatigue are the enemy of performance, so plotting the cumulative data over the whole race can be a very useful tool for the rider and their team in developing a race strategy. This is what Rebecca and I will be doing from Southwold to Kettering and we wish to share this with you as we go on the amazing journey of the Women's Tour.

Make sure you check back here after each stage to read about Rebecca's stage.

Mark Young is a British Cycling Level 3 Road, TT and Track Coach with more than 15 years experience. He previously worked at Scottish Cycling in Youth Development, Gold for Glasgow and Elite Programmes, and at British Cycling as a Talent Coach.