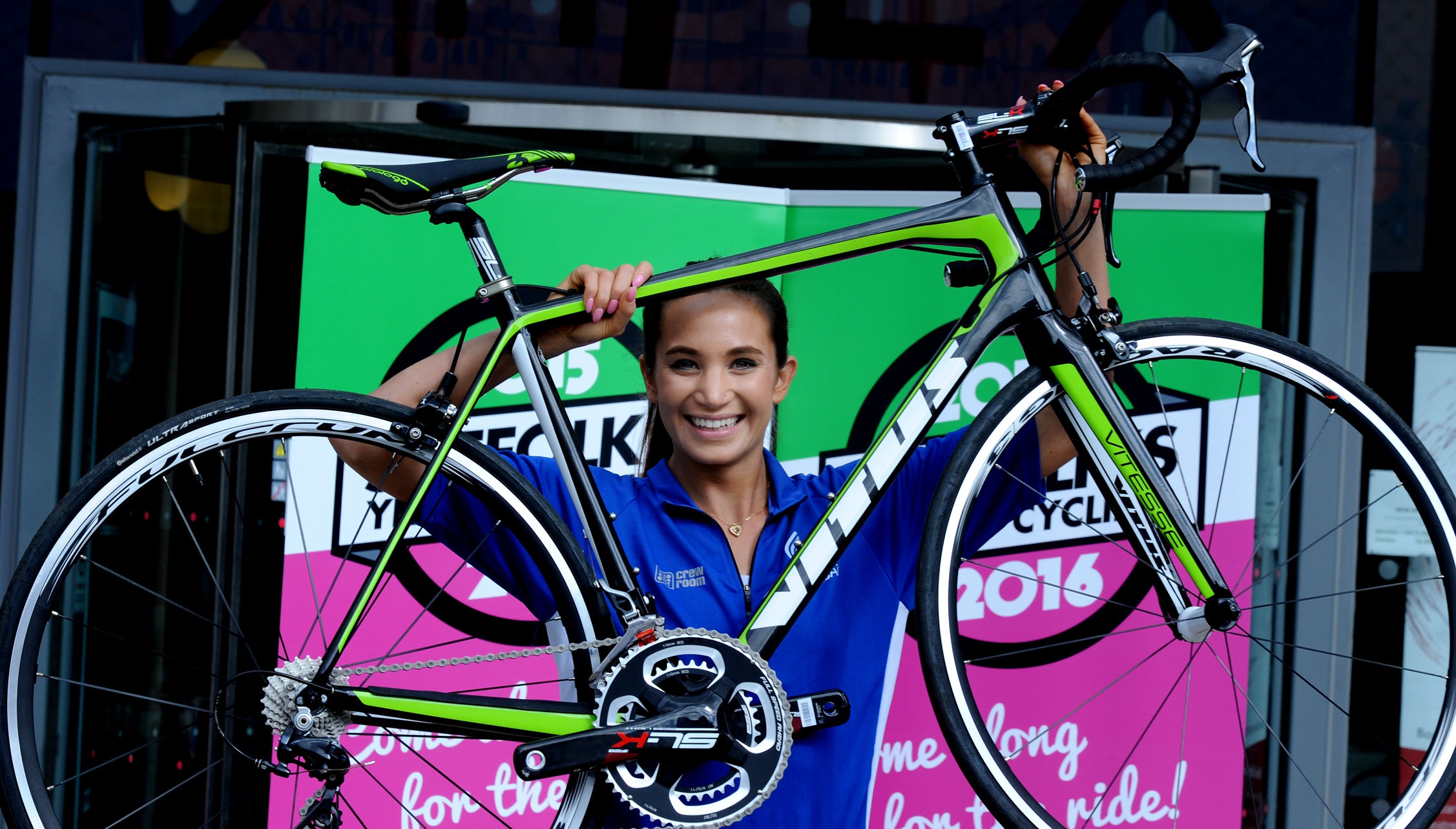 We are blessed in this country with an extraordinary array of sporting action – the Six Nations, an Ashes Series, the Aviva Womens Tour, the Rugby World Cup and regular season NFL games at Wembley – and the one constant in that all-star parade this year is Laura Wright.

We are blessed in this country with an extraordinary array of sporting action – the Six Nations, an Ashes Series, the Aviva Womens Tour, the Rugby World Cup and regular season NFL games at Wembley – and the one constant in that all-star parade this year is Laura Wright.

Wright has been the RFU's official anthem singer at Twickenham since 2012 and has been such a success in that role that she has been engaged by all manner of other sports. Her latest ‘gig’ will come the launch of the Aviva Women’s Tour on 16 June at Bury St Edmunds, just down the road from where she used to attend school at Framlingham College. In fact the entire first stage from Bury St Edmunds to Aldeburgh will be on roads she knows very well.

Laura will perform at the team presentation (details below) before taking on the challenge of riding the Stage One route in aid of SportsAid, for whom she is an ambassador. You can find out more about Laura's ride, which she will complete on a Vitus bike kindly donated by Chain Reaction Cycles, here.

Trained as a classical singer – she graduated with a first class honours degree from the Royal College of Music – Wright is also a sports nut who at various times has played county netball, tennis, hockey and ran for her county. On top of that she is also the regular full-back for the Rosslyn Park Slingbacks ladies rugby team and is a keen daily cyclist – for pleasure and to simply get around London – who completed a London-Paris challenge in 2011. “Cycling forms quite a big part of my regime these days,” says Wright. “You can hop on your bike at any time an sometimes it’s the best way of getting around town.  I've got a road bike and there is nothing I enjoy better than heading for a green part of town where it doesn't feel like London or heading for one of the parks perhaps with a bit of a picnic. I’ve also got a dog that needs exercising and comes along with me sometimes.

“I'm thinking of switching to a hybrid bike this year, they seem to give you more versatility in the parks and cycling on paths as well as road. In the gym a regular session on one of those Wattbikes where you can measure your fitness and hopefully your improvement and I can see myself getting even more into cycling in the coming years. It's so simple and the rewards health wise are massive. And then there is just the feel-good factor. There is nothing better on a nice day than just being on your bike feeling relatively fit.

“Women’s sport is on a massive surge right now and the Women’s Tour is one of the leading examples with that. And the great thing about that is not only has there been more support and excitement around women’s cycling – whether it be TV coverage or just audience numbers – but our talented women are now beginning to be given the opportunity to demonstrate their skills an ability. And that means we finally get to see and appreciate all these great athletes doing what they do best.

“When you are a performer you need a stage because that it what brings out the best in you. Look at how women’s football and rugby has recently blossomed in this country now that it has a stage and feels appreciated. Don't get me started on this, it's my pet subject.

“We are seeing brilliant role models come out of cycling – Laura Trott, Joanna Rowsell, Dani King, Sarah Storey and others. The public sees these great ladies and relates to them as individuals as well. They are all personalities with a story to tell. They are normal people but blessed with a great talent and determination and other women look on and say ‘Do you know what I'm going to try that.’ And when you get people trying to emulate the champions, that’s when the next generation comes through.

“For me sports and fitness is a big release and I love the teamwork part of it. When I sing those anthems I am usually out there on my own but by instinct I'm a team player. I enjoy being part of something bigger, less individual. Sport of course is really good fun as well. I'm quite competitive, I've always enjoyed the winning part, but increasingly it’s the fun element of sport and keeping fit that I'm enjoying these days 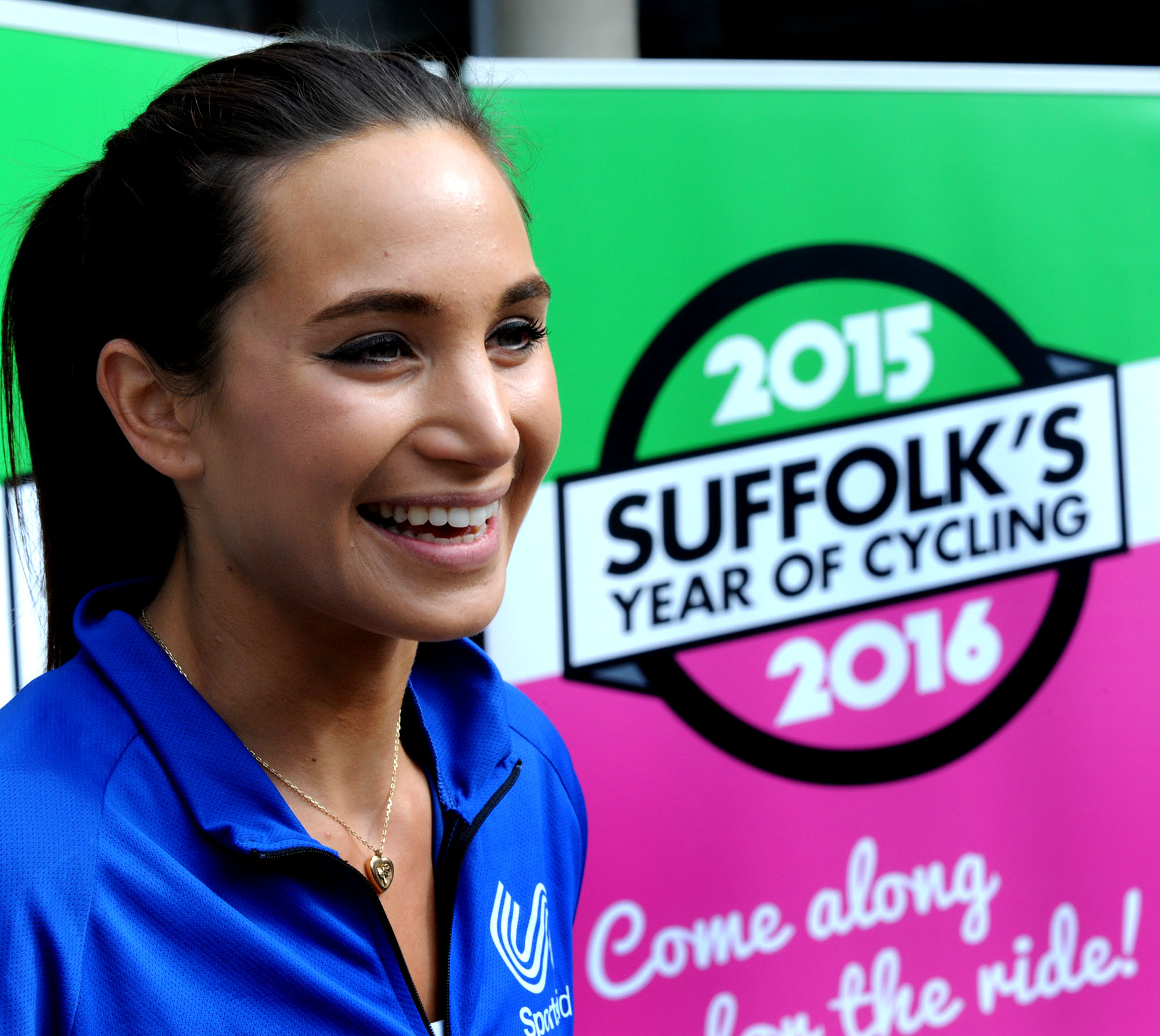 “Is being sporty good for my singing?  Getting your body fit for purpose to sing big auditoriums is different process and discipline – and you certainly don't have to be a fitness fanatic to sing to be a professional singer – but for me it certainly helps. I like to feel good about myself and look healthy for my own personal confidence as a woman and that confidence is a massive factor in being able to stand up there on your own and perform.

“General fitness has to be positive doesn't it? It's a lifestyle choice I would make whatever I was doing in my professional career.  As I've come into the public limelight a little I enjoy being a little bit of a role model showing young girls that there are no boundaries. Classical singer/rugby player might not seem an obvious fit but why not?  You can do anything you want if that's what you want to do.”

Wright's first taste of sports stadium singing came in 2009 when as a 19-year-old student and a member of the pop operatic trio All Angels she was asked to sing Abide with Me and My Way at Ipswich's home game against Newcastle which, shortly after the death of Sir Bobby Robson, became a tribute game to the former England manager who also coached both sides. That went well – “I was nervous, petrified and excited all at the same time” – and a couple of years later the RFU chose her as their official England anthem singer. They wanted a singer who was also a rugby enthusiast and a personality who could build a relationship with the crowd.

“Sport and music have a huge amount in common,” continues Wright. “They are both about having a passion and finding ways of expressing it. When I am standing in the tunnel, often with another incredible artist from the music industry, watching the team out there warming up we are going through very similar emotions. I will have butterflies in my stomach and obviously I don’t want to mess up but I'm also absolutely buzzing. I want to excel, I want to sing the best anthem I've ever sung, just as a player wants to produce his best ever game.”

As you would expect delivering the anthem to an 82,000 crowd in an outdoor environment in the middle of and English winter, with conditions varying from numbing frost and snow or heavy rain to unseasonal sunshine and heat, is not without its challenges and it can make for a long day as Wright explains

“For a 3pm kick-off I will usually get to Twickenham for about 10am, bright and early but not looking not terribly glamorous in my jeans and jacket. We need to get the sound checks done with lots of time to spare before the crowd starts arriving. After that's there's lot of down time to relax  and we hide ourselves away in a room the RFU put aside for us and I will start getting ready as kick off approaches. I will normally sing Jerusalem in the build-up as well as God Save our Gracious Queen and then as soon as I've done my stuff I will quickly wrap up or throw some warm clothes on and support England. “There's no avoiding the fact that it can be absolutely freezing out there in the middle of winter there have been times when I've been sitting on the touchline or standing in the tunnel with a couple of hot water bottles under my coat keeping warm just before going up to perform in my flimsy outfit or gown. When it comes to the actual singing the adrenalin kicks in and I am off in my own world but in all honesty it can be absolutely perishing before and after and you just have to grit your teeth and get on with it.

“In terms of the actual singing I’m lucky in that my voice doesn’t seem to have a problem with cold weather.  Every singer is different and I can struggle occasionally with my throat and voice with damp muggy weather which we can sometimes get when I sing in China where I have done a few engagements.

“When I am out there singing in the middle of an 80,000 crowd I have a small pair of headphones, that you won't be able to see, which block out a lot a fair bit of the noise. When I start singing I have to stay on that tempo and the tempo of the music, whether it be from a live band or through a sounds system.  I can't try to adjust it to the tempo of the crowd because if I go with the crowd we would all then be behind the music and it would be chaos.

“It can be quite difficult and takes a bit of getting used to especially when we do the anthems without any accompaniment, just the singers voice. When I sing on my own I have to take over and be the person setting the tempo and speed.  And you have to be confident in what you are doing because if you are caught out it becomes really obvious.

“An anthem is never about the singer though, you are just the medium. My sole aim is to make people proud and try and help players, supporters and fans capture and share a moment. All sorts of emotions and memories come to the surface if the anthem singer can get it right. There will be pride and patriotism,  players will be thinking of their love ones and perhaps the sacrifices they made, family and friends will be totally into the moment and every fan in the ground will have a private thought if the anthem can soar. It’s a wonderful communal thing, it helps set the tone and I always try to make sure I enjoy it myself as well.”

The team presentation for the Aviva Women's Tour takes place in Charter Square within the Arc shopping centre in Bury St Edmunds, outside the Apex theatre from 5.15pm on Tuesday 16 June. The event is free-to-attend with no ticket required.

Community activities will take place in Charter Square during the afternoon organised by St Edmundsbury Council, before the teams arrive for the presentation, which Laura Wright will open at 5.15pm.  The 16 professional teams will appear on stage one at a time from 5.30pm until 7pm.