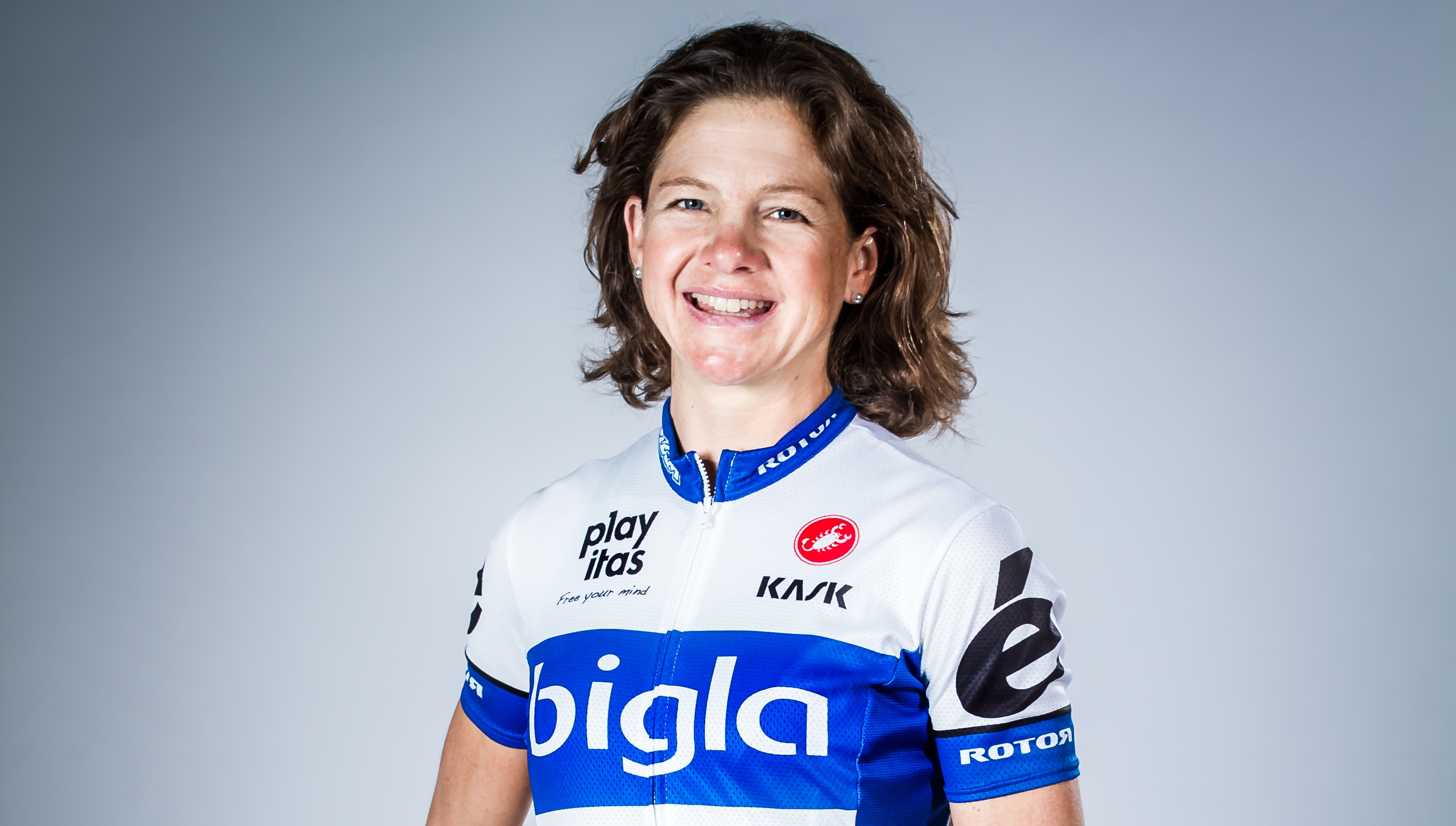 Following on from last week’s announcement of the Bigla Pro Cycling line-up for the Aviva Women’s Tour, Brendan Gallagher caught up with their star rider and defending Strava Queen of the Mountains Sharon Laws.

Following on from last week’s announcement of the Bigla Pro Cycling line-up for the Aviva Women’s Tour, Brendan Gallagher caught up with their star rider and defending Strava Queen of the Mountains Sharon Laws.

SHARON LAWS, who led the Strava Queen of the Mountains jersey competition from start to finish at the inaugural Aviva Women’s Tour, will be back to defend her jersey this year and flying the flag for, how shall we put it, the more experienced riders in the peloton

Laws worked as a highly respected environmental officer with Rio Tinto before turning professional in 2008 at the age of 33 and has relished the sporting life so much since that she is in no hurry to return to anything close to an office environment, though she has kept her hand in with consultancy work.

Despite more than a fair share of bad crashes she is still competing hard and particularly looking forward to returning to the Aviva Women’s Tour – she places last year’s event at the very top of her career highlights and that comes from a rider who has won national titles, a World Championship Bronze medal and competed at World Championships and Olympics.

“The Women’s Tour last year was an incredible experience. The amount of people watching and all the media coverage was beyond anybody's expectations and I know a lot of the riders were just blown away by it. What I found particularly special was how the people lined the streets despite the bad weather. “I had flown in directly from a stage race in the US so didn’t have much recovery time so had no great expectations. It was a surprise to win the jersey and an amazing experience all round.

“What made it really special was the feeling of being at such a big event with so many people and the professionalism of the organisation with exactly the same staff and standards as the men’s Tour. I really felt like a professional athlete that week, there have been some races in the past when you feel like you are going to a school camp! In addition there was an hour's TV coverage every night, a rare event in women's cycling.

“I haven’t had the opportunity to look at the course in person this year and it’s not an area of the country I know really well but I have studied the routes on the website and tried to glean as much information as possible. The last stage through the Chilterns looks quite challenging and of course the weather can always come into play, especially the wind. The roads in the UK are also heavy and that always makes the racing hard.

“What I do remember from last year is how quick some of the stages were. I'm not sure even the organisation were quite prepared for that, we seemed to arrive at the finishes ahead of the fastest projected times.  Perhaps with all the crowds lining the road the peloton reacted to all the energy. Whatever the course this year I suspect it will be raced very hard.

“It’s been a difficult season so far so far after I broke my collarbone at the Tour of Qatar in February. Since then it has been quite challenging because of the disruption to your race programme and sporadic racing but I'm right in the middle of a good block of training now and then I have an intensive spell of racing in the USA and a six day stage race, the Bira, in the Basque region.

“I will be heading for the Women’s Tour straight from Spain with only two days between and that can work two ways, I will either be flying with great form or I could be feeling it a bit smashed but that's bike racing. It tends to come at you in waves and in cycling and sport you have to try and take the opportunities when they present themselves. And you are never quite sure when that is going to be.” Laws has been no stranger to injuries over her career, starting as an amateur when they came with the territory as a tyro mountain biker. Then, when she turned professional, her participation in the 2008 Olympics was put in doubt when she was the innocent victim of a crash involving a BBC vehicle filming the GB squad training.

“Last season was fine but I had a really bad crash and injury in 2013 at the Cape Argus race in South Africa. It was a bit of a horror show and not dissimilar to Dani King's crash last winter except potentially it was even worse because I also broke some vertebra and collar bone at the same as all the rib fractures. In addition to multiple front and back rib fractures, a haemothorax and pneumothorax in my lung I had multiple transverse process fractures, a fractured vertebra and collar bone.

“The rehab and recovery was incredibly hard but I definitely  didn’t want to finish my career on such a negative note and thanks to Rachel Heal, the former GB Olympian, I had the opportunity to race last year with UnitedHealthcare which I thoroughly enjoyed.  They are an incredible professional team and it was great to experience the race scene in the US.

“At the end of last year I had intended to retire but a little to my surprise I actually had two firm contract offers on the table and it seemed silly going back to an office job when I could continue to race my bike. After seven years of bike racing I don't ever want to go back to an ‘office job’ again. I love the outdoors too much. “So I took the opportunity to sign with Bigla who are based in Switzerland because it meant I could stay at home in Girona. It's been a tough start with the broken collar bone but I am hoping for a strong second half of the season.”

Laws' story is worth revisiting because it is totally odds with the modern day emphasis on academies and young riders being fed into developmental teams and then a full time professional squad.  She has gone totally against the grain and offers hope to all those who find themselves outside the ‘system’. In road terms she came from nowhere, only attracting attention early in 2008 when, while working in Australia, she entered the Australian National Road Race Championship and finished second in a high quality field.

“I started racing in 2008, in fact I was working full-time for Rio Tinto in Australia right up until April 2008.  It was a big decision and the original impetus was to try and qualify for the GB team for the Beijing Olympics. So with that in mind I opted for a year's sabbatical really, I certainly didn't make a conscious decision to race professionally for the next seven years that just sort or happened but like I say a lot of sport is about taking your opportunities.

“After Beijing I was lucky to get contract offers by Cervelo in 2010 and Garmin Cervlo and then there was a chance to qualify for London 2012 which suddenly became another big motivation.

“And so it kept progressing. 2012 was a good year although I wasn't selected for London 2012. I had six UCI podiums and was a National Champion and ended with a Bronze medal in the team time trial at the world championships at Valkenberg. I considered retiring but was offered the chance to join Lotto Belisol and race under a split contract in Europe and South Africa which was an exciting prospect for me because I love South Africa.  That’s when my crash happened and wrote off my season.

“As a career it can be challenging and there are times – especially when you are injured and fighting your way back to fitness, when I have known I could be earning a lot more money doing my old job but then again what my cycling career has given me is an opportunity that so few people get. That is priceless and along the way I have met some incredible people and been to some amazing places.” “It’s hard to monitor my progression as a rider because I think the standard in the peloton is much higher than when I first started. In my first years there was a select group of climbers but now it seems many more girls can climb at a really high level. I've done a lot more speed work in the last few years and I think that has helped me in small group finishes. I am also more confident in the bunch. Moving around in the peloton with confidence is a big skill you can only learn with experience.”

Although you never mention a lady’s age you can do the maths and Laws accepts that despite the contract offers coming in with gratifying regularity over recent years retirement cannot be far away. What will she do when that moment comes?

“I love nature and environment and just generally being outside. So if can combine that with riding my bike and working with people I would be very happy. I have quite an interesting background in terms of the jobs I’ve done and the places I have been and I am genuinely interested in hearing what other people have done and where they have travelled.

“I worked as a guide for La Fuga on the Haute Route last year and to be honest when I retire I would like to continue that guiding and running amateur cycle training camps. I have no real ambition to work in professional cycling as a career, I would much rather be guiding with amateur riders and doing some environmental consultancy work. It’s a profession you can keep your eye in and I’ve managed to do some consultancy work every year except 2013. It’s been a necessity financially but it's also been really good to keep my contacts up.

“It will be challenging but I’ve worked with a range of organisations such as the UN, British Government, NGOs and the business sector so I am hopeful of finding work alongside my guiding and running training camps.”