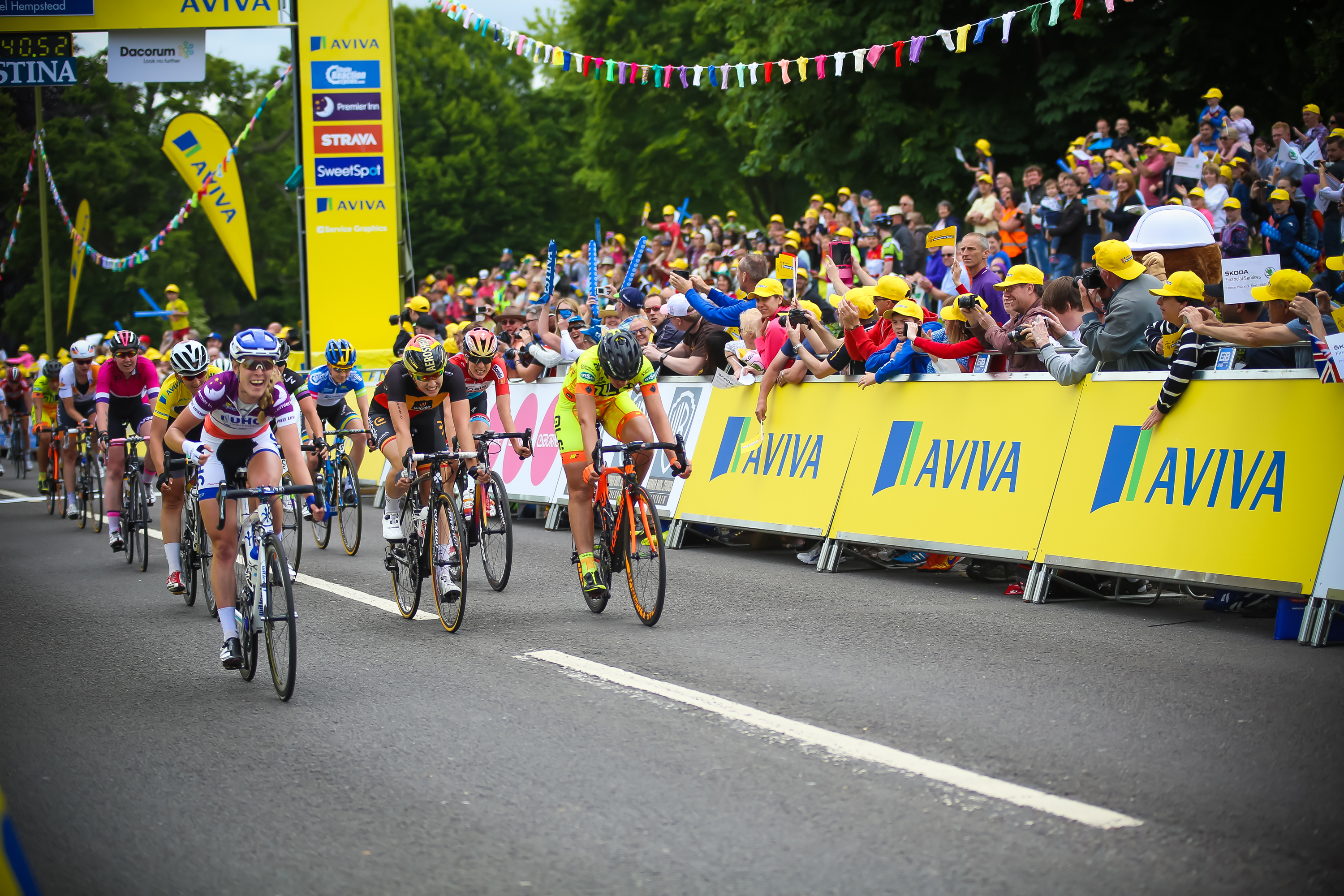 Last year’s Aviva Women’s Tour ended with Hannah Barnes scoring one of her biggest victories to date, with the win on the final day in Hemel Hempstead plus the Best British and Best Young Rider jerseys. With the race heading back to Hannah’s home county of Northamptonshire for the final stage of this year’s race, Tom Blackburn caught up with her after a turbulent end to the 2015 season.

Last year’s Aviva Women’s Tour ended with Hannah Barnes scoring one of her biggest victories to date, with the win on the final day in Hemel Hempstead plus the Best British and Best Young Rider jerseys. With the race heading back to Hannah’s home county of Northamptonshire for the final stage of this year’s race, Tom Blackburn caught up with her after a turbulent end to the 2015 season.

From being in the form of your life, to crashing, breaking a bone in your ankle, missing the chance to support Lizzie Armitstead’s World Championship win and having your leg in a cast for five months, would be enough to knock many cyclists love of the sport; but not Hannah Barnes.

The rider, who is originally from Kent, is still working on her comeback from an injury that occurred seven months ago, but is as hungry as ever. In 2015, the Aviva Women’s Tour was key in making a name for Barnes. She started the 2015 Tour without the attention of many, but by the time she had finished the week she was the top Brit and Best Young Rider, and won the fifth and final stage between Marlow and Hemel Hempstead.

As she looks past her immediate comeback, Barnes told us how the Aviva Women’s Tour is undoubtedly one of her favourite weeks of racing.

“It was right up there with my top weeks as a pro,” said Barnes.

“Coming back to Britain is always enjoyable and racing on roads that I know and have spent a lot of time on added to making it very special. To do so well in front of all my friends and family, and those who have been there through my whole cycling career, made it one of the best weeks of the year. With that in mind, I am looking forward to coming back this year.

“It gave me a lot of confidence; I hadn’t raced much in Europe through the season so I went into it not really knowing how I could do alongside the best European riders. But as the week went on I gained quite a lot of confidence and felt like I was able to compete. “When we looked at the finish of the final stage the evening before, I thought if I was in a good position going into the last few hundred metres I could use the wheels and so it was a relief when I did it because of all the pressure I had put on myself.”

That wasn’t the end of a successful summer for Barnes who later finished seventh place finish in the British Road Race Championships, behind her sister Alice who finished second.

However as the season neared to an end Barnes crashed and suffered a break to the talus (a complicated anklebone that has three ankle joints attached to it). The injury cut her season fractionally short and agonisingly saw her miss out on supporting Armitstead’s Road World Championship win in America.

Barnes admits that missing out on the World Championships was very tough but accepts it is part of the sport.

“It was a pretty rubbish race to finish what had been a successful year, and I was pretty gutted because I was heading into the Worlds on good form,” Barnes continued.

“It took quite a while to sink in and hit me that I wasn’t going to be competing at the Worlds. Because I have spent so much time in America it felt like it was a bit of a home Championships, and that sort of compounded the misery. I knew Lizzie was going into it as favourite so I would have loved to ride alongside her.

“I still went to the race; I had paid for my parents to fly out so I spent three weeks over there waiting for them and then we did a two week road trip leading up to the race. Obviously my sister was also taking part so it wasn’t a wasted trip. I did find it quite hard to watch but these things happen to everyone at some point in their career.

“It would have been great to be part of that team but I was still able to join them after the race, I just couldn’t contribute in the race itself. I had dinner with them the evening before and I could tell at that point that Lizzie was super-confident and relaxed.”

Clearly glad that she was still able to spend time with the team despite not being involved, Barnes is now concentrating on the year ahead of her. Unfortunately, Hannah’s broken talus meant a full five months in a cast and she subsequently wasn’t able to train through the winter.

Now the cast is gone, Hannah has been eased back onto her bike and looking to rebuild, starting with a short-term racing plan she has sketched out.

“I’ve only just been able to start training again because I had my cast on for five months, so the off season was very much an off season,” Barnes told us.

“What was good was even though I wasn’t riding at the team camps, I was still able to go and be there. It was nice to meet everyone, and when the others were riding I would go in the car and got to know the members of staff and sponsors really well.

“My schedule is only pencilled in so I will just see how we do, but to start I have a couple of races in Holland in April. Obviously it’s an Olympic year so everyone is gunning for the Olympics, but for me it’s concentrating on my recovery and if the races are going well we will just see.”

If you want to experience riding on some of the roads raced on by the pros in Northamptonshire for Stage Five of the Aviva Women's Tour, check out the Tour Ride Northamptonshire, the official sportive of the race. To sign-up via the British Cycling entry system, please click the below image.