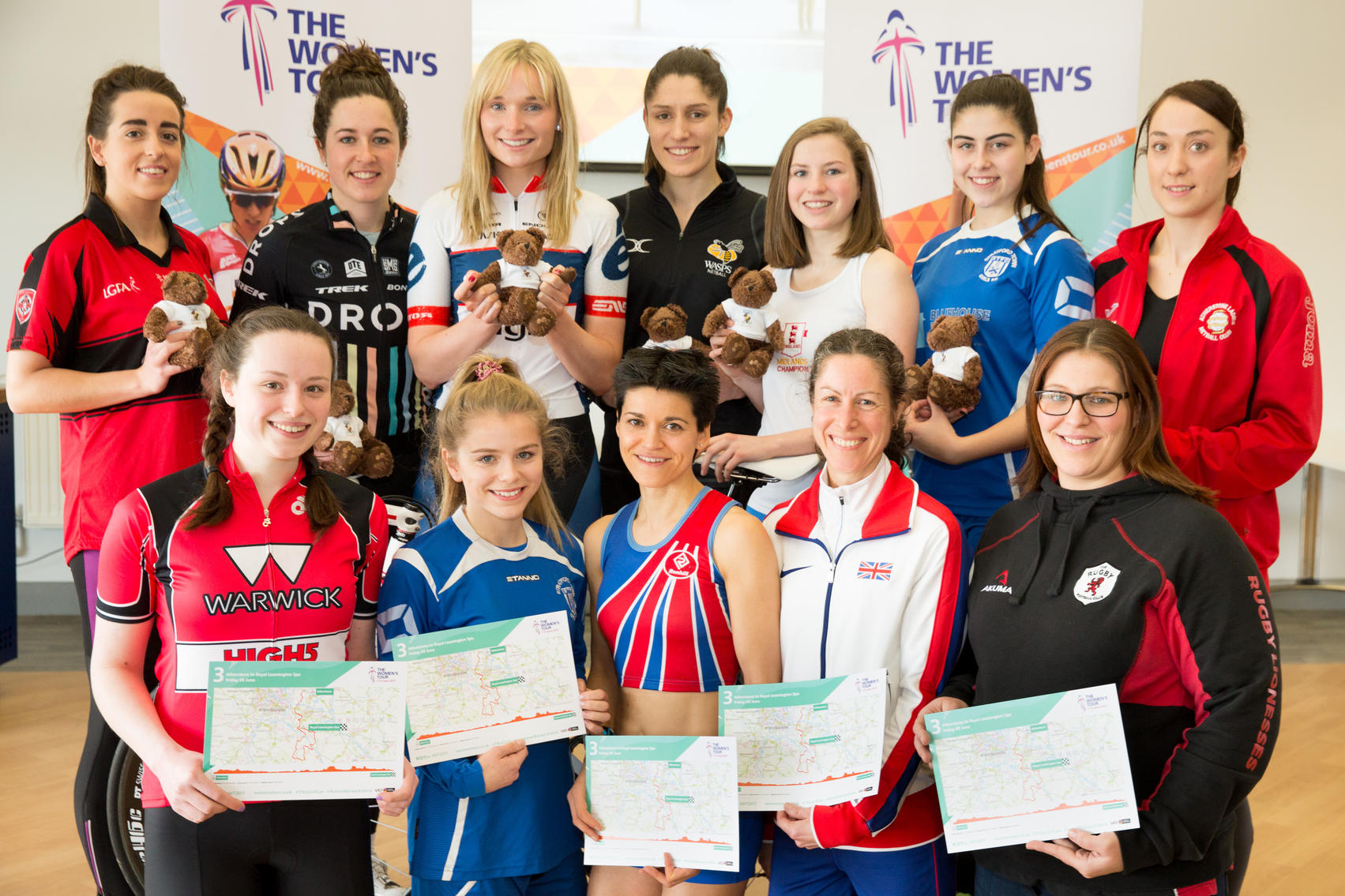 The Warwickshire launch of the 2017 Women’s Tour took place today at the University of Warwick with further details about the route announced, including the intermediate Sprints and Queen of the Mountains locations.

The Warwickshire launch of the 2017 Women’s Tour took place today at the University of Warwick with further details about the route announced, including the intermediate Sprints and Queen of the Mountains locations.

Warwickshire County Council announced that, in partnership with the University of Warwick, the county will be hosting Stage Three of the forthcoming Women’s Tour on Friday 9 June.

The launch, held at the world class campus of the University of Warwick where the Tour will pass through, was attended by many of the region’s top sportswomen including Kenilworth’s World and European Champion rider Ciara Horne of the Cervelo Bigla team.

Further details of the route through Warwickshire, that will face the world’s top female cyclists, were also revealed in the presentation including the sites for the two Eisberg Sprints (Warwick Rd, Kenilworth and Wellesbourne) as well as the two Queen of the Mountain climbs (Edge Hill and Burton Dassett). The Warwickshire route of The Women’s Tour will start in North Warwickshire with Atherstone once again playing host to the start. The county’s stage of the tour will then finish 150 km later in Royal Leamington Spa.

75,000 spectators lined the route last year, the first time the Tour came to Warwickshire and event organisers are hoping for an even greater turnout for 2017.

As well as showcasing some of the region’s famed countryside, the Tour also passes through some of its historic towns as well as through the campus of the University of Warwick. With a global television audience of around 80 million and daily televised updates of each stage, The Women’s Tour is set to showcase Warwickshire at its best.

Evaluation of the Warwickshire stage of the Tour in 2016 revealed that, of the 75,000 spectators, around 40,000 of them came from outside county. Of these nearly 15% stayed overnight generating over £500,000 for the local accommodation industry. The local food and drink industry saw £2 million generated by visitors while local shops also welcomed gross spending of nearly £750,000 by spectators from outside the county.

Cllr Izzi Seccombe, Warwickshire County Council’s portfolio holder for economic development said: “Having already seen what a tremendous event the Women’s Tour is, I am thrilled to see it coming back to the county. It creates a buzz that is felt for some time after the event and local businesses reported an increase in trade that lasted for weeks after last year’s event.”

Professor Simon Swain, University of Warwick Pro-Vice-Chancellor (External Engagement) said:
“We are delighted to be welcoming the Women’s Tour back to the University of Warwick. Since our inception the University of Warwick has been a positive driver of education, innovation, and cultural development throughout our region, and has shown the strongest commitment to providing equal opportunities for women and men to achieve their goals. This is reflected in our support for women’s sport to enjoy the same profile as men’s and to promoting leading women as role models for our university, our region and beyond.” Commenting on the Warwickshire stage, Mick Bennett, Women’s Tour Race Director, said: “We’re absolutely thrilled to be returning to Warwickshire again in 2017. The stunning countryside in the county is perfect for lots of exciting racing and we’re sure the world’s best riders will put on quite a show for all the thousands of spectators that come out to support.”

Cllr Philip Johnson, Chair of Communities Overview and Scrutiny Committee said: “A high profile event such as the Women’s Tour showcases what the council has to offer to a global audience. I am thrilled that so many of the visitors to the event last year were from outside Warwickshire.”

All of the world’s top 15 teams will take part in the race, which is a part of the UCI Women’s WorldTour, including the world’s number one team Boels Dolmans, of defending race champion Lizzie Deignan and Wiggle HIGH5. Making up the field of 17 teams in total will be British domestic teams Drops Cycling and Team WNT Pro Cycling.

The Women’s Tour will begin in Northamptonshire on Wednesday 7 June, with the opening stage between Daventry and Kettering before the second stage includes Staffordshire and the city of Stoke-on-Trent prior to the racers coming to Warwickshire and proceeding to Chesterfield and Derbyshire.

London will then host the final stage on Sunday 11 June. The route will take place over 14 laps of the same iconic 6 kilometre circuit as used by the men’s Tour of Britain, starting and finishing on Regent Street, St James and featuring the likes of Piccadilly Circus, Trafalgar Square and Whitehall on every lap.