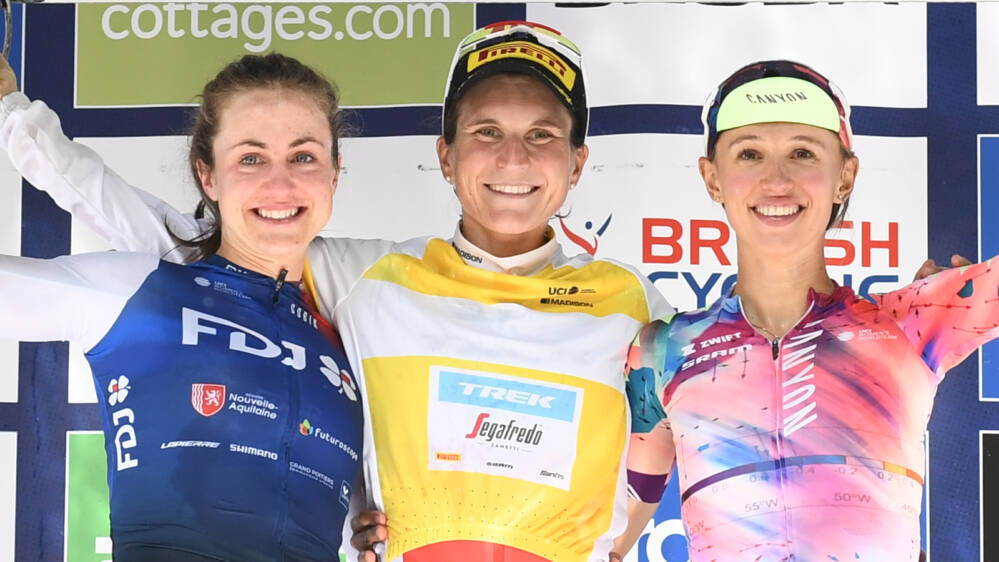 Elisa Longo Borghini was crowned Women’s Tour 2022 champion at the death in Oxford as she sensationally snatched the race lead away from overnight leader Grace Brown on the world-famous St Giles’.

Elisa Longo Borghini was crowned Women’s Tour 2022 champion at the death in Oxford as she sensationally snatched the race lead away from overnight leader Grace Brown on the world-famous St Giles’.

Longo Borghini (Trek – Segafredo) placed third on the stage – behind winner Lorena Wiebes (Team DSM), who claimed her third victory of the week, and Clara Copponi (FDJ Nouvelle-Aquitaine Futuroscope) – to take the overall crown by one second.

Longo Borghini, who never wore the race leader’s yellow jersey at any time during the six stages, said: “This is a big relief to win this race because it has been a strange spring for me.  Now I am back to my normal level. It’s nice to win an overall classification, this has not happened to me many times in my life.  It’s only the third tour I have won; this one is up there as one that ranks high.

“We decided to go for the intermediate sprint, and I was fourth so I was like okay, that’s the second place and that’s it. But then all my team-mates kept my morale up, and said we try at the finish and we’ll do the lead-out for you. I was really doubting, but when you see such a team that is motivated and they are really believing in you, just want to give them back everything.

“In the end, they all did a perfect job and Audrey [Cordon-Ragot] led me into the final 500m.  I know that in corners I am good, and I let some riders in front of me to take their draft, and I made my own sprint.

“We knew the finale was pretty technical and we studied it this morning with [director] Ina Teutenberg.  This is also why in the end I think they all believed I could do it because of the corners.  But again, I have to give big thanks to my team Trek – Segafredo.

“Lizzie [Deignan] sent me a nice message yesterday and said ‘remember my sprint in 2019’. That was such a close battle again with Kasia Niewiadoma and she made it, so yeah it was nice to hear from her about that.”

Niewiadoma at one point had looked the more likely to snatch the victory from Brown, having attacked on the day’s second ŠKODA Queen of the Mountains climb – amid packed crowds on the Hill in Burford – with an eye on the bonus seconds at the intermediate Pillar sprint soon afterwards in Carterton.

The former champion picked up a sole bonus second as Brown was first across the line to move three seconds clear of Longo Borghini and seemingly seal the overall victory.

When a large breakaway of 20 riders then went clear it seemed that any further chance of gaining time had gone. However, with Team DSM on the hunt for a third stage win of the week for Wiebes and the group too large to control, it was brought back before they gained any notable advantage.

The trio were caught five kilometres outside of Oxford city centre, which set up what proved to be an unforgettable final sprint.  Longo Borghini followed Copponi through the final turn onto St Giles’ and only lost one position as Wiebes sped past the pair to claim victory. Longo Borghini though held on to the crucial third place despite the fast-charging Tereza Neumanova (Liv Racing Xstra), who came within a wheel’s width of altering the course of the yellow jersey.

“I think we did again a really good job with controlling the race today,” said Wiebes. “We tried to use other teams with the lead-out and made some mistakes. The plan was actually to sprint with Charlotte [Koch] so I have double feelings with this result, this is not quite how we wanted it to turn out. So I can learn from this and take it to the next one.”

Elise Chabbey (Canyon//SRAM Racing) took home the ŠKODA Queen of the Mountains jersey for the second year running, as well as finishing sixth overall, helping her team to the team classification with three riders in the top 10.

Top British rider was Becky Storrie (CAMS – Basso) in 15th overall, thanks to her top-10 placing on Black Mountain in Carmarthenshire on Friday. Consolation for Brown came in the form of the Adyen combativity award, which recognised her efforts during the week.

Highlights of the sixth stage of the Women’s Tour will be on ITV4 at 8pm on Saturday 11 June and available on demand via the ITV Hub.