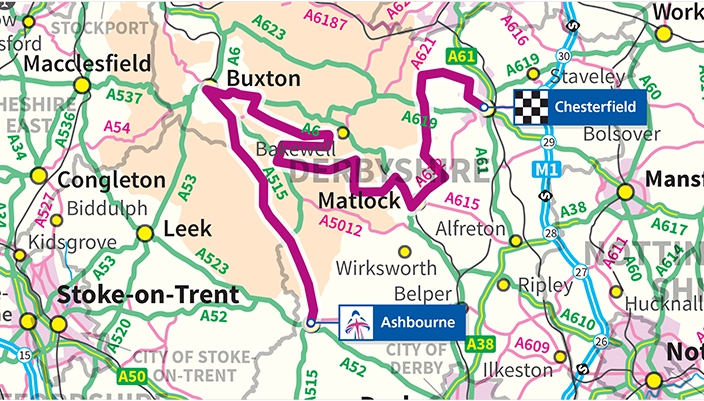 Derbyshire will welcome the Aviva Women’s Tour for the first time this June, as the world’s top racers head to the county for Stage Three of the world leading race on Friday 17 June 2016.

Derbyshire will welcome the Aviva Women’s Tour for the first time this June, as the world’s top racers head to the county for Stage Three of the world leading race on Friday 17 June 2016.

Building on the success of hosting the Tour of Britain last September and the recent launch of the Derbyshire Cycle Plan, which aims to make Derbyshire the most connected cycling county, the Aviva Women’s Tour will head to the Peak District for what will be the toughest stage of the race.

The world’s top racers, including the likes of World Champion Lizzie Armitstead and reigning Aviva Women’s Tour Champion Lisa Brennauer, will race from Ashbourne to Chesterfield, on a 112.6-kilometre stage, including 2,000-metres of climbing, that will pass the world-famous location of Chatsworth.

The stage will race through the heart of the Peak District National Park and locations such as Buxton, Youlgreave and Matlock, before the finish in Chesterfield.  Additionally the stage also falls on the same weekend as the popular Eroica Britannia family festival in Bakewell, just a short ride from the Stage Three route.

“It will be a great event to watch and we’d expect many visitors to the county to follow the progress of the world’s top women cyclists.”

Cycling fans in the county will also have the chance to catch the action for a second time a day later on Stage Four, which will also pass through Derbyshire on its way from Nottingham to Stoke-on-Trent.  Fans in the south of the county will be entertained by a route that skirts Derby between Long Eaton and Swadlincote.

“We are proud that Derbyshire County Council have decided to host the Aviva Women’s Tour as a part of their ambition to be the most connected cycling county.  Stage Three will take the race through the heart of the Peak District National Park, with 2,000-metres of climbing, making it one of the toughest of this year’s race and a key day for riders with the ambition of winning the Aviva Yellow Jersey.”

“It’s great to see how fast the Aviva Women’s Tour is developing. The route was already challenging, but now it’s going to be even harder, with the stages increasing in length and a lot more climbing added.

“This will take the Women’s Tour to the next level in 2016. To have attractive events like the Aviva Women’s Tour means a lot for women’s cycling. Great Britain is one of the front runners regarding professionalisation of our sport. I hope the crowd welcomes the adjusted route schedule as well. It’s partly thanks to the crowd the Women’s Tour has grown into an outstanding stage race.”

Further news about the detailed routes of Stages Three and Four, including the locations of Strava Queen of the Mountains climbs and the Chain Reaction Cycles Sprints, along with timings will be announced in the coming weeks along with the teams spectators can look forward to seeing in action at the Aviva Women’s Tour.