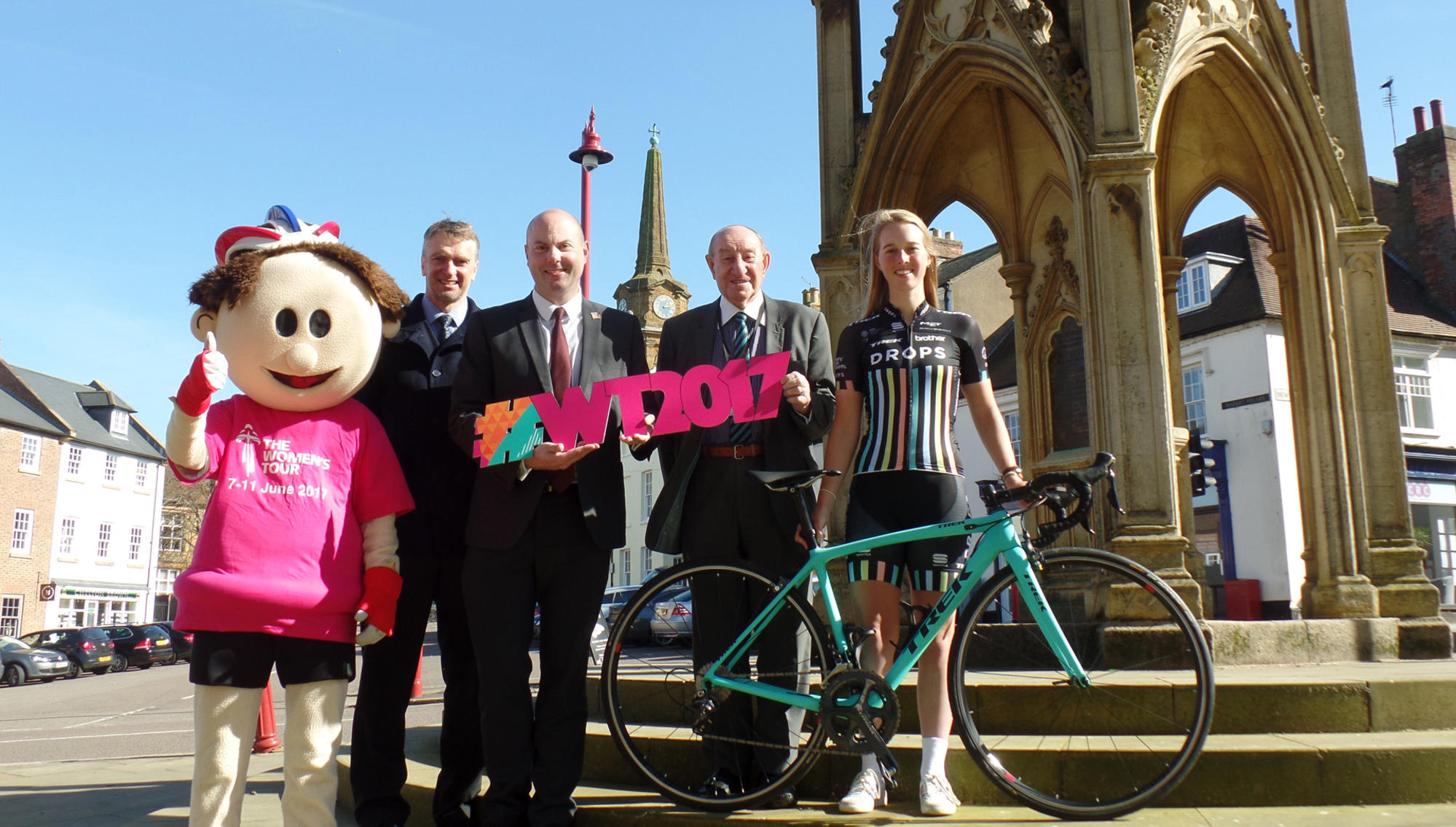 Daventry has marked hosting the Start of this year’s Women’s Tour with a pair of promotional events, kicking off the celebrations that will culminate in the Grand Depart on Wednesday 7 June.

Daventry has marked hosting the Start of this year’s Women’s Tour with a pair of promotional events, kicking off the celebrations that will culminate in the Grand Depart on Wednesday 7 June.

Drops rider Alice Barnes, who hails from Towcester, nearby to Daventry, visited the town last week to officially kick off the promotion for the Northamptonshire stage, which will begin from the High Street (Church Walk end) at 11:00. Speaking to the LoveDaventry website at the launch, Alice Barnes praised the amount of support she received on her home stage in 2016, looking ahead to this year’s edition.

“The level of support in The Women’s Tour is always amazing and in Northants I had people I used to ride with on weekdays supporting me on Newnham Hill and going into my hometown so that was really cool.

“Racing on home roads is great. We don’t get to race in Britain much, so to race on home roads around the county I grew up in is special. To ride on roads I know and to race on them is a massive benefit.”

Barnes has raced in all three UCI Women’s WorldTour events held so far in Italy and the Netherlands, taking a top 10 in the Ronde Van Drenthe shortly before appearing in Daventry.

“Preparations for the Tour are going well, I’ve had a good winter training and my season started well, so I’m looking forward to the Tour and having good legs coming into that.

“This year I’m hoping to improve on results from last year. Individual stages I had a couple of good rides but I’d like to string it all together and hopefully get a good overall finishing position. A couple of top tens and podium positions would be really good!”

The launch also revealed details of the stage start that will see the 102-riders passing through the town centre twice during the neutralised section, making Daventry a fantastic location not only to meet the riders before Stage One, but to also see them in action within the town.

You can also now find out more about the Stage One route in Northamptonshire for the first time, lower down the page. And if you’re inspired by the prospect of seeing the world’s top riders racing through the beautiful Northamptonshire scenery this June, just a week after the race you can get on your bike and join in with The Tour Ride Northamptonshire.

The Official Sportive of The Women’s Tour takes place on Sunday 18 June, starting and finishing from Delapre Abbey in Northampton, with both a 40 and 80-mile route that pass through Daventry and include Newnham Hill, which featured on the 2016 stage route.

Find out more information and sign-up to enter by clicking here.

More information on the Daventry Grand Depart can be found on the LoveDaventry website here including details of spectator parking and further details of the route within Daventry town centre.

You can check out the full route below, or download the PDF map from Northamptonshire County Council here.

Details of the two SKODA Queen of the Mountains climbs and intermediate Eisberg Sprints, sponsored by leading alcohol free wine brand Eisberg, will be announced in the coming weeks along with the ETA for the stage. In the meantime check out highlights from 2016’s Northamptonshire stage, which also finished in Kettering by clicking on the link below.