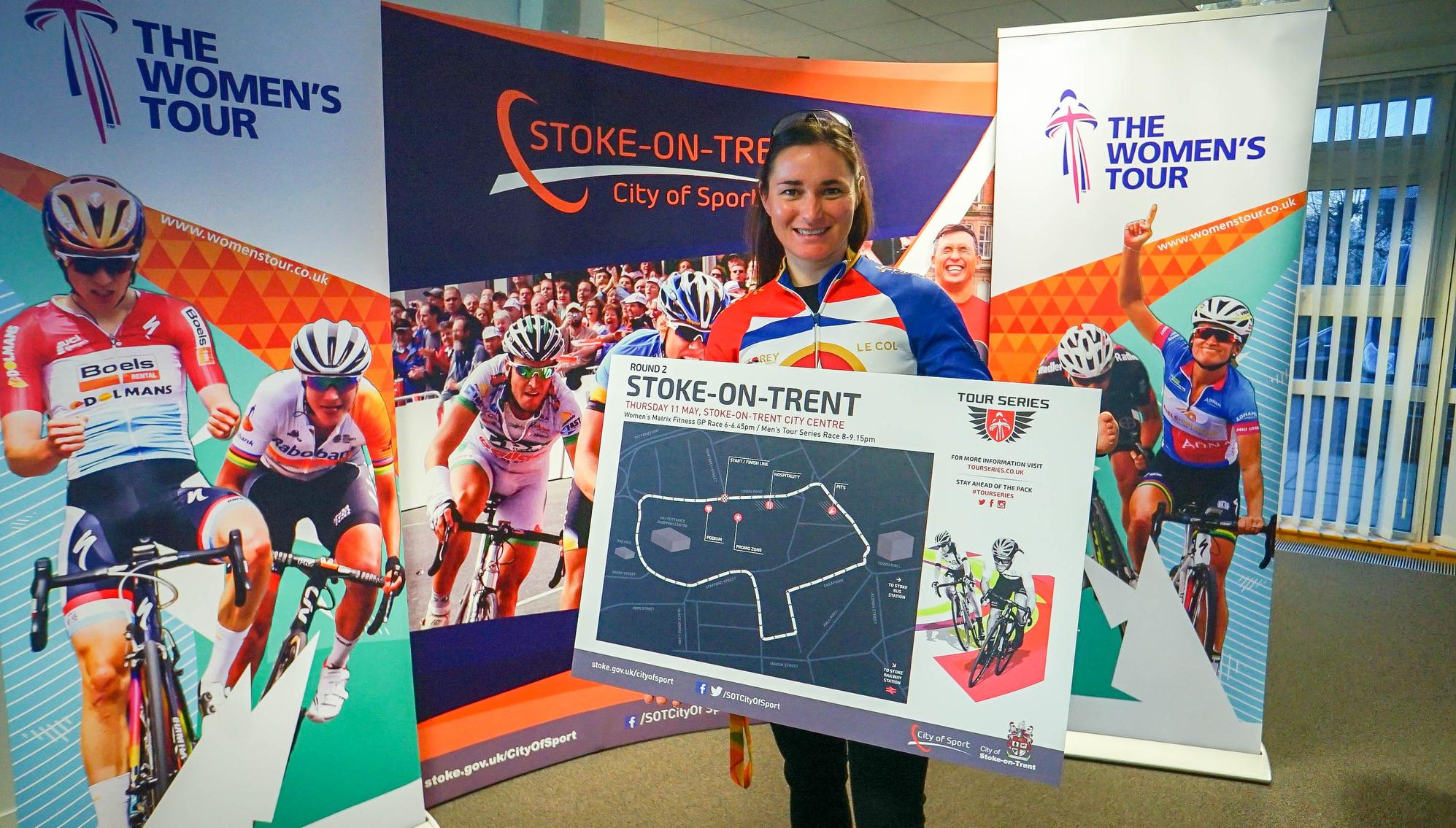 Paralympic legend Dame Sarah Storey heaped praise on Stoke-on-Trent’s positive attitude towards sport – as she helped to officially launch Stage 2 of the 2017 Women’s Tour which will start and finish in the city.

Paralympic legend Dame Sarah Storey heaped praise on Stoke-on-Trent’s positive attitude towards sport – as she helped to officially launch Stage 2 of the 2017 Women’s Tour which will start and finish in the city.

Great Britain’s most decorated female Paralympian was speaking at an event where full details were revealed for The Women’s Tour and The Tour Series.

Sarah, who will have her own team in the Tour Series event and has competed in the city in the past, said:

“Stoke-on-Trent is a fantastic city for hosting cycling events. Having cities like this which are up for it make a huge difference to cycling and sport in general, and people here should be very excited about the events which are coming.”

Stoke-on-Trent will welcome the world’s top female cyclists on Thursday, June 8 when the city hosts a stage of The Women’s Tour. Stage Two of the UK’s biggest professional women’s race will start and finish in the city centre, giving people the chance to get up close to the action as elite cyclists battle it out on the roads of the city.

All of the world’s top 15 teams will take part in the race, which will start on Upper Market Square, next to the statue of Sir Stanley Matthews, and finish 144.5km later back in the city with riders sprinting for the finish line outside Hanley Town Hall.

The stage will take riders on an anti-clockwise route through Joiners Square, Bucknall, Bentilee, Adderley Green, Park Hall and Meir. The riders will then head out into Staffordshire before returning to the city centre through Baddeley Green and Abbey Hulton, giving residents plenty of opportunities to catch a glimpse of the action for free. The Women’s Tour will be the second major cycling event to be held in the city this year, following on from Round Two of The Tour Series circuit race which takes place in the city centre on Thursday, May 11.

The Tour Series, which is coming to the city for the ninth time, will feature seven professional men’s teams (8pm), as well as the women’s Matrix Fitness Grand Prix Series (6pm), battling it out on a closed road, city centre circuit which starts and finishes on Town Road.

Before the races, the day will feature school activities and a corporate grand prix which local businesses and organisations can take part in. There will also be street entertainment around a promotional zone.

“We have a long and successful association with hosting top cycling events in Stoke-on-Trent but this will be the first time we have held a stage start and finish of the Women’s Tour, which is fantastic news. It will give people the chance to see top class cyclists in front of their own eyes for free.

“Combined with the Tour Series, these two events – which will both be televised on TV – will show off our city to a national and international audience as being a lively visitor and leisure destination, further supporting our bid to become UK City of Culture 2021. The races will also draw crowds into the city, which is great news for our businesses and economy, and will hopefully inspire more people to take up cycling and get active.” The Women’s Tour will begin in Northamptonshire on Wednesday, June 7, with the opening stage between Daventry and Kettering and also include stages in Warwickshire and Derbyshire, finishing in central London on Sunday 11 June. A one-hour highlights programme of every stage will be broadcast daily on ITV4 and available on demand via the ITV Hub.

Race director Mick Bennett said: “We’re delighted to be bringing our events back to Stoke-on-Trent. We have a brilliant relationship with the council who have an unparalleled ambition for bringing sporting events to the area and we are looking forward to being a part of their plans for 2017.”