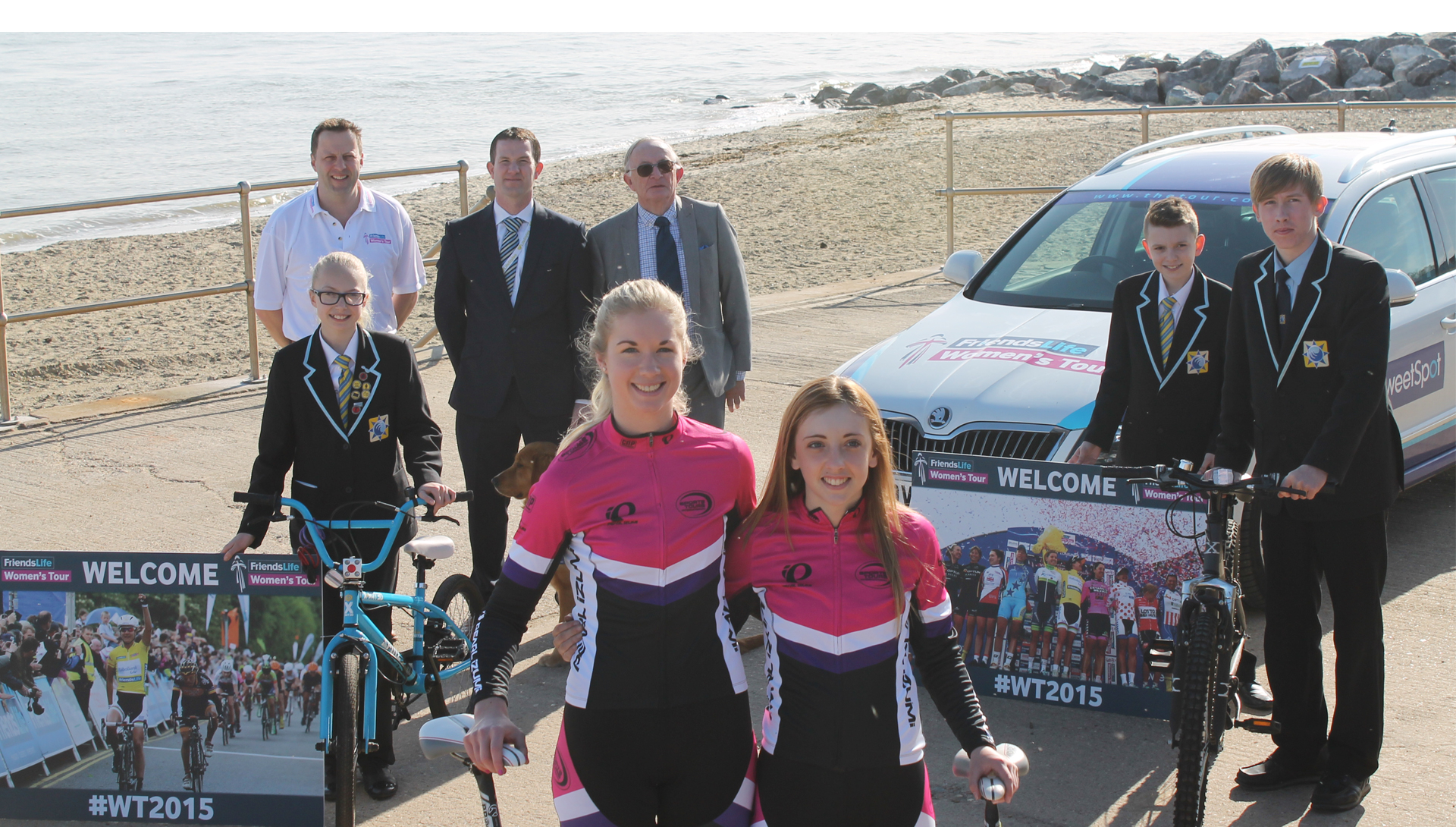 Tendring will be marked on the world cycling map for the second successive year this June, as Clacton once again welcome’s the return of the Friends Life Women’s Tour.

Tendring will be marked on the world cycling map for the second successive year this June, as Clacton once again welcome’s the return of the Friends Life Women’s Tour.

Clacton will host the finish of Stage Two on Thursday 18th June, in exactly 100 days time, with Pearl Izumi Sports Tours International riders Bethany Hayward and Gabriella Shaw visiting the seaside resort to mark the occasion and unveil more details of the stage.

Mick Page, Leader of Tendring District Council (TDC), said that the event had been a huge success last year and the Council is looking forward to more of the same this time around.

“The very day that the stage finished in Clacton last time we committed to get involved again in 2015 and we have kept that promise,” he said.

“It brought the cream of the world’s women cyclists to Tendring producing first class competitive action on our roads; it boosted the local economy by around £600,000 and put the District on the map in a worldwide sporting context.

“With 100 days to go the excitement is starting to build again and we look forward to giving the Women’s Tour a warm Tendring welcome and enjoying all the benefits it brings to the area.”

“The Tour is a great way of bringing people into Tendring, putting us on national TV and publicising the District to cycling enthusiasts around the world,“ he added. “What more can you ask for from an event and I cannot wait for its return. It really doesn’t get much better than that.”

The 138-kilometre, 85.8-mile stage, which starts in Braintree, will race through Essex and Suffolk, crossing into Tendring District in Manningtree and on to Mistley.

Riders will then contest two intermediate Sprints at Elm Tree Avenue, Kirby-le-Soken and Great Bentley Green as well as a Queen of the Mountains climb at Thorrington, with just 14-kilometres of racing remaining.

Passing through St Osyth, the route will retrace it’s 2014 route, bringing the race via Jaywick Lane past the Clacton Coastal Academy and onto West Road, before the finish on Marine Parade West, where Marianne Vos won Stage Three last year.

Joining Cllr Page and Cllr Mark Platt to officially launch Clacton’s hosting of the Stage Two finish were organisers and professional cyclists Bethany Hayward and Gabriella Shaw of the Pearl Izumi Sports Tours International team, who will be making their debuts in the race.

Highlights of Stage Two will then be shown on ITV4 that evening, with a repeat the following morning.

“We are pleased to be returning to Clacton and Tendring with the second edition of the Friends Life Women’s Tour,” said Race Director Mick Bennett.

“At 138-kilometres this, along with Stage Three, are the longest of the race and so could prove decisive. We know from 2014 that in this area of the world the wind can play a large part in the stage, so we are looking forward to another exciting day’s racing.”

Stage One of the Friends Life Women’s Tour takes place on Wednesday 17th June, heading from Bury St Edmunds to Aldeburgh on the Suffolk Coast in a 110-kilometre opening stage.

Subsequent stages then talk the race to Northamptonshire, Hertfordshire and Buckinghamshire and the Chilterns, before the overall finish in Hemel Hempstead on Sunday 21st June.