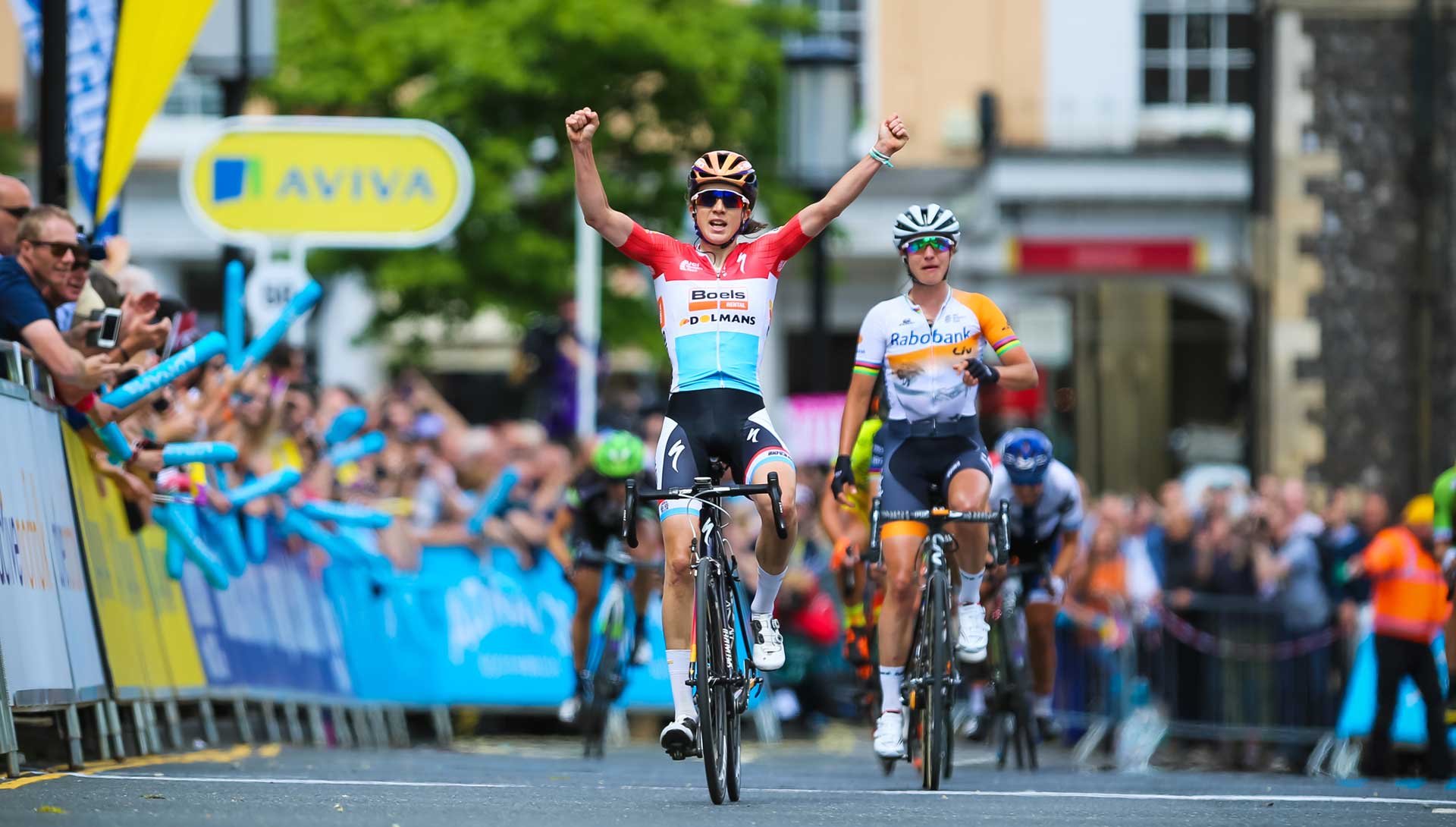 Christine Majerus sprinted to victory in Norwich to clinch the opening stage of the Aviva Women’s Tour and with it the Aviva Yellow Jersey of race leader.

Christine Majerus sprinted to victory in Norwich to clinch the opening stage of the Aviva Women’s Tour and with it the Aviva Yellow Jersey of race leader. The 31-year-old American spent the final 21-kilometres in a solo break on the Norfolk roads, building a lead at one-point of almost two-minutes.  But come the technical run through the centre of Norwich, and the uphill drag to the finish line in the Market Place the Cylance rider was pipped, holding on to finish eighth, just ahead of a six second time gap.

Tetrick did claim the day’s combativity prize for her fighting ride that so nearly paid fruit, especialy after she had been brought down in a crash earlier in the stage, until the final corner when first Majerus, and then Vos brushed her aside.

Majerus also claimed the Chain Reaction Cycles Points Jersey, with her stage win giving her the advantage over Vos, with the two level on 15-points apiece.

Top Brit on the day was Lizzie Armitstead in 18th, pulling on the Adnams Best British Rider jersey  with Dutch rider Ilona Hoeksma of the Parkhotel Valkenburg team holds a three point advantage in the Strava Queen of the Mountains competition over Orica AIS rider Taylor Wiles.

Highlights of Stage One will be shown on ITV4 at 21:00 on Wednesday 15 June, with a repeat on Thursday afternoon at 12:40.  The programme will also be available on demand via the ITV Hub catch-up service for 30-days.

The Aviva Women’s Tour resumes in Warwickshire, with its first ever stage in the county, heading south from Atherstone to Stratford-upon-Avon, via the likes of Kenilworth and Warwick.

Along the way the race will pass the National Cydists’ Memorial in Meriden, where a wreath will be laid to remember the cyclists of the First World War commemorated, and pass through the campus of the University of Warwick, who are partners to the stage.