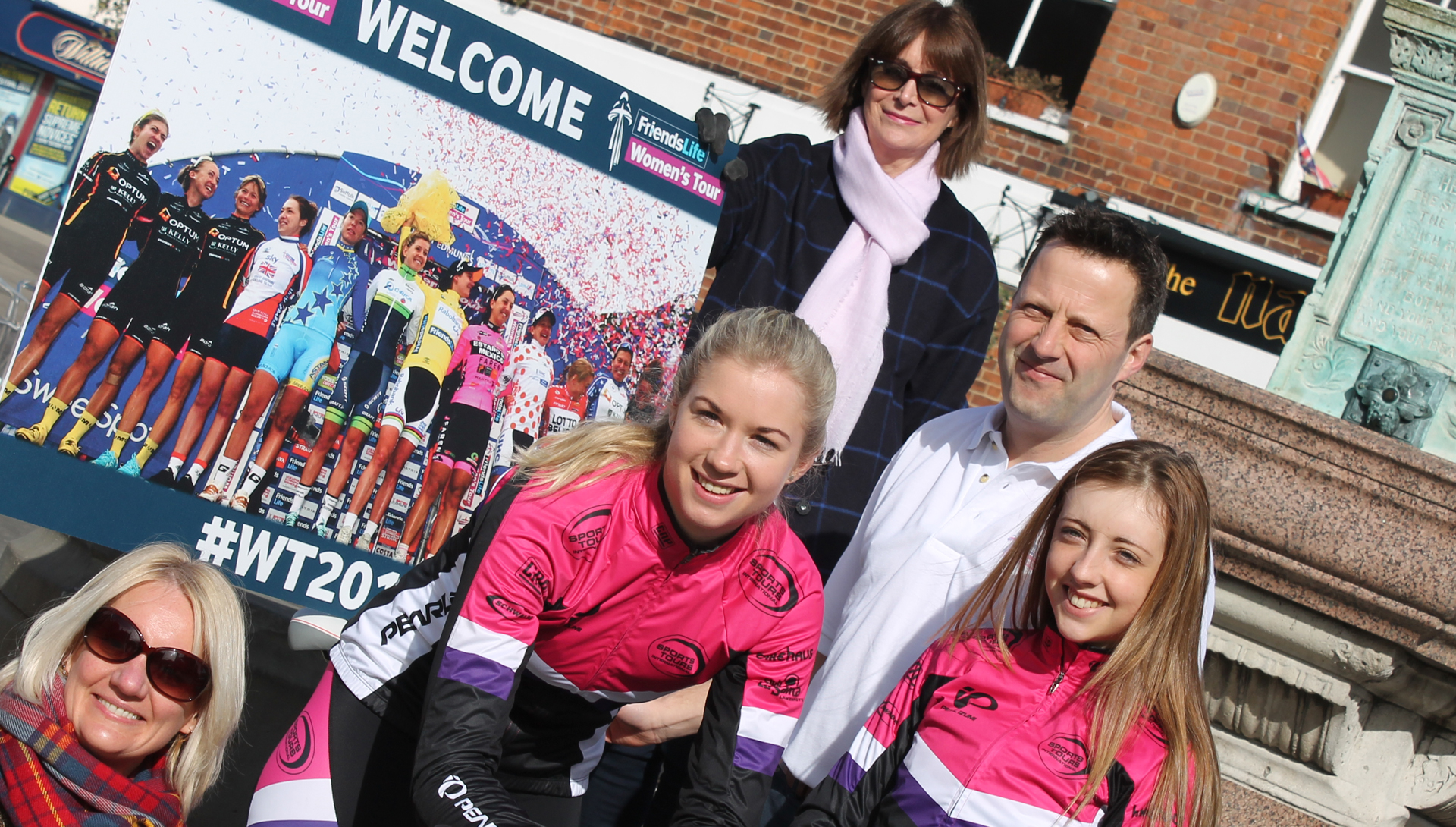 With 100 days to go until Braintree hosts the Start of Stage Two of the Friends Life Women’s Tour, riders and organisers joined officials from the town to mark the occasion this morning.

With 100 days to go until Braintree hosts the Start of Stage Two of the Friends Life Women’s Tour, riders and organisers joined officials from the town to mark the occasion this morning.

Braintree has today marked 100 days to go until the world’s top female cyclists arrive in Essex for the second stage of the 2015 Friends Life Women’s Tour.

The Essex town will host the start of Stage Two on Thursday 18th June, the first time it has welcomed  the Friends Life Women’s Tour following the visit of the Tour of Britain in 2010 and the Tour de France last year.

The 138-kilometre, (85.8mile) stage will start on Braintree High Street, rolling out of the town along Bradford Street and heading north along the A131 to Halstead – revisiting the finish line of the old Grand Prix of Essex – before taking in the historic Castle Hedingham, passing through Great Yeldham and finally leaving the district and crossing into Suffolk. From there the race will continue through Sudbury, Hadleigh and East Bergholt before entering into Tendring District at Manningtree, with the finish on Marine Parade, Clacton. Councillor Jo Beavis, Braintree District Council’s Cabinet Member for People and Participation, said: “We’re incredibly excited to be hosting the Stage Two start in Braintree, and to be able once more to invite the world’s top cyclists to race through our district. The Friends Life Women’s Tour route will take in the fantastic scenery of our towns and villages, bringing elite international sport right to our doorsteps, and we’re sure that the crowds that line the route will give all the competitors an enthusiastic welcome come June.

“It’s a privilege to be able to see some of the very best women athletes competing in a major event in our district, and we hope that it will prove an inspiring and unforgettable occasion for everyone who comes out to enjoy it. We know from the effect of the Tour de France that these events give great exposure to our district as a destination for tourism and leisure, and it’s clear that we have a lot to offer to visitors seeking something different.”

Joining Councillors Jo Beavis and Lady Newton to officially launch Braintree’s hosting of the Stage Two start were organisers and professional cyclists Katie Curtis and Gabriella Shaw of the Pearl Izumi Sports Tours International team, who will be making their debut in the race.

Starting from the Market Square in Braintree at 10am, 96 of the world’s top riders from 16 professional teams will be presented to crowds prior to the race, before heading away through the town centre and on to Halstead.

Highlights of Stage Two will then be shown on ITV4 that evening, with a repeat the following morning.

“Following on from Stage One held just up the road in Suffolk this will be another great opportunity for fans in Essex and Suffolk to again get up close to the world’s top riders,” said Race Director Mick Bennett.

“We are looking forward to visiting a new venue in Braintree, and working with Braintree District Council to make it a memorable occasion and one which we hope will inspire future generations of cyclists from the town and surrounding area.”

Stage One of the Friends Life Women’s Tour takes place on Wednesday 17th June, heading from Bury St Edmunds to Aldeburgh on the Suffolk Coast in a 110-kilometre opening stage.

Subsequent stages then take  the race to Northamptonshire, Hertfordshire and Buckinghamshire and the Chilterns, before the overall finish in Hemel Hempstead on Sunday 21st June.