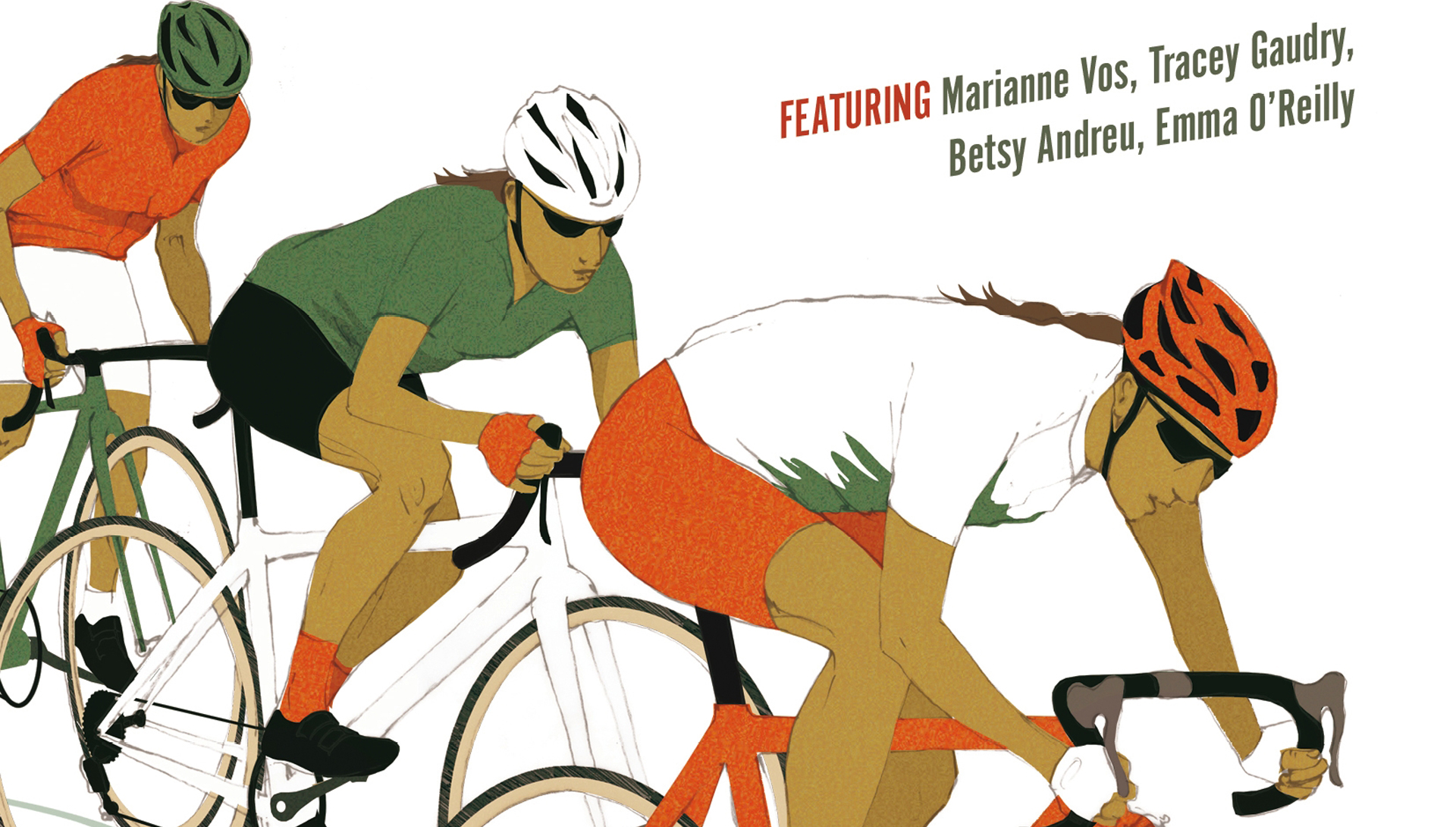 The latest book review from Brendan Gallagher is here, an anthology of stories focussing on women’s cycling, that claims to celebrate diversity from the professional sport to the club run, on the roadside and in the saddle, behind the scenes and on the massage table

The latest book review from Brendan Gallagher is here, an anthology of stories focussing on women’s cycling, that claims to celebrate diversity from the professional sport to the club run, on the roadside and in the saddle, behind the scenes and on the massage table

Ride the Revolution, the inside stories from women in cycling, Edited by Suze Clemitson
Published from 22 October 2015, Published by Bloomsbury, £16.99
Review by Brendan Gallagher
Available in all good book shops and online here from Amazon

Ride the Revolution is one of those books that just feels right from the moment it arrives in the post – size, look, tone and content all hit the bullseye from the moment you start flicking through it’s 30  chapters that all concentrate on an individual women and their stories, many of which are remarkable.

It celebrates the contribution that women make to cycling at every level, and their particular struggles and triumphs, but it’s not preachy or overtly feminist. The support and welcome that many women have experienced is recorded as well as the obstacles that have been put in their way. So this is very much a book on women in cycling as opposed to women’s cycling.  Riding legends, administrators, race organisers, World Tour Team chefs, soigneurs, writers, campaigners, Eurosport interviewers they are all there. What Ride the Revolution offers you is a fascinating conveyor belt of astutely observed stories and interviews, snap shots of cycling past and present and in so doing it pulls off the difficult trick of feeling both eclectic and definitive.

Women in cycling have their immense strengths and occasional weaknesses and foibles just as the men do. That’s nothing to do with their sex, it’s just the human condition and the best cycling writing almost always involves the human condition. Within a couple of chapters I started enjoying Ride the Revolution simply as a cycling book and had forgotten its basic premise. I’m not sure that was necessarily the intention but I would consider it a triumph not a failing.

We have Suze Clemitson to thank for bringing all this together, either interviewing the subjects herself or writing an appreciation or cajoling some of those concerned to put pen to paper themselves, or at least answer questions by email. Clemitson, aka @Festinagirl on Twitter, is also the author of 100 Tours 100 Tales and a regular and contributor to the Guardian’s website and a fine writer as she demonstrates right from the off with a wonderfully rounded tribute to Beryl Burton

In the blurb to the Burton piece Clemitson mentions that she had originally wanted Maxine Peake, who has written an acclaimed play on Burton, to contribute this showpiece introductory chapter but pressure of work had made that impossible and therefore she was undertaking the task herself. I’m sure Peake would have risen to the occasion but I doubt very much if she would have bettered Clemitson’s pen portrait.

For a start who could resist the introductory paragraph; “In the 1950s two women gloried in the twin initials BB.  One was poetry in motion, a superstar who left men grovelling in her wake. The other was Bridget Bardot.”

Many will be familiar with Burton’s 25-years plus of almost unrivalled success – if women’s cycling had been allowed in the Olympics she would have posted a medal haul beyond the reach of Chris Hoy and Brad Wiggins – but Clemitson’s take on combining that with being a wife and mother is unsentimental. Burton was a perfectionist and probably OCD – many champions are – and clearly found it difficult to separate sporting passions and family life. She could be quiet and moody before races, knitting furiously which her way of warning people was off. Conversation was not welcome.

At the 1976 National road race she was outsprinted for ‘her’ title by her daughter Denise and not only refused to shake her hand on the podium but informed her daughter there was no room in the family car and that she would have to ride home.

“It was not the sporting thing to do. I did our sport a disservice in allowing personal acrimony to intervene and I can only plead I was not myself at the time” she wrote in her autobiography Personal Best. Mothers and daughters temporarily falling out is as old as time itself and as Burton admitted another time “it wasn’t a romantic story but a real life narrative about basically ordinary people with jangled nerves and emotions.” The two famously made up a year later at the National Track Championships when Beryl stormed off after losing to Denise in the semi-final of the IP. This time Denise chased after her and there floods of tears and a reconciliation before the walked off arm in arm.

Talking of jangled nerves and emotions Eurosport interviewer Laura Meseguer has to deal with both every day of her working life as she sprints around the Grand Tours interviewing elated or depressed riders before and after every stage. Every sports journalist on the planet will know what a tough gig that is but in no time at all the Spanish born Argentinian raised Meseguer, who is fluent in four languages, has imparted a style and dignity to proceedings and clearly has the trust of the riders and teams. She may conclude every interview with a polite and genuine “Thank you very much and good luck” but she doesn’t hesitate to ask the awkward questions either, I particularly remember her putting Astana and Vincenzo Nibali right on the spot on a number of occasions this season.

Meseguer is one of the women interviewed who points to nothing but help and cooperation from the opposite sex in the very macho world of men’s road cycling and it probably helped that she was not previously a cycling fan but just chanced upon the sport because a journalistic opportunity opened up. She didn’t try to fake any specialist knowledge but was willing and keen to learn but, with that detachment from the sport, always has an eye for the human story rather than the racing narrative.

Before joining Eurosport she was a jobbing journo and I enjoyed the way that she reacted as a human being first and journalist second   at the 2011 Vuelta when Pablo Lastras rode the race of his to win in Tanto before the Vuelta headed for the Sierra Nevada the following day.

Both Meseguer and Lastras were good friends of Movistar rider Xavier Tondo, a specialist in the Sierra mountains where he based his training. Tondo had been killed in a freakish accident at home earlier that year and when Lastras got in the break she lived and breathed the race.

Having jumped into a Movistar team car for the day she asked the driver Sarafin Martinez to drive up to the break so she could cheer rather than report on her friend: “I’d never seen him riding that way, with anger and determination. It was as if he wasn’t riding alone, as if somebody else was pushing him. He looked at me and I said no more… After the podium and a big hug to the memory of our friend he gave me the flowers and told me ‘You know where you have to leave them’. And that’s exactly what I did the next day in the Sierra Nevada.” Things like that will earn you the trust of the peloton.

Elsewhere there is chapter from Kathryn Brown, another sassy tweeter on the cycling scene generally, who worked as the Race Administrator of the Aviva Tour of Britain for four years.. That rather dull title disguised s a manic roller coaster of a job that involved keeping a moving circus on the road, hiring and deploying up to 200 temporary staff, booking hotels at far flung locations around the kingdom, ordering up race signs and 101 other things.  It’s a job that actually defies description and as she happily admits in a close nit team the reality was that everybody pitched in and helped each other out at all times.

Brown interestingly has no great problem with podium girls, although she does much prefer them to be called presentation hostesses and quickly did away with the obligatory kiss for the victor and, as she says herself,  never asked one of the ladies concerned to wear anything she wouldn’t wear herself.

It’s an issue which causes much debate but Brown takes an eminently practical view.  Post-race there is a huge amount to do in a very short time, five or six podiums, jersey presentations, issuing of trinkets and prizes, posing for pictures with sponsors and dignitaries. To bring some organisation let alone a modicum of poise and glamour to such a flurry of activity is no easy thing and the role of presentation hostesses can be undervalued. I will leave that debate with you.

There is loads to enjoy in this book. Ashley Gruber is a cycling photographer whose reputation grows yearly while Rochelle Gilmore and Emma O’Reilly are known to one and all. You could almost hear the latter’s sigh of relief when she was simply asked to talk about what attracted her to cycling in the first place and the good early days at US Postal before it started to go wrong.  Connie Carpenter-Phinney, Marianne Vos, Yvonne McGregor, Tracey Gaudrey, Betsy Andreu and Hannah Grant the immensely talented Tinkoff Saxo team chef, they are all there as well. Highly recommended.

You can find links to previous book reviews from 2015 and 2014 by clicking here, where you’ll also find out about the annual SweetSpot Cycling Book of the Year Award.

Look out for more news about the 2015 award in the coming weeks, along with more book reviews ahead of Christmas.