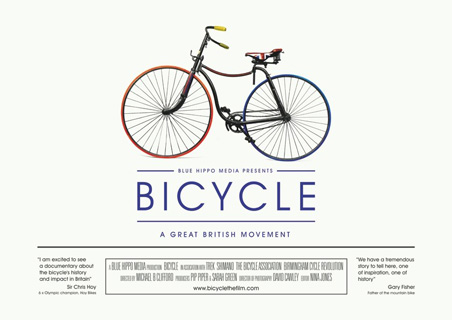 BICYCLE, which launched earlier this year, is a film by Bafta winning director Michael B Clifford and international award winning film producer Pip Piper of Blue Hippo Media and is out now on DVD.

BICYCLE, which launched earlier this year, is a film by Bafta winning director Michael B Clifford and international award winning film producer Pip Piper of Blue Hippo Media and is out now on DVD.

The film asks the question why is cycling and the bicycle back in fashion? It tells the story of cycling in the land that invented the modern bicycle, it's birth, decline and re birth from Victorian origins to today.

The film weaves bicycle design, sport and transport through the retelling of some iconic stories and features interviews with notable contributors including Sir Dave Brailsford, Gary Fisher, Chris Boardman, Ned Boulting, Dannielle Khan, Sir Chris Hoy, Tracy Moseley and Mike Burrows. “BICYCLE” is a humorous, lyrical and warm reflection on the bicycle and cycling and its place in the British national psyche.

The film opened to great success and is now available on DVD. Producer, Pip spoke of the film’s success; “It really does seem to have captured the imagination and encouraged people to get back into cycling as well push on with the cycling they are doing.

“One element we were really keen on was that the film was not all male dominated and there is indeed lots of female focus in the film including riders and footage from the The Friends Life Women's Tour of Britain.”

The DVD is the perfect gift for christmas, along with the official film poster which you can get fuss free here: www.bicyclethefilm.com/shop

Keep an eye on the @thewomenstour and @TourofBritain Twitter accounts on Friday 28th November, as we will be running an exclusive Bicycle Film competition!