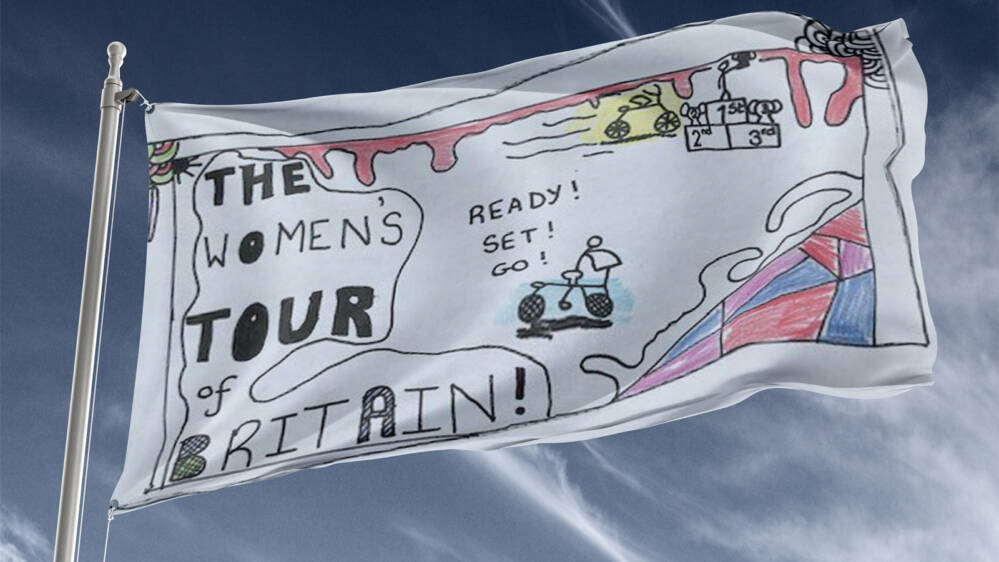 The Glory Farm Primary School pupil’s design was judged the best by cyclist Katie Scott, who is from Faringdon – she will be competing in the race on Monday. Over 100 children contributed artwork.

The young artist’s creative design includes stylised cyclists with winners’ podium, proudly declaring the start of the AJ Bell Women’s Tour. Reuben even took time to decorate the flagpole to add to his eye-catching entry.

Families and school children are expected to line the route between Bicester and Banbury to cheer on the competitors, turning the event into an exciting community spectacle and an incentive for residents to exercise, inspired by their favourite cyclists.

Reuben said: “I am really keen on women’s sport and I believe that it should be followed and celebrated just like men’s sport. I wanted my flag to show this. I think this event will promote sports for younger women and I am excited to cheer on the cyclists as they ride through my town, Bicester.”

Oxfordshire cycling star Katie Scott said: “I’m really excited to get the chance to race on home roads in front of a local crowd on Monday in Oxfordshire, and I feel that the flag design conveys the excitement of that feeling brilliantly.”

Councillor Andrew Gant, Oxfordshire County Council’s Cycling Champion, said: “We want this prestigious race to leave a legacy for the county; not only a lasting economic impact, but by motivating people to be more active and improve their health.”

The world’s best riders will race from Bicester, continuing through Oxford and Abingdon, to the finish in Banbury.

From the start line on Bicester’s Sheep Street, the race will complete a short northern loop, passing secondary school students at The Cooper School, before heading south past Graven Hill to Islip and on to Oxford. The peloton will then sweep down to The Plain then onto south Oxfordshire via Blackbird Leys. The stage will reach its southernmost point passing the Culham Science Centre before heading north through Abingdon, Eynsham, and past Woodstock.

The riders will pass through north Cherwell taking in Hook Norton, Sibford Ferris and Broughton arriving in Banbury for the first time. They will then head back out through Bloxham completing a short loop of parishes before returning to Banbury where they will pass the Cross and the Fine Lady statue on their way to a sprint to the line on South Bar Street.