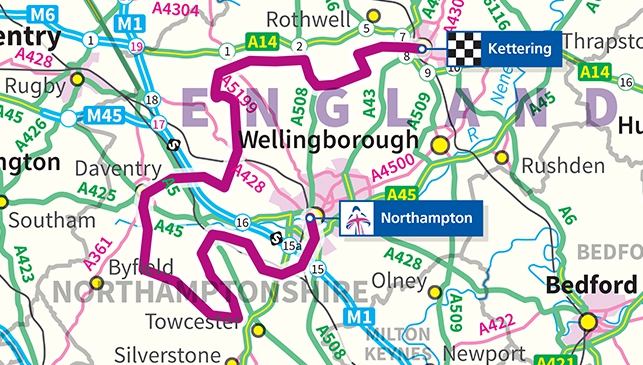 Northamptonshire will host the final stage of the 2016 Aviva Women’s Tour, with the route starting in Northampton town centre and finishing in Kettering.

Northamptonshire will host the final stage of the 2016 Aviva Women’s Tour, with the route starting in Northampton town centre and finishing in Kettering.

The last stage of the five-day international women’s cycling event will take place in the county on Sunday 19th June and attract some of the world’s best female riders.

Last year’s race saw a massive 67,500 people line the streets to cheer on the cyclists and saw a £1 million boost to the local economy. The event also inspired 65% of spectators to cycle more often, according to an independent report.

“Northampton and Kettering have both hosted the finish of the race before, Northampton in its first year in 2014 and Kettering last year, so we’re very much looking forward to the prospect of working with them again.

“I would urge people across the county to come along and support the riders on what is sure to be a fantastic day – and hopefully the crowds will be inspired to get cycling too!”

Northampton Borough Council leader Cllr Mary Markham, said: “We are pleased to welcome the Aviva Women’s Tour to Northampton which is a fantastic opportunity to not only encourage more women and girls into sport but also raise the profile of Northampton and encourage visitors to the town.”

Northamptonshire County Council will now work with event organisers SweetSpot to finalise the details for the route through the county.

“The final day will be an undulating stage taking in some new climbs and areas of Northamptonshire that we’ve haven’t visited with the previous two editions.”

Northamptonshire rider Hannah Barnes, who will compete as part of Canyon SRAM Racing team, said: “I travel all over the world racing, so to be able to race along roads I train on is a privilege. All my friends and family can come and watch, which is a real treat.”

Northamptonshire County Council has also agreed with SweetSpot that a stage of the Aviva Women’s Tour will be held in the county next year.

As part of the agreement, SweetSpot will also hold a mass-participation cycle event in the county this year and next year to encourage people, in particular women and families, to become more active and get cycling.

For more information about the Aviva Women’s Tour Northamptonshire stage and about cycling in the county, click here.

Below you can see highlights of last year's finish in Kettering which was won by Christine Majerus: