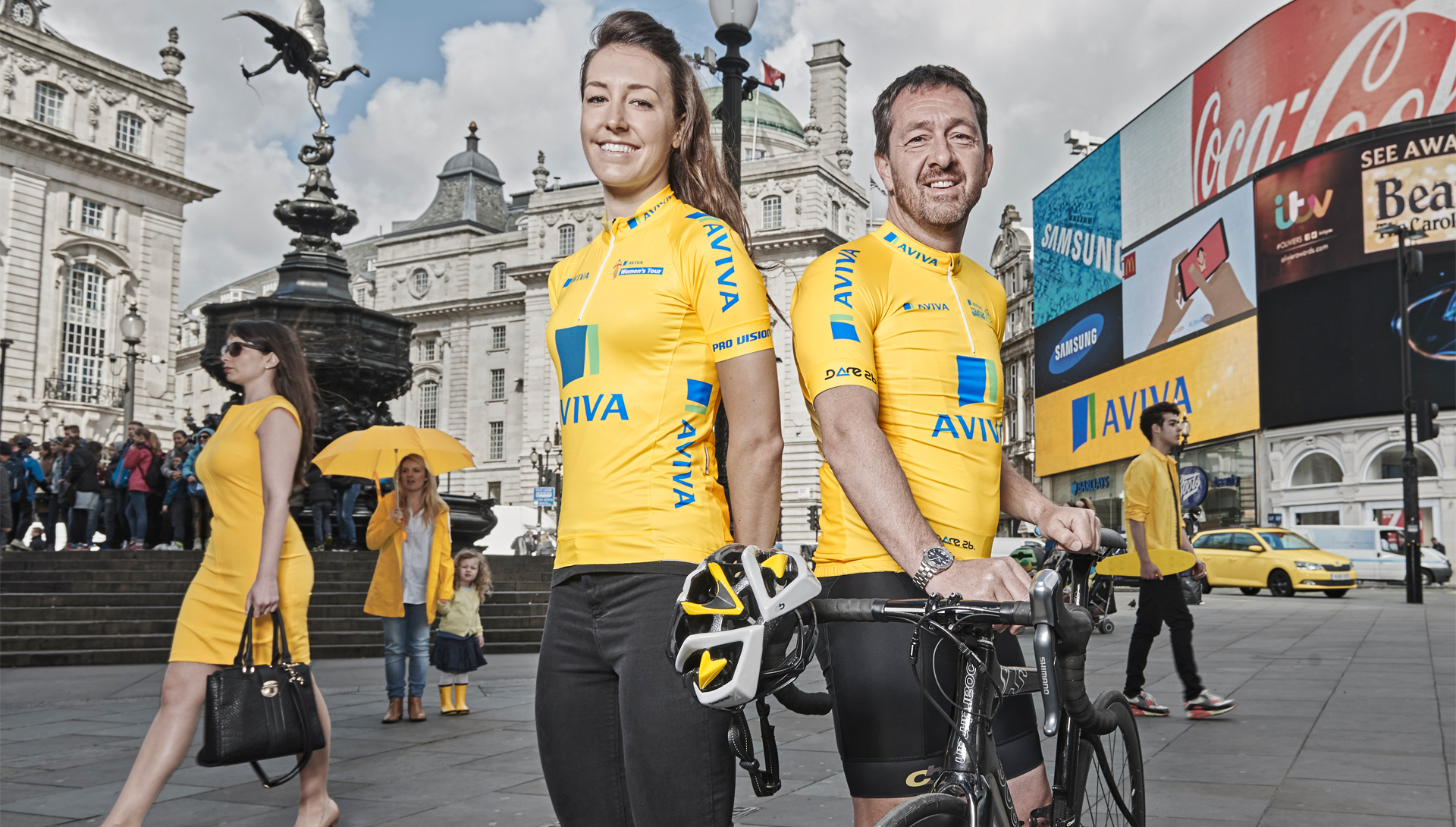 Aviva, the UK’s largest insurer, has announced it is taking on the title sponsorship of the most prestigious female and male professional cycling road races in Britain. The races will be renamed the Aviva Women’s Tour and Aviva Tour of Britain as Aviva takes on the sponsorship from Friends Life, which became part of the Aviva group earlier this month.

Aviva, the UK’s largest insurer, has announced it is taking on the title sponsorship of the most prestigious female and male professional cycling road races in Britain. The races will be renamed the Aviva Women’s Tour and Aviva Tour of Britain as Aviva takes on the sponsorship from Friends Life, which became part of the Aviva group earlier this month.

At the launch event in Piccadilly Circus, the new Aviva Yellow Jerseys for both races were unveiled, with the Aviva Women's Tour jersey pictured below. Among the guests there to mark Aviva’s new sponsorship were Olympic champions Dani King and Chris Boardman and Chief Executive of race organisers Sweetspot, Hugh Roberts. Aviva already has a long history of supporting a variety of different sports and currently has sponsorship deals in place with Premiership Rugby, Norwich City Football Club and the Aviva Stadium in Ireland.

“Taking part in the first ever Women’s Tour last year was incredible. To see so many people out on the streets to support the riders was a real buzz and I think this year’s race is going to be even better. To have Aviva on board as title sponsor, with their history of sport sponsorship, can only be a good thing for cycling.”

“Last year I did a lot of work around both these races, but particularly the Tour of Britain. The race helped to elevate cycling to a whole new level, and a large part of that has to go down to the sponsors.

“The introduction of a household name like Aviva as title sponsor gives the event a further boost. I was at the final stage of the Tour of Britain last year when it was a circuit around central London and the atmosphere was incredible. I have a feeling it’s going to be even better this year.”

“Cycling is a passion that has gripped the towns and cities across the country and we’re proud to be sponsoring both the Aviva Women’s Tour and the Aviva Tour of Britain. Aviva actively supports the communities we operate in and we have a long history of successful sporting sponsorships which we are now looking to build on with cycling. We are excited about how we can bring this partnership to life both for our customers and our employees.”

“Having a title sponsor last year helped us to take both events to a new level, reaching more communities and spectators than ever before. Now we have Aviva on board and I think we’re going to see something really special. Last year we had some of the biggest names in cycling taking part in the Tour of Britain, like Sir Bradley Wiggins, Mark Cavendish and Michal Kwiatkowski and we expect the same profile of riders to take part this year.

“For the Women’s Tour, last year’s race was the first one, but already it is being held up as an example to cycling organisations around the world of how a female cycling event can be a success. Making it the Aviva Women’s Tour will only enhance that and we are looking forward to an even bigger and better event this June”