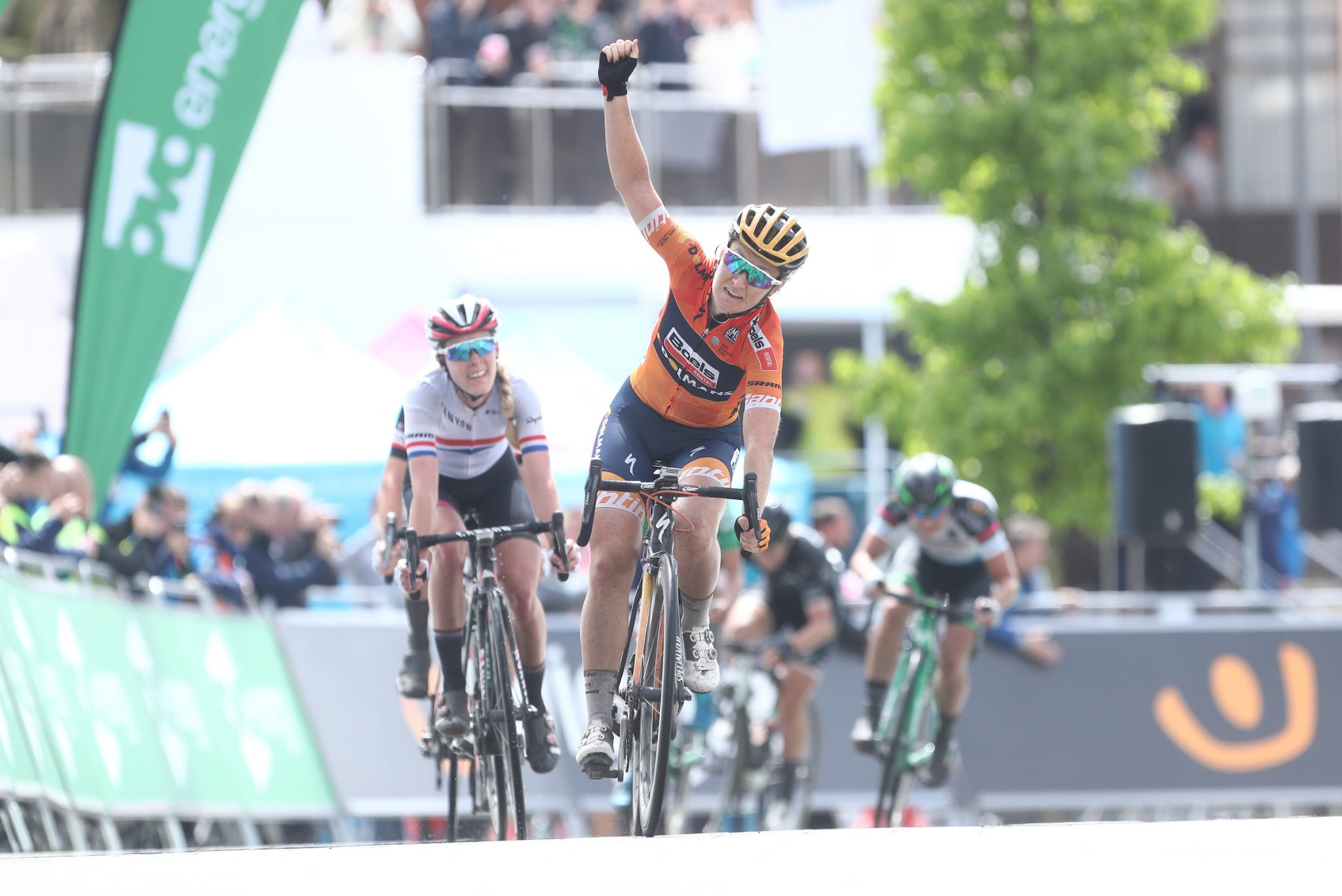 Amy Pieters surged to victory in Stoke-on-Trent at the end of the second stage of the OVO Energy Women’s Tour, pipping British Champion Hannah Barnes to the stage win as Katarzyna Niewiadoma retained the overall lead and the OVO Energy Green Jersey.

Amy Pieters surged to victory in Stoke-on-Trent at the end of the second stage of the OVO Energy Women’s Tour, pipping British Champion Hannah Barnes to the stage win as Katarzyna Niewiadoma retained the overall lead and the OVO Energy Green Jersey.

The Pole, who put in a dominant display to win Stage One in Northamptonshire on Wednesday, finished in fifth spot to maintain a 1-minute 46-second lead over teammate Marianne Vos, who came home fourth in the Potteries.

Barnes moves up to third overall thanks to the time bonuses and also takes the Adnams Best British Rider Jersey from her sister, Drops rider Alice.

“It’s bittersweet. I’m really pleased to be up there in the finish, it’s been a long time since I’ve been able to be aggressive and get a good placing like that,” said Barnes speaking afterwards. “But I’d have loved to have finished off the team’s good work today with a win.

“I love wearing my national champion’s jersey. It’s one that all the fans look for any every time I put it on I’m really proud. But the Adnams Best British Rider jersey is also really special, so it’s not a bad swap for tomorrow’s stage!”

The 93-rider field had toiled through wind and rain on the roads of Stoke-on-Trent and Staffordshire, in a fast paced stage that started and finished in the city centre.

Marta Bastianelli, Anna Trevisi and Alison Jackson all spent time at the head of the race, but the move of the day came when Lucinda Brand went clear on the steep, lower slopes of the opening SKODA Queen of the Mountains climb at Ipstones.

Trixi Worrack and Christine Majerus spent some time chasing, but all in vain as they were caught by a vastly diminished peloton before the final categorised climb of Gun Hill, with Brand holding her lead until the outskirts of Stoke-on-Trent as a thirty plus rider group made contact.

“It was a really hard day, we lost a bit of time on the GC yesterday so our goal was to go for the stage win,” said Amy Pieters of Boels Dolmans afterwards. “Our team was pretty strong today. Christine [Majerus] got in the front at one point and we were almost all there together going into the finish. We spoke about preparing for a sprint so they could save my energy, and the girls helped me really well in the finale.

“The climbs were really tough. The first one was long, the second was really steep and stayed steep all the time. We came back over the top of Gun Hill and I knew it was going to be a sprint. I’m really happy that the girls helped me today.” Two further hilly stages in Warwickshire and Derbyshire are ahead of Katarzyna Niewiadoma on Friday and Saturday, before the flat final stage in London on Sunday.

“I don’t want to overreact or get too confident, but this is another day done,” said the 22-year-old WM3 Pro Cycling rider who is also the Wiggle Points leader. “Everything can happen, as we saw today. It’s so hard to control it when lots of teams are attacking. I know that everybody wants that OVO Energy Green Jersey, so it’s like one team versus all of the others. It’s a big battle.

“There were a lot of times that I thought ‘oh my god, goodbye green jersey’. But you can’t lose hope, I tried to stay relax and calm. I knew that, even if Lucinda was going to stay clear upfront, other teams would want to target the stage win. That meant it wouldn’t be up to us to chase all the time; other teams would feel a responsibility to bring it back.”

Ten riders remain within two minutes of Niewiadoma including both Barnes sisters and Dani King.

Highlights of the second stage of the OVO Energy Women’s Tour are on ITV4 at 23:00 on Thursday 8 June, with a repeat at 10:30 the following morning on the same channel.  The highlights will also be available on demand via the ITV Hub catch-up service.

Stage Three on Friday 9 June takes place in Warwickshire, heading south from Atherstone to finish in Royal Leamington Spa.  The stage gets underway at 10:00 and is due to finish at around 14:15 on the Parade in Leamington, passing through Kenilworth, Warwick and Wellesbourne along the route.