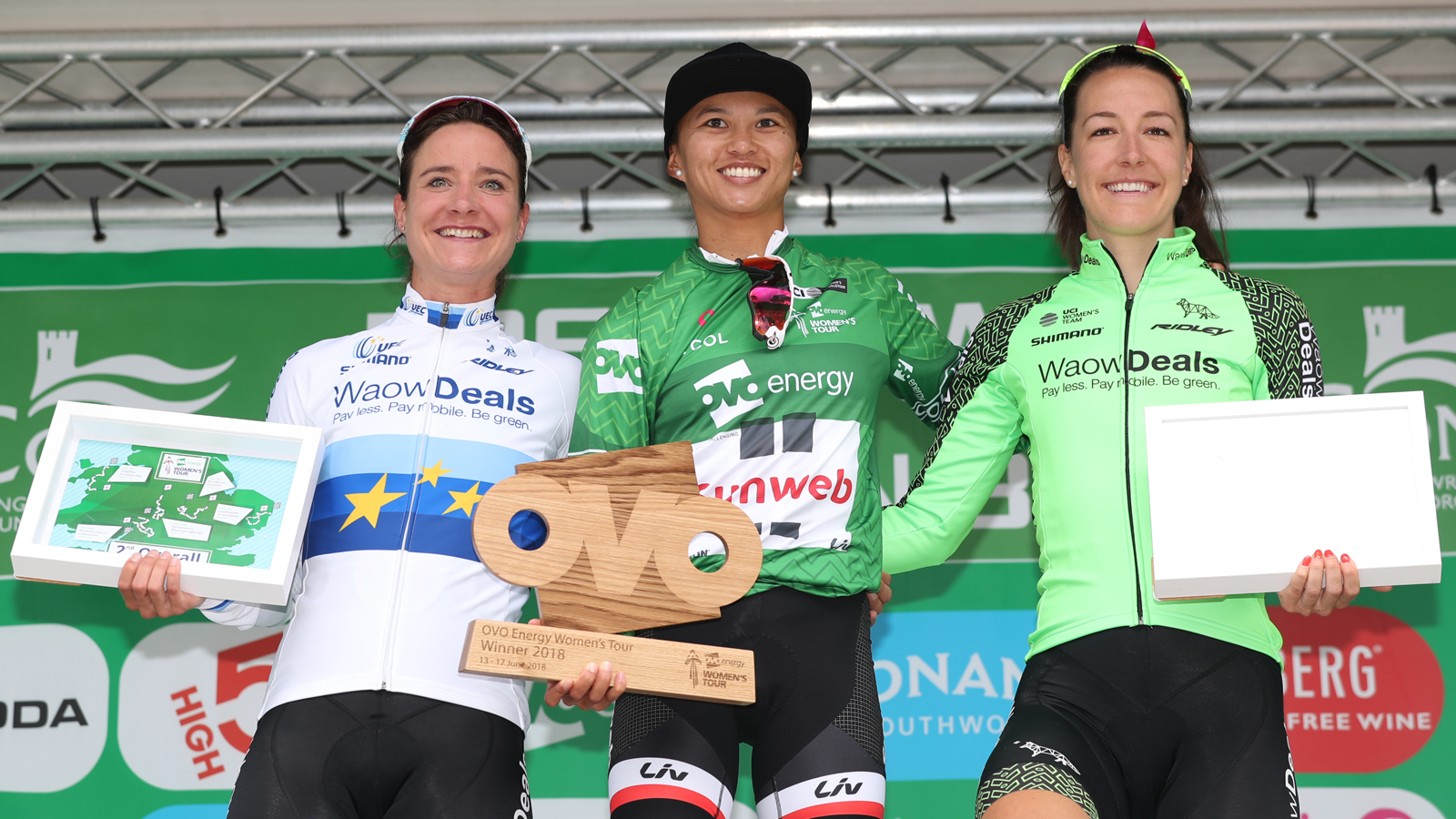 Despite crashing heavily during Saturday’s fourth stage, Vos’ team-mate Dani Rowe finished the 122-kilometre stage in the front group to maintain her third place on GC. She trailed Rivera by 25 seconds, while Vos ended up being just 11 seconds shy of the overall victory.

“Being in the leader’s jersey is all about being in control, having everything cool and under control,” said Rivera following her first UCI Women’s WorldTour stage race victory. “The girls and I did really well at that.  We set a really good pace on the climbs, there were a few attacks but eventually they came back.

“I’m really proud to have taken the win, the jersey belongs to the whole team.”

Commenting on the victory for Team Sunweb, coach Hans Timmermans added: “We can be super proud of the team. What they showed today and through the whole week is outstanding. They controlled the whole race and paced on the climbs; they were so strong that no one could attack. It’s really amazing and the win can only be for the whole team, they were super strong and executed the plan to perfection in the end.”

The stage once again boiled down to a sprint, albeit from a significantly reduced peloton, with Finnish national champion Lepistö coming out on top.

A number of riders had tried to escape in early moves as the race headed through Gwynedd in overcast conditions but none were a significant threat to the overall lead of Rivera, as Team Sunweb continued to control the race.

Lucinda Brand of the Dutch team led the race over the first SKODA Queen of the Mountains climb at Bwlch-y-Maen, while former World Road Race Champion Marta Bastianelli (Alé Cipollini) was first to the top of the day’s main climb at Nant Gwynant below Snowdon.

“Today there was nothing to lose,” said Lepistö following her second OVO Energy Women’s Tour win – her previous victory came in 2016’s final stage into Kettering. “We gave everything on the road and ended up with the victory, so I’m even more happy than yesterday [when she finished second in Worcester] . There was a strong wind; it was hectic final because no one really wanted to be in the front and use their best power.”

“I feel really proud to be a part of this team. It’s been a really special week,” said Rowe who was suffering the effects of injury following a late crash approaching Worcester during Stage Four on Saturday. “I was suffering out the saddle so I just tried to conserve as much energy as possible, riding on the drops up the climb to be as aero as possible and stay in contact with the bunch. After that I got more and more confident that I would be there at the finish. Marianne went for the intermediate sprint to help defend my third place from the two Boels [Dolmans] girls who were just three seconds behind me.

“I had my doubts [getting over the two SKODA Queen of the Mountain climbs], but my team and team-mates didn’t. They believed in me. When I survived the two climbs there was a big chance that it would end in the sprint so I tried to focus on it and try my best.” In addition to the overall title, Rivera also took the Eisberg Sprints Jersey, while Vos kept hold of the Breast Cancer Care Points Jersey that she took on Stage Four. Longo Borghini confirmed her hold on the SKODA Queen of the Mountains climbers’ jersey, with Maaike Boogaard (BTC City Ljubljana) taking the race’s Overall Combativity Award.

Speaking after the stage finish, Councillor Louise Emery, Conwy County Borough Council’s Cabinet Member for Economic Development said: “What a fantastic finish to the UK’s leading international stage-race for women, congratulations to Lotta Lepistö on winning the Welsh stage, and to Coryn Rivera on winning the 2018 Tour.

“Today once again highlights Conwy County is the right environment for great events, which are a Corporate Priority as laid out in the Events Strategy 2018-2022. Congratulations to race organisers SweetSpot again on the OVO Energy Women’s Tour and thank you for the worldwide media coverage.”

Click here for full results from Stage Five of the OVO Energy Women’s Tour from Dolgellau to Colwyn Bay.