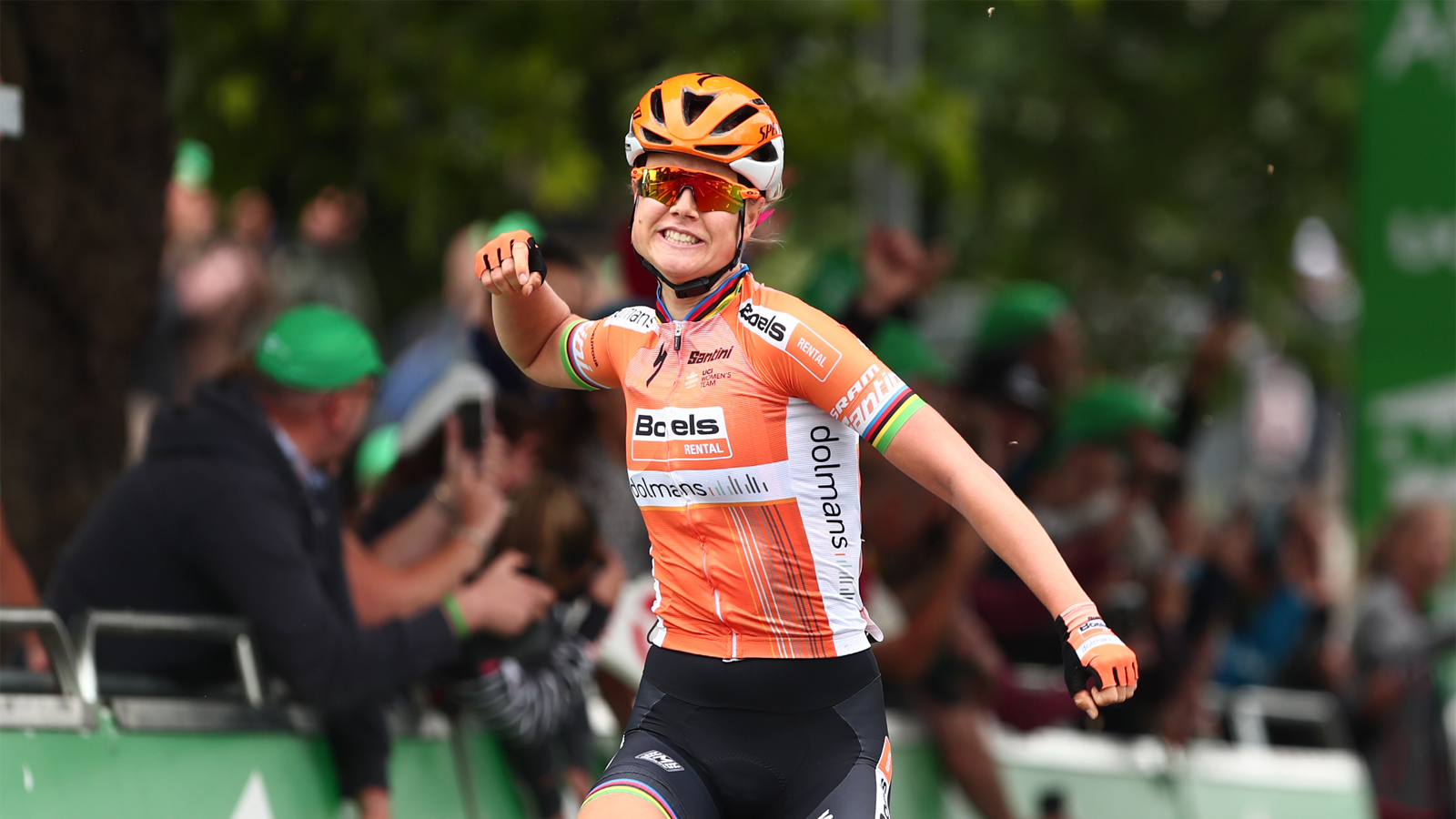 Coryn River (Team Sunweb) picked up more Eisberg sprint bonus seconds along the course, but the four Vos gained at the finish in Worcester saw the Dutch rider cut the gap to just 14 seconds with just tomorrow’s finale between Dolgellau and Colywn Bay.

A trio of riders, including Cecilie Uttrup Ludwig – who at one point was the virtual OVO Energy Green Jersey – were eventually caught on the outskirts of Worcester with seven kilometres remaining.  Ludwig (Cervélo-Bigla) and Audrey Cordon Ragot (Wiggle HIGH5) had joined early attacker Charlotte Becker (Hitec Products-BIRK Sport) just after the opening SKODA Queen of the Mountains climb at Snowshill on the edge of the Cotswolds.

The catch set up a fast finale, with the race heading past the world-famous cathedral and across the Severn, with Dideriksen (Boels Dolmans) sprinting to a clear victory ahead of Lotta Lepsstö (Cervélo-Bigla) and Marianne Vos (WaowDeals Pro Cycling).

“We knew everyone was going to be a little tired coming into the sprint but with about 30kms to go we decided that it’d be me we’d ride for,” explained the delighted Dideriksen, who won the World title in Qatar in 2016. “The girls did an amazing lead-out and, you have to be patient in the end but still go before everyone else comes from behind.  So I’m really happy I could pull it off.”

“You always want to prove that you are there as a rider but, we have a strong team here at this race and we all believe in each other and, although we haven’t won until today I think we’ve raced some good stages.  But obviously I’m really happy that I got another chance today, and having shown I have good form with my fifth place in the opening stage, with today’s stage suiting me a little better the team believed in me and gave me a really good lead out.”

“There was a really good stretch of cross tailwind and the girls did a great job and strung the field out with Boels Dolmans,” said Rivera. ”It made the race hard and it was all about controlling the break from that point on.”

Rivera sits 14 seconds ahead of Vos, with her WaowDeals team-mate and Adnams Best British Rider Dani Rowe third overall at 22 seconds, despite being among a small group of riders caught up in a crash inside the final three kilometres.

Four further riders sit within 30 seconds of the lead going into the final stage, predicted to be the toughest of the 2018 race as the OVO Energy Women’s Tour heads to North Wales for the first time.

“Tomorrow is going to be a hard day,” added Rivera. “Lots of climbers and Boels and Canyon [//SRAM], I’m anticipating, will make it difficult. As long as we stay together, there is a long way to the finish line after that last climb. Team work will be the most important thing tomorrow.”

Ludwig, who tried breaking clear from the breakaway group in the closing kilometres, added: “It was a hard day in the office but it was a lot of fun.

“We tried something today and maybe we didn’t fully succeed but it was super cool. Even though we get caught, it was cool that Lotta could finish it off with a podium. The whole team rode so well and day by day we are coming together and uniting as a group.”

Thanks to her consistent finishing Vos takes over the Breast Cancer Care Points Jersey with a four-point lead over Rivera, with the latter also continuing to lead the Eisberg Sprints Jersey.

Elisa Longo Borghini (Wlggle HIGH5) holds a 15-point advantage in the SKODA Queen of the Mountains category, and needs just a solitary point from the final stage to claim the climber’s jersey.

Click here for full results from Stage Four of the OVO Energy Women’s Tour from Evesham to Worcester.